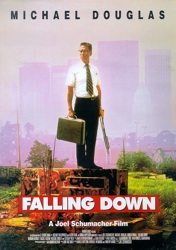 So often, these directors lists focus on filmmakers we all like and respect. But it's just as interesting to look at the essential movies of a director who gets very little respect.

Joel Schumacher didn't enter the movie business as a director. He was a costume designer first, which explains why so many of his movies are more concerned with clothes and production design than they are with being...what's the word? Good.

If you want to understand who Joel Schumacher is as a filmmaker, here are the 10 movies to watch.

1. St. Elmo's Fire (1985) - This wasn't Schumacher's first movie. That would be The Incredible Shrinking Woman in 1981. But this is the one that first established what a "Joel Schumacher movie" is. A vapid, self-absorbed movie about vapid-self absorbed people, St. Elmo's Fire is concerned almost exclusively with surfaces: physical beauty, material possessions, you name it. Seen now, it's a fascinating document of the yuppie generation and the '80s, but the film's smugness is nearly unbearable. This is the movie that both cemented and destroyed the Brat Pack both on and off screen.

2. The Lost Boys (1987) - Schumacher's next big movie is his first and only real "horror" effort -- a vampire movie for the MTV generation that's all about sleeping all day, partying all night, looking good and never dying. It's all stuff that Schumacher holds dear. While the movie is a mixed bag -- for all the stuff that's goofy and fun about it, there is a smug Corey Haim performance at the center and a bunch of bad writing and nonsensical plotting. There are flashes of a much better movie buried in it somewhere, but Schumacher seems intent on bringing out some of the worst elements. 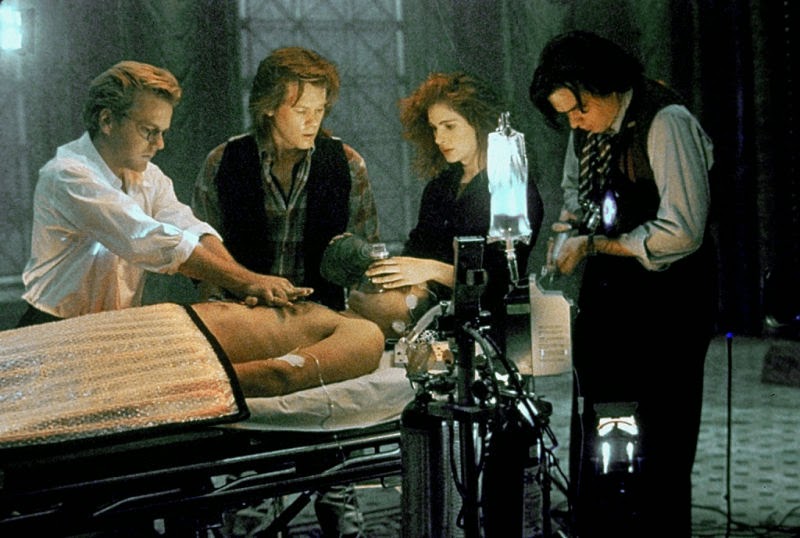 3. Flatliners (1990) - Despite the fact that it boasts a pretty ridiculous premise and too much style by half, Flatliners remains one of Schumacher's best movies. A solid cast (including Kiefer Sutherland, Kevin Bacon, Julia Roberts and Oliver Platt) and some good atmosphere sell the sillier aspects of the story, which finds a group of college students bringing themselves back from the dead to report on what they saw on the other side. The movie works because it was still made during the "B" period of Schumacher's career, when he was happy to make glossed-up genre movies and not necessarily "art." That period ends with Flatliners.

4. Dying Young (1991) - After grafting his signature style onto a couple of genre movies (whether it fit or not), Schumacher finally got to make a a film that reveals his big, sloppy heart. A big studio romance right out of the 1970s, Dying Young attempted to cash in on the post-Pretty Woman stardom of Julia Roberts. The results are too thin and sappy to hold up, but it represents a) Schumacher's attempt to make different kinds of movies and b) the fact that Schumacher can't get in touch with any genuine emotion, only MOVIE emotion. On the plus side, Schumacher was one of the first guys to try and make a movie star out of Campbell Scott. He was on to something there. It's amazing to think that Premiere predicted this would be the biggest moneymaker of the summer of 1991 -- a summer that also saw the release of Point Break, Robin Hood: Prince of Thieves and Terminator 2: Judgment Day.

5. Falling Down (1993) - Schumacher's first attempt at doing something "gritty" proved to be a total mismatch of filmmaker and material. Michael Douglas is very good and the film has developed a passionate cult of defenders in the years since it was released, but it's a tonal and narrative mess that's rescued by a few good scenes. What should have been the anguished howl of post-Reagan America is instead reduced to the rantings of a guy who was crazy to begin with, and Schumacher can't tell the difference between material that should be commenting on ugliness and material that's just plain ugly. Personal side note: I wanted to see this movie so bad when I was young that I walked 14 miles to see it opening weekend. It was not worth it. 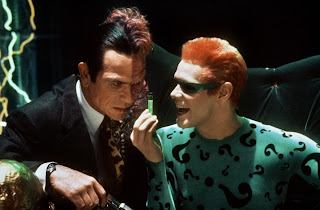 6. Batman Forever (1995) - Yes, Schumacher's second Batman movie, 1997's Batman and Robin, is more of a "Schumacher" movie in many ways -- namely, that it emphasizes costumes and production design, gaudy as they may be, over all else. But Batman Forever is the more interesting of the two because it shows Schumacher trying really hard to make a "good" summer blockbuster instead of just following a studio edict to sell more toys. Tacky as it may be (Wah! Bat-nipples!), there's a lot to like in Batman Forever: Val Kilmer is pretty good in the title role, Chris O'Donnell brings a lot as Robin and many of the shots look like they were taken right out of a pre-Frank Miller issue of the comic. People love to hate this movie, but Schumacher definitely made a big-budget comic book movie that belongs as much to him as the first Batman belongs to Tim Burton. In a world in which people can claim that MY Superman is the one that kills people and MY Batman is the one who repeatedly calls it quits, isn't there room for this interpretation, too?

7. A Time to Kill (1996) - Schumacher used his Batman Forever success to get another of his "classy" movies made and his second John Grisham adaptation (after The Client two years earlier). Like most of the director's "serious" efforts, this one is informed entirely by other movies -- Schumacher is nothing more than a mimic, and not a particularly good one at that. Here we have the Southern courtrooms and white knight (literally) politics of To Kill a Mockingbird combined with the histrionics and sweatiness of just about any Tennessee Williams adaptation. Schumacher assembles another good cast -- he knows how to get actors -- but either wastes them or calls upon their worst tendencies. Like he once did with Campbell Scott and would eventually do (more than once) with Colin Farrell, Schumacher does his damndest to make a leading man out of Matthew McConaughey. He was ahead of the curve on that one. 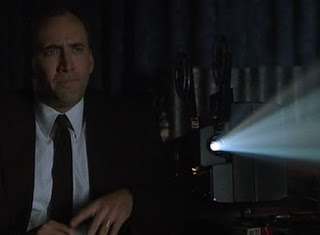 8. 8MM (1999) - Another of Schumacher's "dark" movies (see also: Falling Down and The Number 23) is perhaps his most egregious because it's very, very obvious that he has no connection to the material. He is chasing the trend established by David Fincher with Seven -- the gritty, dark, nihilistic crime drama. In his defense, Schumacher is at least working from a script by Seven screenwriter Andrew Kevin Walker, but that just highlights his "words-but-not-the-music" approach to the material. Another top-notch cast (Nicolas Cage overacts, but there's also Joaquin Phoenix, Catherine Keener and James Gandolfini) is wasted on melodramatic sleaze. Here's a movie that wants to look at the dark side of human nature made by a guy who is incapable of actually being dark. It's a fake.

9. Tigerland (2000)  - After two decades' worth of movies that were basically written off by the critical community, Schumacher got perhaps the best reviews of his career with this smaller character piece about two soldiers stationed in Vietnam. It should have made Colin Farrell -- making his leading man debut -- a movie star, but not enough people saw it. Still, it's a solid character piece and a different approach to a well-worn genre. Definitely one of Schumacher's best films, and proof that he should maybe have gone "smaller" more often. 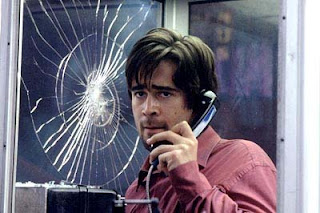 10. Phone Booth (2002) - When Tigerland didn't make Colin Farrell a movie star, Schumacher cast him again in this gimmicky, high concept thriller that repeats a number of elements of Tigerland (character piece, smaller scope, Colin Farrell) to lesser success. It was in development for a long time (at one point, Jim Carrey was attached to star at the height of his popularity), and Schumacher probably wasn't the right pick to make Larry Cohen's script. Farrell works a little too hard as a dickhead forced to stay in a phone booth or risk being shot by the sniper keeping him there. It's not really Schumacher's fault that this one doesn't work; he does little with the material, but the material isn't quite there to begin with. Luckily, Schumacher and Carrey would finally get the chance to work together in 2007's The Number 23. Maybe Phone Booth isn't so bad after all.