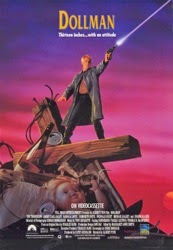 Most of the best movies produced by Full Moon Features were made between 1989 and 1995 under the company's short-lived deal with Paramount. The budgets were higher; the movies more ambitious. Full Moon head honcho Charles Band was still making DTV genre movies in those days, but they all felt like real movies -- there was production value and special effects and an ambition demonstrating that despite their (relatively) low budgets and DTV origins, the films wanted to stretch to the very edges of their potential. They were never content to be just product. Full Moon made a name for themselves in those early days because each movie made it a point to be something special.

That describes 1991's Dollman pretty perfectly. It's ambitious and works at the very edges of its abilities. If you're a fan of these kinds of movies -- you know, the kind I cover in Full Moon Fever -- it's something special.

It also brings together my beloved Full Moon with my beloved Albert Pyun, legendary director of nearly 50 genre movies, from Cyborg to Road to Hell. I have long thought this was Pyun's first collaboration with Charles Band, but now realize that Pyun's crazy sci-fi musical Vicious Lips was made for Band's Empire Pictures in 1986. Still, Dollman is Pyun's first time making a movie for Full Moon; his second and final film for the company, Arcade, was released two years later. I like Dollman a lot better.

The film begins on Arturos, a planet 10,000 light years from Earth. A criminal is keeping hostages in a laundromat. The police are in a standoff. Into the laundromat strolls suspended cop Brick Bardo (Thomerson), a sunglasses-wearing tough guy who's just there to do his wash. It's not long before Bardo is foiling the criminal in typically inventive fashion and getting chewed out by the mayor. Just as he's learning that he's being framed for murders at the laundromat, Bardo is kidnapped and brought to see Sprug (Frank Collison of The Last Boy Scout), a gangster who's now just a disembodied head floating around on a little disc ever since Bardo blew off the rest of his body. Bardo escaps and chases after Sprug in a ship, leading into an energy band that transports both of them to Earth, where they discover they are tiny compared to humans. Bardo is taken in by single mother Debi (Kamala Lopez) and her son, while Sprug joins forces with a criminal named Braxton (Jackie Earle Haley), who agrees to help Sprug fix his ship in exchange for a bomb that will take out several city blocks. The rest of the film builds to the showdown between the miniature Brick Bardo and the deranged Braxton in the streets of New York City.

Man, the first half hour of Dollman is terrific. Pyun, Thomerson and screenwriter Chris Roghair (along with an uncredited David Pabian and Full Moon head honcho Charles Band, who gets story credit) poke fun at every single cop movie cliche, from Bardo wearing sunglasses indoors at night (for which he is rightly mocked) to the way he speaks in stupid one-liners to him getting chewed out by the higher-ups. Even the way he strolls into the laundromat reminds me of Marion "Cobra" Cobretti taking out a psycho in the opening moments of Cobra ("I don't shop here."). It's clear that everyone knows exactly what movie they're making, and Dollman has a lot of fun teasing action movie tropes with its tongue planted firmly in its cheek. Star Thomerson is basically playing a variation on his Jack Deth character from the Trancers series (incidentally, "Jack Deth" is the only character name better than "Brick Bardo," so it's nice that Thomerson can lay claim to both). He's cartoonishly deadpan, and he's a hoot. 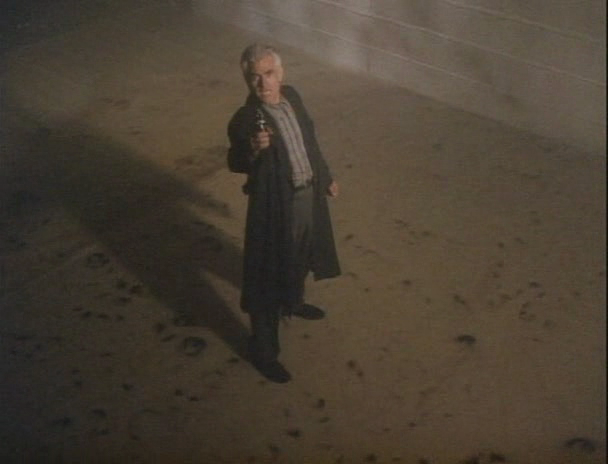 But the real masterstroke of the movie (that's right) is the notion that Bardo is only 13 inches tall on Earth. He's set up like every fascist super cop from every '80s action film only to have the piss completely taken out of him by revealing he's the size of a toy. It's a perfect inversion of the previous decade's textbook hero, parodying that kind of movie without actually being an outright parody. Even the reveal is handled perfectly, as there's no indication of the size differential during the scenes on Arturos. The computer on his ship tells Brick that the life forms on Earth are six times larger, but the voice is malfunctioning at the time and the words barely make it out -- we're given that piece of exposition, but it's buried in the background. Obviously, we know the "tiny cop" hook of the movie, but Dollman is structured and paid off like we don't. I love that.

Things get a little dicier once we're in New York. Because the movie's conceit demands that every scene with Brick be some sort of prohibitively expensive optical or special effect, the screenplay limits what we see him do. That means there's a long section in the middle of the movie in which Brick basically hangs out on Debi's counter while her song, his friend and the tenants of their building stand around and gawk. It's all handled with a fair amount of humor ("What's the fun of having an alien if you can't show it off?"), but doesn't change the fact that very little actually happens -- the movie fails to make good on its own premise. The filmmakers try to compensate by giving a lot of screentime to the bad guys, and there are some very funny surprises in the relationship between Braxton and Sprug (the way things are resolved between them has a certain logic, but it's not what we usually see in movies and it never fails to make laugh). Dollman was made during the lean years for Jackie Earle Haley -- you know, the ones between Breaking Away and Little Children -- but he still acts the hell out of his villain character, sweating and screaming and bleeding for the entirety of the film. It's sort of unpleasant. 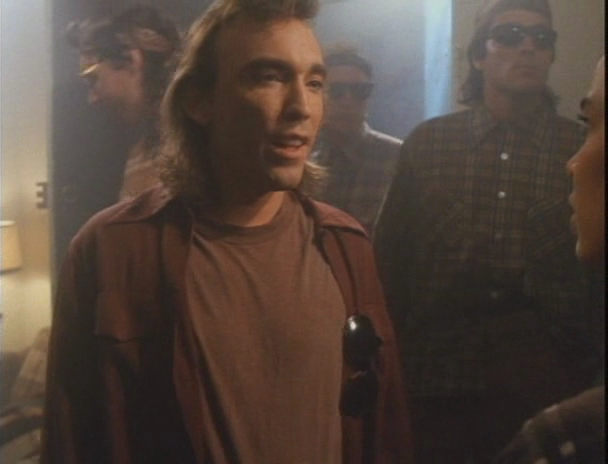 A lot of Dollman is sort of unpleasant, actually. Pyun shoots the movie in all oranges and dusty browns, like the ozone layer has completely worn away and the sun is killing the inhabitants of New York City every second they're outdoors. They're outdoors a lot. Everything feels scorched and dirty and ugly. There are still plenty of Pyun's signature shots -- he uses streaming light and smoke a lot -- and they're great; despite the ugliness of what's in the frame (not the actors), this is one of Pyun's best-looking films. It's a shame he usually only gets credit for his visuals from his most devoted fans. The forced perspective stuff is cool (Brick ends up standing on rocks a lot), the model and miniature work is fun. Plus the movie is crazy violent. It's established early on that Brick's handgun doesn't just put holes in bad guys, but rather makes them explode into chunks and pools of mushy goo. It seems excessive at first because it is, but it's actually a clever piece of exposition. How else do you explain why his gun is able to do any damage on bad guys when he gets to Earth? Dollman plays fair, too. Getting shot by Brick on Earth doesn't kill you. It just makes a big hole and hurts like hell. Just ask Braxton.

The biggest thing working against Dollman is its pacing. Despite running a trim 74 minutes before credits, much of the movie drags -- not entire scenes, mind you, but individual shots. Everything goes on a little longer than it should, slowing the film down when it should be clipping along. Maybe it really is just padding; without money for the additional effects shots necessary to put Bardo in more of the movie, Dollman has to find some way to reach feature length. It does so by never being in a hurry to get to the next shot. Once you become aware of it, it's impossible not to notice. 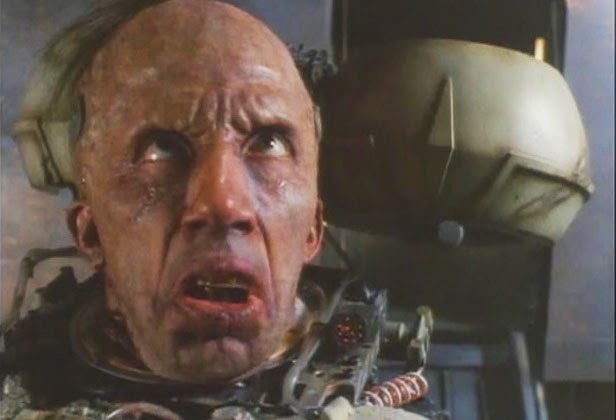 But these are minor complaints, because I genuinely love Dollman. For a movie with such a potentially silly premise (it could have just as easily been called Tiny Cop, and you know what film that would have been), there's a lot of cleverness built in to it. Pyun's direction is clever. Thomerson's self-aware performance is clever. The script is clever, budget shortcuts and all. Again, it all comes down to whether or not you're someone who likes these kinds of movies and knows how to watch them. The average moviegoer would see the silly premise, the handmade special effects and the fact that everyone is dirty and posing and not be in on any of the gag, dismissing it as being "stupid." Those of us who love this shit know that Dollman is made by people who love this shit and can appreciate just how it's all put together.

Thomerson reprised his role as Brick Brando two years later for 1993's Dollman vs. Demonic Toys, the first Full Moon mash-up that sequelized Dollman, Demonic Toys and even Bad Channels (Brick starts dating 11-inch tall Nurse Ginger [Melissa Behr] from that movie). It's fun in its own way, but more overtly campy than the original. Brick Bardo's size became the gag instead of the conceit. I prefer the way Pyun handles it, basically playing it straight while being aware that it's all sort of hilarious.

As the market dried up and there was less and less money to be made in DTV genre films, Paramount and Full Moon split in 1995. The budgets for Full Moon got smaller, making even movies like Dollman a budgetary impossibility. It remains part of the studio's Golden Age, boasting one of their best leading men, a beloved genre director and a future Academy Award nominee getting his arm blown off his body.

Buy Dollman on Blu-ray or DVD through the links below and support F This Movie!