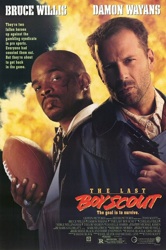 Because we're not yet done remembering the legacy of Tony Scott, let's take a look back at his best action movie and one of the few great buddy cop movies of the 1990s.*

The '90s were a transition period for action movies. Though all the greats were still making movies that were being released theatrically, the writing was slowly beginning to appear on the wall: the '80s were over, and, with them, the heyday of great action movies.

Released in 1991, The Last Boy Scout might as well be an '80s action movie, as it's basically just a holdover from the previous decade. Except the movie doesn't actually feel very '80s, aesthetically speaking, thanks to the fast and flashy direction by Tony Scott. It has the slickness and style that he was known for and, unlike a lot of pure action movies, it's artfully made. What makes it so satisfying for us fans of the genre is that even with its A-list production values, it loses none of the violence and brutality of the best B-level action movies. It's a mean-spirited, kill-crazy, profane, nasty movie. It's AWESOME.

In what is probably his second best role after John McClane (NO DUH), Bruce Willis plays Joe Hallenbeck, former Secret Service agent-turned-washed up private detective. His wife (Chelsea Field, Teela in Masters of the Universe) is cheating on him, his daughter (future scream queen Danielle Harris) hates him, he is in a constant state of hangover. He's hired to protect a stripper named Cory (Halle Berry, not really looking like Halle Berry), who SPOILERS is gunned down in the street. Joe has to team up with Cory's boyfriend, a disgraced quarterback named Jimmy Dix (Damon Wayans) to solve Cory's murder, which leads them into a huge corruption scandal that involves the entire professional football organization.

What is with the connection between pro football and action movies? There are action heroes who are football players, like Jimmy Dix in The Last Boy Scout and Boomer Hayes in The Taking of Beverly Hills. Then there are the actual football players who become action stars, like Brian Bosworth (Stone Cold), Howie Long (Firestorm) and Terry Crews (The Expendables). Aside from pro wrestling, no other sport has created more action heroes. Baseball? Nothing. Basketball? I guess Dennis Rodman in Double Team, but that's hardly a source of pride. Sudden Death was set in the world of professional hockey, but Van Damme wasn't even a player -- just a security guard. What's cool about Last Boy Scout is that it not only features a pro football player as a character, but is also about pro football -- or, at least, the sport figures heavily into the plot. The movie deals with a loss of faith in institutions, and there are few institutions more masculine and populist than pro football.

The Last Boy Scout was written by the great Shane Black (he also wrote Lethal Weapon) during his prime, at the time earning him a record paycheck of $1.75 million -- a record that would be broken when he received $4 million for The Long Kiss Goodnight, making him the highest paid writer in Hollywood. The script has a lot of the hallmarks that define a Shane Black script: fast, wiseass dialogue, corruption and broken systems, a love/hate relationship with Los Angeles (at one point, a typical Los Angelian actually has to pause and decide if he wants to give up his car or let a 13-year old girl be shot in the head). It's the kind of movie where the screenwriter ends up being the star, because there is so much emphasis on the dialogue and the little jokey one-liners. Tony Scott actually gets out of the way a little, too, dialing back on his usual eccentricities and show-offy camera work to let the dialogue and the relationships take center stage. It's still a great-looking movie, because Tony Scott didn't know how to make anything else, but the photography is there to service the story, not become the story.

Actually, The Last Boy Scout is one of those movies in which the characters speak ONLY in jokes. They literally can't stop being smartasses for two seconds. This will annoy many viewers. But unlike, say, Tango & Cash, which suffers from the same problem, at least a lot of the jokes in Last Boy Scout are smart and funny. It helps to have Bruce Willis delivering a lot of them, as he's so good at delivering Shane Black's sardonic dialogue that it's impossible to imagine someone doing it better (until Kiss Kiss, Bang Bang came around in 2005 to prove that at least two other actors could). He and Damon Wayans have good chemistry together and make a good team, and I like their dynamic: Wayans learning how to be an action hero, Willis tired of being one.

As a movie, The Last Boy Scout is beyond cynical. Seriously, it's so world-weary that it's even tired of being world-weary. But the cynicism is necessary, not just because the movie is steeped in the hard-boiled detective fiction of the 1940s, but because it's a movie about overcoming that cynicism and learning to believe in something again. Unlike so many action movies of the 1980s, it doesn't adopt a worldview of ironic detachment just because it makes the main characters seem cool. The Last Boy Scout is about getting away from that worldview and back to one that's far more square and sincere. The fact that Joe Hallenback used to be a do-gooder who took a bullet for Jimmy Carter is important. The fact he once idolized Jimmy is even more important, since the movie sets up a universe in which no one's faith is restored in politics, but the restoration of faith in heroism and of redemption are a reality. The government is broken, but a quarterback can be great again. For all its hardheartedness, the film sincerely believes in the possibility of heroes.

Action movies are only as good as their villains (I don't actually believe this completely, but it's true enough that I'd like you go with me here). That's why the best ones have great villains: Hans Gruber in Die Hard, the T-1000 in Terminator 2, Howard Payne in Speed, the English language in Commando. The Last Boy Scout has no shortage of great villains, from Chelcie Ross's douchebag senator to Noble Willingham's slimy, good-ol'-boy team owner. But the movie's masterstroke is in the casting of Taylor Negron as Milo, the sneering, evil, slightly effeminate henchman. Negron was a former stand-up comic who worked as a character actor throughout the '80s (he's most famous for playing the guy who delivers a pizza to Mr. Hand's class in Fast Times at Ridgemont High), and making him the villain of an action movie was a bold move that paid off. He's great (and SPOILERS AGAIN gets one of the best villain deaths of all time), and it's strange that he never got another role as high profile as this one. He should have become one of the go-to bad guys in the '90s, and it just didn't happen. It just makes The Last Boy Scout that much more special.

There's plenty of stuff that's bad in the movie, the way there is in so many action movies of the era. For as great as much of the dialogue is, a lot of it is only about half as funny as it seems to think. The constant joking can grow tiresome, and might even step on some of the action if Tony Scott wasn't directing the shit out of the movie. There are bad setups, like Hallenbeck's whole thing about dancing a jig, which is kind of dumb and sets up one of the movie's lamer sight gags. It's often hateful and shockingly misogynistic. As devoted action movie fans, we overlook this stuff because there is enough awesomeness on hand to overcome the things that don't work.

Supposedly, Damon Wayans wasn't very pleased with the movie and had little confidence in its chances of success. This is astounding, since it's the best movie he was ever associated with. This is a guy who went from trading brilliant, profane barbs with Bruce Fucking Willis to a decade of movies like 'Mo Money, Blankman, Celtic Pride and Major Payne. His only other real foray into the action genre came when he paired with Adam Sandler for the buddy comedy Bulletproof in 1996. What I'm saying is that maybe Damon Wayans is not the best judge of material, nor of his own work. Don't take his word for it on The Last Boy Scout. It's the shit.

*Yes, I know that neither Joe Hallenbeck nor Jimmy Dix is a cop, but that's just semantics. This movie is clearly of that genre.


Got an action movie you'd like to see highlighted in a future Heavy Action? Discuss in the comments below.
Posted by Patrick Bromley at 6:10 AM