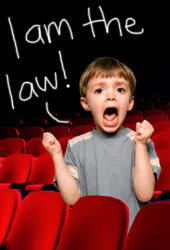 What are you guys doing in five weeks? #ScaryMovieMonth

This week, a new trailer for the upcoming reboot of Judge Dredd, titled Dredd 3D (now with three Ds!), was released, featuring Karl Urban snarling (in his best/worst anti-Stallone), "I am the law." Dude, there's only one Judge Dredd, and HE'S ALREADY THE LAW. Back to Bullet to the Head -- um, yeah ... AX FIGHT! Don't have too much else to say, except that Sly looks pretty good for 79.

Not totally sure what this one's about (I'm kidding). A high school reunion (still kidding)? Coming to terms with growing up (am I kidding?)? Lost love (yeah, I'm still kidding)? REGARDLESS, I like the cast, and this definitely feels like another fall movie (which is welcome, as I pointed out in last week's column highlighting Liberal Arts). However, director Jamie Linden's track record AIN'T THAT GREAT, so I guess we'll have to wait and see (which is probably my new tagline). "We'll have to wait and see!" -Doug, to no one in particular.

You only need to look at the poster for Stolen to know that YOU WILL TOTALLY BE IN THE FRONT ROW OF YOUR RESPECTIVE THEATER WITH YOUR BEST FRIEND AND A TUB OF POPCORN AND MAYBE SOME TWIZZLERS BUT PROBABLY JUNIOR MINTS ON OPENING DAY. Seriously, though, WTH? Can any Simon West fans out there defend this? Or is this really just a case of check-cashing? Guess those Bahamian islands and haunted houses and octopuses and nine Rolls-Royce Phantoms and Tarbosaurus dinosaur skulls don't pay for themselves, eh Nic?

"There's always money in the Chiquita® Brands International banana stand," -Jeffrey Tambor's corporate character Bob Gibbons channeling George Bluth Sr. (obvi). Listen, this might be the craziest trailer I've ever featured on this website, but F ME if I'm not intrigued!

Well, this looks pretty F'ing serious. I'm getting a Hereafter vibe from this preview (because TSUNAMI [and also because I'm not very deep]), which, let's be honest, isn't the best vibe to get. Obviously, this is late fall/early winter Oscar bait, but right now it just feels like a drag. SPOILER: Naomi Watts' character (you know, THE MOM) dies, right? Now I know why Patrick doesn't leave his house.

No words. Aside from, "YES." Please help put this trailer into context! #dodougsjobforhim
Posted by Patrick Bromley at 5:55 AM