The Overlook: Kiss Me, Kate in 3D!

Would I like to see Ann Miller dance in my living room and throw pink scarves in my face?

I continue my July 3-D binge with a screening of Kiss Me, Kate from 1953, recently restored to its original 3-D glory courtesy of the modern miracle of Blu-ray disc. I am by nature a bitter curmudgeon who only ventures forth from the hole in which I live to ask people trying to cross my bridge the three riddles (and ask not about my riddles three, lest you the riddled be!) Because of my reclusiveness, I am continually amazed and impressed by a) the fact that the illusion of 3-D is so good on these recent Blu-rays and b) that the whole kit-n-kaboodle even works at all. I’m so naturally pessimistic, babies, that I expect everything related to home video to require extra steps, to break, and/or to be a crushing disappointment.

Yet so far for my 3-D experiment, I switch on the equipment, insert the disc, turn the glasses on, press play and—poof—an explosion that nearly levels my block! Just kidding; I am fine. But perhaps this ease of use has something to do with the fact that my AV system bears the name “Sony” and not “Comcast.” 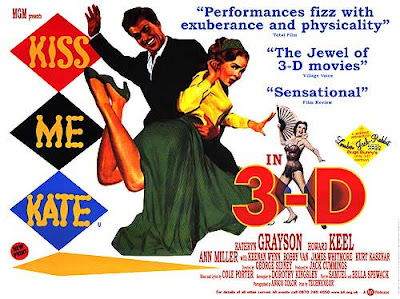 The 3-D effects on the new Kiss Me, Kate disc are excellent and fun. As I watched, I wondered if five decades’ worth of folks watching it flat on television all gradually figured out that the film was originally stereoscopic. Director George Sidney does a terrific job of both helming a big-budget Broadway adaptation and providing 3-D goofiness for every twelve year-old in the theater: scarves, mugs, dice, cards, water, streamers, and a live Italian donkey are all lobbed at the camera to metaphorically land in the audiences’ laps.

Well, perhaps not the last one, but that donkey certainly seems like he would have been up for it.

Along the way, what is happening onstage mirrors the characters’ real-life dramas, accompanied by some swell Cole Porter songs: “So In Love,” “Too Darn Hot,” “I Hate Men,” “Always True To You In My Fashion,” “Brush Up Your Shakespeare,” and “From This Moment On.” Oddly enough, the terrific song “Another Opening, Another Show,” featured in the Broadway version, is only heard as background music in the film. 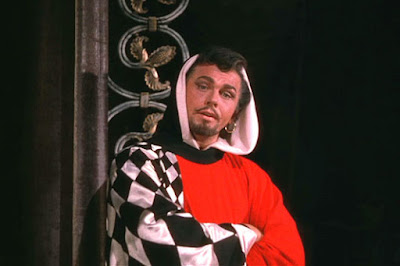 The performances here are all first rate. I have always felt that Howard Keel was at his best playing “over-sized” characters—like Adam, eldest of the Seven Brides For Seven Brothers—and his Fred Graham here is a hoot: egotistic, scheming, and yet still charming and attractive. (I shudder to think of what Singing In The Rain would have been like if MGM had gone ahead with Keel in the lead, as they originally planned) Kathryn Grayson is more than a match for Keel and, as my wife kept pointing out, managed to do it with all of her internal organs somehow crammed into what looks like a 12-inch waist. Ann Miller shines with a number that seems to have been written for her, “Too Darn Hot,” though it was actually performed in the Broadway version by Fred Graham’s black valet, (a character changed to a non-singing white butler in the film.) Tommy Rall, Bobby Van, and a young Bob Fosse are all excellent as Bianca’s suitors Tranio, Gremio, and Hortensio; in the show-within-a-show’s final production number, “From This Moment On,” Fosse really shines.

Though his dance piece with Carol Haney is a little over a minute long, the story goes that Fosse himself, not film choreographer Hermes Pan, created this dance. Fosse—who would later carve a career as one of the greatest choreographers in Broadway history—treats us to a career précis here, demonstrating all of the signature moves for which he would one day be famous: the athleticism, the finger-snapping, the slinking then straightened limbs. It’s one of the highlights in a film filled with highlights. 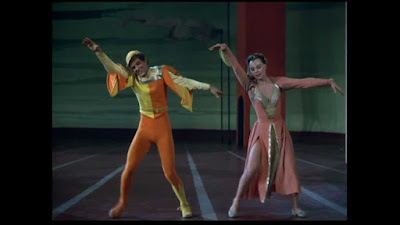 Modern audiences might have a problem with the latent misogyny of Kiss Me, Kate; even the movie poster features Howard Keel gleefully giving Kathryn Grayson a spanking. Though the film obviously comes from another time (when such things were still wrong but nevertheless more accepted) using Taming of the Shrew as source material makes it almost impossible to avoid. The play’s central conflict is that Baptista Minola has two daughters, the lovely Bianca and the shrewish Katherine; he vows not to allow Bianca to be wed until her older sister is similarly ensconced. Petruchio agrees to marry Katherine and gradually unfolds a plot to “break her” by beating her, starving her, and denying her sleep. He succeeds.

“Why! This is the stuff of classic comedy,” I hear no one saying. 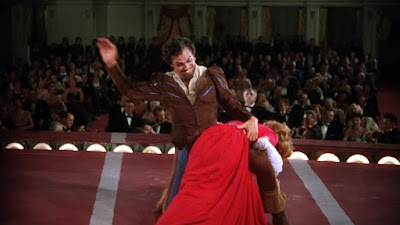 I have taught The Taming of the Shrew, I have seen many stage productions, and I was even in a high-school production. (No, I was not the title character.) Modern productions have attempted various spins on Shakespeare’s story: Petruchio and Katherine discover they are a perfect match and actually fall in love, Katherine offers up her ironic subservience as a gift to her husband, or the “ookier” elements of the farce are simply downplayed. However it is handled, we have a comedy here that is very, very problematic for modern audiences.

Actually, the movie has been toned down from the original Broadway production, and the Broadway show had been toned down from Shakespeare’s original salty dialogue. (In the movie, for instance, Fred Graham complains that Lilli calls him a “louse” in front of the rest of the cast; on Broadway, she called him a “bastard.”) For the movie, more than half of Wynn and Whitmore’s show-stopping “Brush Up Your Shakespeare,” hit the curb, deemed too risqué for 1953 movie audiences. A sample of the original Broadway version’s lines: “When your baby is pleading for pleasure, let her sample your Measure for Measure.” Oh, my stars! 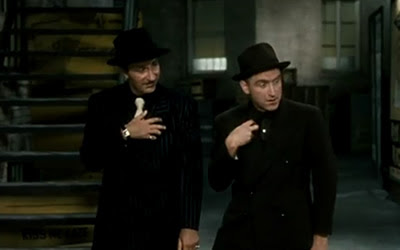 If one can negotiate the antiquated sexual politics of 1953 (Not to mention 1593!) there is an abundance of entertainment to be found on this disc: the wonderful score, the performances, the dancing, eye-popping color, and of course, Ann Miller dancing and dancing and throwing all kinds of shit in your face. The 3-D is just the icing on this cake—even if you’re not planning or able to watch it in 3-D, Kiss Me, Kate is highly recommended, my babies.