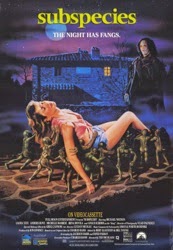 The first in one of the most popular Full Moon franchises is a different breed of vampire movie.

The original Subspecies, released in 1991 (making it one of the first titles put out by Full Moon Features) is unusually "adult" for a Full Moon movie, which are often characterized by a sense of humor, a willingness to embrace camp and/or a killer bong. Director Ted Nicolaou, a longtime company man who would go on to make all four films in the series, clearly tried to make a straightforward vampire film with Subspecies. There's nothing cheeky or silly about it.

Well, some of it is a little silly, like Angus "Tall Man" Scrimm (Phantasm) who cameos in the worst wig you've ever seen in a movie or the little tiny creatures (I believe they are the "subspecies") created via cool stop motion puppetry by the late Dave Allen. It's the little touches like this that keep a lot of the early Full Moon movies interesting; even when they're fairly traditional genre movies at the center, there's enough funky stuff happening on the edges to make it memorable. Subspecies is a movie that could use a little more of the funky stuff, seeing as how there are long stretches during which it feels like nothing is happening, but it always has one secret weapon up its sleeve: Danish actor Anders Hove as Radu, the vampire who would become the face of the franchise. 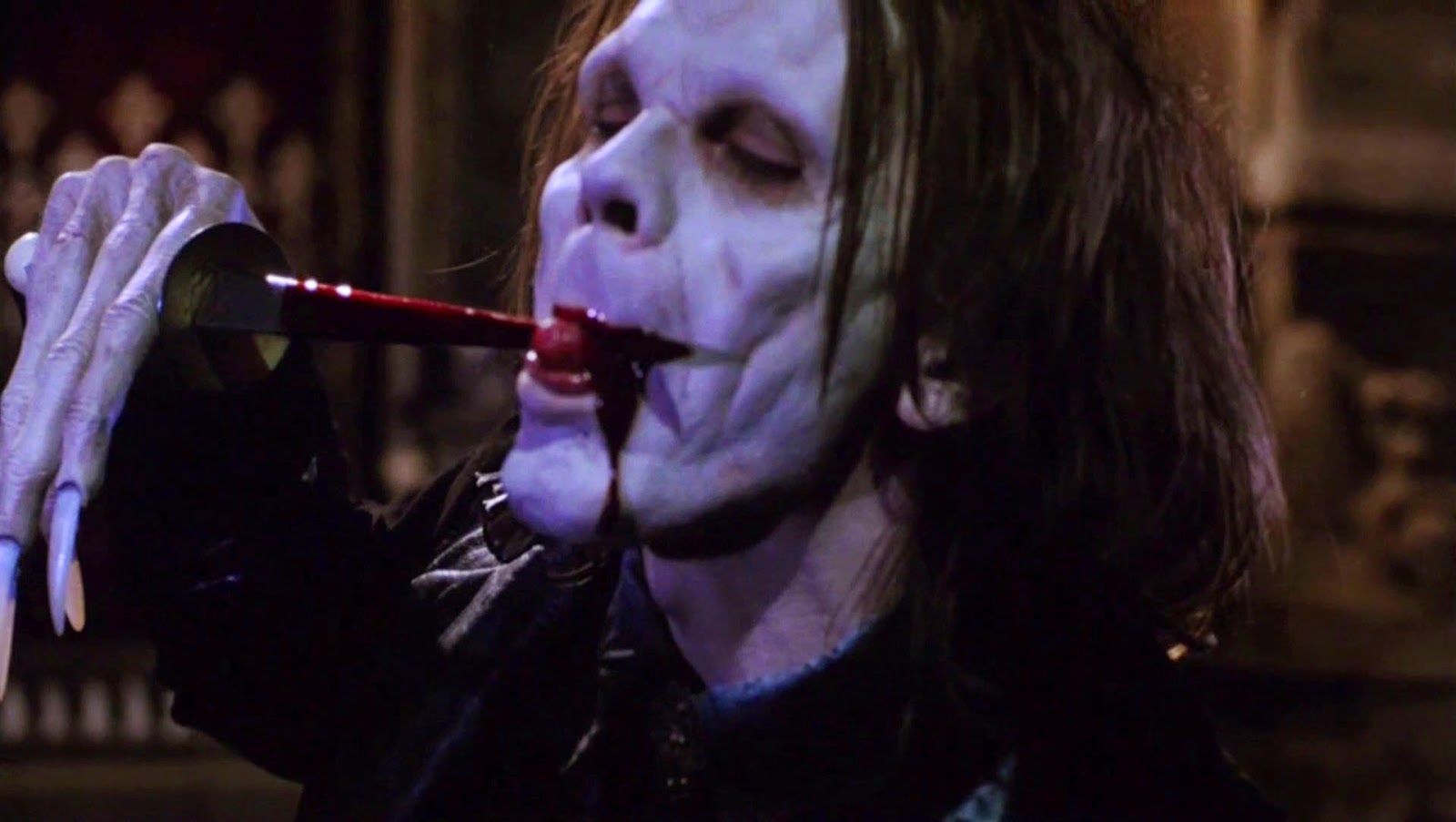 Three college students, Mara, Lilian and Michelle (Laura Tate) travel to the small East European village of Prejmer to study Romanian superstitions. There they encounter Stefan (Michael Watson), who claims to be a student studying animals and also happens to be very mysterious and dreamy. That's because he's a vampire, the brother of Radu (Hove), a long-haired, long-fingered, monstrous bloodsucker who murdered his own father to gain control of the Bloodstone, some sort of super important relic with super important vampire power (I think). Stefan and Radu continue to play out their centuries-old battle while Michelle and her friends get caught in the middle.

Subspecies appeared for horror fans right between the vampire renaissance of the late '80s (when The Lost Boys and Near Dark hit) and the one that would hit just a few years later in the mid-'90s with stuff like Bram Stoker's Dracula and Interview with the Vampire. The first wave was characterized by vampires who were sexy and "cool," right out of an MTV video. The second presented the vampire as the tortured romantic -- what Anne Rice hath wrought. But Subspecies fills a weird little void between the two, coming at a time when the monsters weren't trendy and making them neither sexy nor romantic. 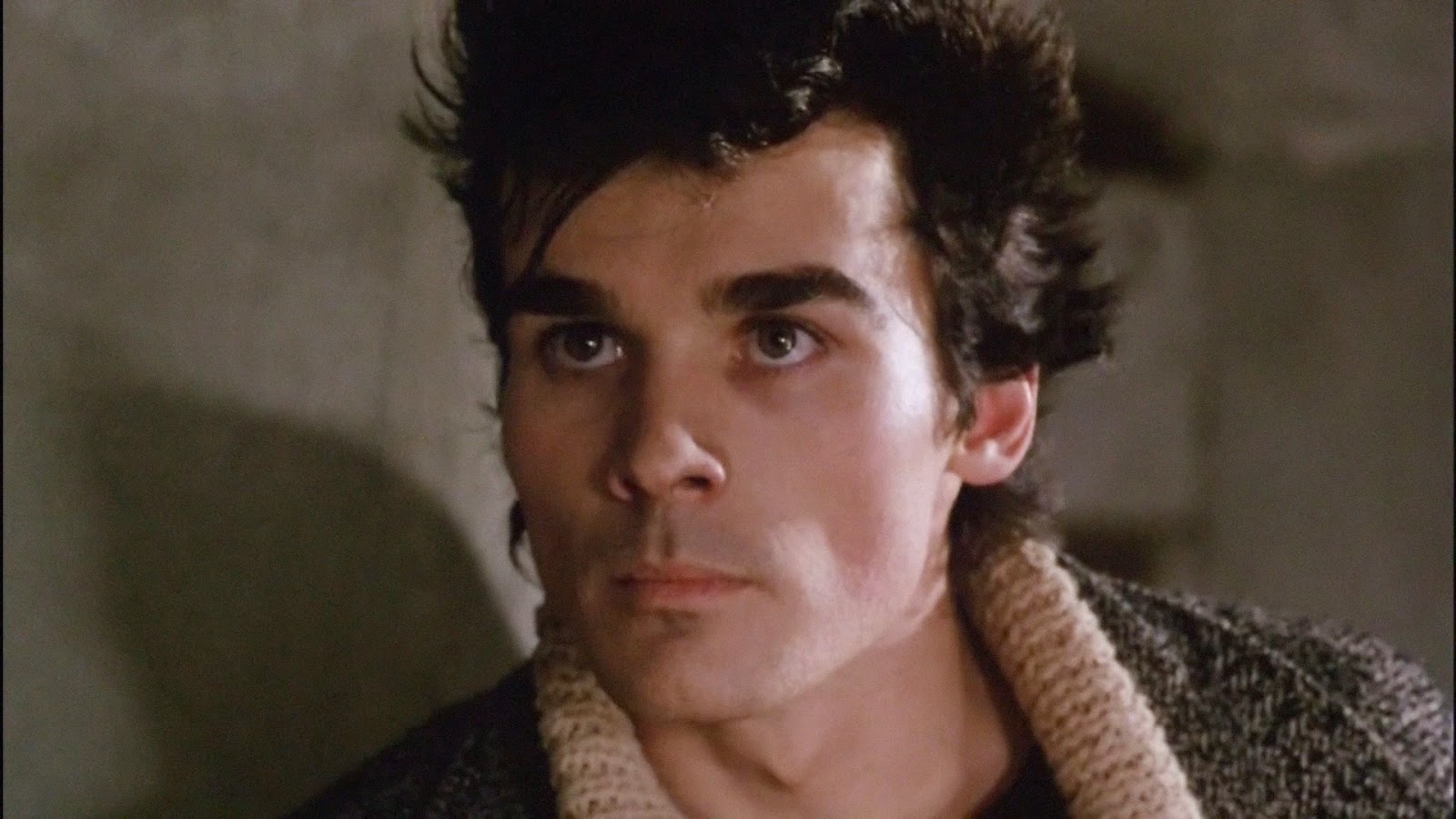 That's not entirely true. It does present one romantic vampire in Michael Watson's Stefan, the "normal" brother of the much more compelling Radu. What's intended to be the center of the film is the love story between Stefan and Michelle but is hijacked by Radu, who is a far more interesting character and performance than anyone else in the movie. Stefan is boring, and one of the reasons Subspecies 2 is even better than the original is because (SPOILERS) it has the sense to kill him in the first five minutes (it also recasts Laura Tate, who apparently opted not to return, with Denice Duff, an actress I like much better in the part; she would continue the role through the remainder of the series). While most vampire series would focus heavily on Mr. Handsome Bloodsucker -- just look at the phenomenon Twilight would eventually become -- the Subspecies series can't help but openly back Radu. That's one of the things I like about Full Moon movies: you can tell their makers ultimately side with the monsters. Give them enough time and they'll eventually become the heroes of their own series.

But Subspecies does have a romanticism to it that goes beyond the "I have crossed oceans of time to find you" and "I love you too much to condemn you" and "I don't like sand" of Bram Stoker's Dracula. In this case, the romanticism is in the making: this was the first American film ever shot completely in Bucharest, Romania, where Charles Band built an entire studio at which many of the Full Moon films were shot in the '90s and 2000s (it replaced the Italian castle where he shot many of his Empire Pictures productions). That may seem like just a piece of trivia, but it matters -- it gives the Subspecies series a different vibe and authenticity than the hundreds of other vampire movies with which it is competing. Gone is the feel of studio backlots and extras out of central casting. There is an authenticity to the movie that transcends its low budget roots.

What the film really has going for it is the performance of Anders Hove. While he was apparently a handful during production (maybe taking a page from Klaus Kinski, but actually I think he was just enjoying too many spirits), Hove creates a vampire that is ugly and animalistic, drawing inspiration from Max Schreck, Steven Tyler and a some kind of rodent. Instead of being cool or dreamy like most vampires of the time, Radu is an ugly, hateful monster. That would change over the course of the series, but one of the things I like best about Subspecies (even though the original is not my favorite film in the franchise) is that Radu is the villain through and through. He's one of my favorite movie vampires of all time. 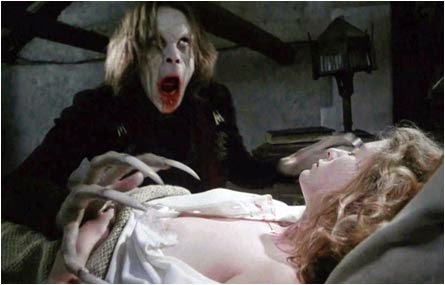 Director Ted Nicolaou has a long history with Charles Band, starting as an editor in the Empire Pictures days (he cut movies like Tourist Trap, Trancers, Ghoulies and Robot Jox) before graduating to director for the Full Moon era (era). This is only his second feature after his debut film TerrorVision and the two movies are very, very different. TerrorVision is all high-energy camp, broad satire and gross-out fun. Subspecies is much more serious-minded, steeped in the Gothic traditions of the vampire genre but pulling in a bit of B-movie eccentricity. Though Nicolaou would improve as the series continued (Subspecies II, in particular, is a beautifully made movie), he brings way more style and artistry to the film than the standards of DTV horror dictate. It's in the way he photographs Radu in shadows, or the way the Romanian countryside appears both at night and in the daytime -- this is the rare vampire movie with a number of exterior scenes shot in daylight, and they have the same dreamlike quality as the more obviously scary moments.

I have a bad habit of calling films like this "dreamlike" because it has striking imagery, repetitive music that eventually becomes hypnotic and a loose narrative -- it's less interested in telling a real story than in creating a mood. I talked about it in my piece on Tourist Trap. That's one of the powers of movies: we can fill in narrative gaps or overlook pacing problems if a film is able to cast a spell. In its best moments, Subspecies casts a spell. The score helps; while I'm sure there are plenty of people who would find it cheesy, I found the synth score by Richard Kosinski and Stuart Brotman effective. But I'm partial to this kind of stuff, which is why I write a column on these Full Moon movies in the first place.

Unfortunately, Subspecies is pretty dull whenever Radu isn't on screen. Stefan and Michelle give lifeless performances and generate no chemistry together. Stefan is such a drip, in fact, that we can't help but root for Radu. The guy just seems to want it more. There are long stretches of dialogue that aren't the movie's strong suit. And while both of Michelle's friends are very pretty, they aren't given much to do except eventually be vampirized and, of course, sexualized (I can do without seeing women naked and chained to a wall, especially because I like to revisit this movie outside the context of #Junesploitation). No one but Anders Hove manages to create a character at all, especially not one worth caring about. I tend to overlook the dry spots, though, and remember all the stuff I dig. Like the sword fight between Stefan and Radu. Stefan and Michelle's last scene together. The final shot of the film. The little subspecies guys, who are created by Radu chopping off the tips of his own fingers (and who need to be in the movie more, but I'm sure were prohibitively expensive). Anders Hove's performance. Nicolaou's stylish direction. It's clear that the budget for the movie is low, but the real sense of place compensates for any shortcomings. Besides, I don't mind things like obvious matte lines or blatant projection/composite shots. With a movie like this, I enjoy seeing the seams. It's just a different kind of movie magic.

There are so many goddamn vampire movies that follow the exact same beats and feel the same that, flawed as it may be, we have to be able to appreciate one that's very much its own thing. Subspecies is different enough both from other vampire movies and from the rest of Full Moon's catalog to warrant a look -- especially so that you can continue on and watch Bloodstone.

Subspecies is available for viewing on Full Moon Streaming, but it's the first of my Full Moon Fever titles that I didn't watch that way. This one I watched on Blu-ray, as it's one of the few Full Moon titles released on the format. The disc is ok -- the transfer is only decent and there aren't as many bonus features as there are on discs for the sequels-- but at least it's presented (for the first time, I believe) in its proper 1.85:1 widescreen aspect ratio. Most of the Full Moon titles both on FMS and on DVD are transferred full frame, which doesn't do justice to films that are actually concerned with visuals the way the Subspecies movies are.

Buy Subspecies on Blu-ray or DVD through the links below and support F This Movie!

Posted by Patrick Bromley at 12:01 PM