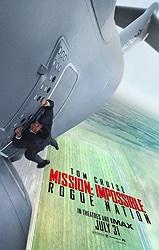 This mission just got a hell of a lot more impossibler.

I have a strong suspicion that many of the reviews for Mission: Impossible: Rogue Nation, the fifth movie in Tom Cruise's nearly 20-year old action franchise, will begin by pointing out some variation on the fact that five movies and two decades in, the M:I series shows "no signs of slowing down." I would love to goof on this for being hacky and unoriginal if it weren't completely accurate. These movies seem to only get better the longer the series goes, and Rouge Nation cements the Mission: Impossible films as the best action franchise of all time.

Aside from the returning cast members -- this one brings back Cruise as Ethan Hunt, Ving Rhames, Jeremy Renner and Simon Pegg -- there's not much continuity that connects these movies, meaning they basically stand alone. You don't need to have seen the first four films to enjoy this one (though there are some mentions in the dialogue to the events of Ghost Protocol), which finds Alec Baldwin's CIA director demanding that the Impossible Mission Force (IMF) be disbanded and Ethan Hunt brought in to answer for his actions. Unfortunately, Ethan is detained as he hops the globe trying to prove the existence of The Syndicate, a collection of disavowed and declared-dead former secret agents working for the terrorist Lane (Sean Harris, appropriately despicable). Joining Ethan and the now-rogue IMF is Ilsa Faust (Rebecca Ferguson), a British agent whose motives and loyalties seem to be constantly changing. 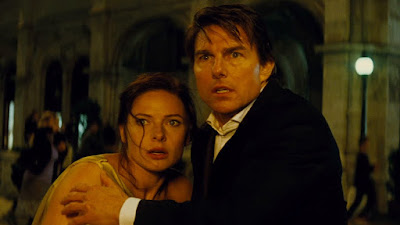 Attempting to describe the plot of a Mission: Impossible movie is almost entirely pointless, as they are all about the journey and not the destination. Like the Bond series, they are only distinguished by their villains, who tend to be interchangeable bad guys bent on doing bad shit to the world. We don't watch these films for their stories; we watch them to see what will go wrong and how the team will fix it before the clock runs out. At this, Rogue Nation is exceptionally good -- it is a movie constructed of one great set piece after another, directed with incredible confidence by Christopher McQuarrie, who also wrote the script.

A quick aside about McQuarrie, who is yet another in a long line of talented filmmakers chosen by Cruise and given a big opportunity to helm a huge movie without sacrificing what makes him special (when not already working with established geniuses, this is something that Cruise has been doing his entire career, Tom Cruise haters). McQuarrie crushes it. Did anyone see this coming? The Oscar-winning screenwriter of The Usual Suspects didn't direct a movie until Way of the Gun in 2000, and while I LOVE Way of the Gun, I love it specifically for its rough edges and rawness. There is very little in that movie to suggest he would be so good at handling a massive, slick commercial action movie. He didn't direct again until Jack Reacher in 2012 -- the movie that first paired him with Cruise -- and while I think that's also a terrific and more commercial blockbuster kind of movie, it's almost entirely about character and dialogue and plot. Seeing the confidence and ease with which McQuarrie directs the action sequences in Rogue Nation really blew me away. I just didn't know he had it in him.

It's those sequences that make Rogue Nation not just one of the best films in the Mission: Impossible franchise (it's tough to top Ghost Protocol, but this one might...I'll need to see it a few more times before I can decide), but also the most purely entertaining movie of this very crowded summer. While each new set piece is essentially about piling on new challenges for the heroes, each one manages to feel different and thrilling in its own way. McQuarrie is so canny about the way he shapes Rogue Nation, recognizing that it would be almost impossible to top the Burj Khalifa sequence in Ghost Protes and thereby opening the film with its most outrageous stunt in which Tom Cruise hangs from the side of a plane as it takes off (it's the one featured in all the advertising and even on the poster seen above). One might think, then, that the movie could only go downhill from there. One would be wrong. There's an incredible motorcycle chase, an underwater sequence shot in a series of long takes and an extended set piece at the opera that's a brilliant example of purely visual storytelling, taking place almost entirely without dialogue. It made me think that this is what a 2015 blockbuster might look like if it was directed by Alfred Hitchcock. 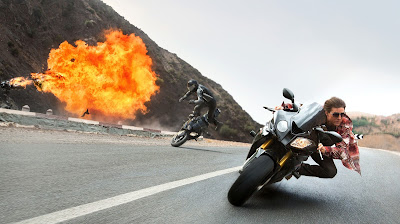 Throughout all of these scenes, the movie's greatest special effect is Tom Cruise himself, who, at 53, remains arguably the best movie star working today. His commitment to every single shot of Rogue Nation -- and through all of the Mission: Impossible films -- is a big part of what separates the movie from every other action movie around. When Ethan Hunt has to hold his breath underwater for minutes at a time, McQuarrie makes sure to shoot long takes so we can see it's really Cruise doing it. When Ethan Hunt is in a high speed motorcycle chase that requires tilting his bike to a 45 degree angle in order to maneuver past obstacles without slowing down, McQuarrie makes sure to get Tom Cruise's face in the shot so we know it's really him doing the driving. At this point there's not much more to the Ethan Hunt character than his refusal to quit and his dogged determination to save the day (or, in more recent installments, the people he cares about). That's ok. Cruise is so intense and physical and playful in the role that it's impossible not to have fun watching him work.

And because McQuarrie and Cruise have history together (going back to the WWII thriller Valkyrie, which McQuarrie wrote), the writer/director is incredibly clever about making this the movie that is at once the Tom Cruise-iest movie ever made while at the same time playing with the star's persona. Like last year's excellent Edge of Tomorrow, which worked as both a thrilling sci-fi action movie and as a meta-narrative about the origins of Tom Cruise's awesomeness, Rogue Nation is a Tom Cruise blockbuster that's also about being a Tom Cruise blockbuster. The very first shot we see of Cruise in the movie is of him running, something that he's famous for doing in every one of his films. Then he hangs on the side of a plane, outdoing himself in the stunt department. There are jokes about his height and jokes that take the piss out of his abilities (there is a section of the film in which he loses his "powers" like Superman in Superman II). At one point, another character asks "Do you really do all those things they say you do?" to which Cruise responds with just a look. As my astute wife (the biggest Tom Cruise fan on the planet) observed, this dialogue doesn't seem to be only in reference to stunts, but also to Cruise's personal life and religious affiliations. Yes, Rogue Nation is so good that it made me forget about Going Clear for two hours. 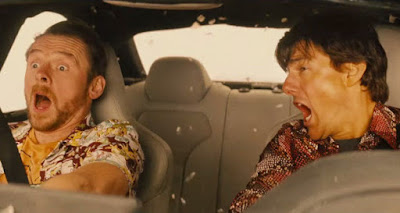 But I must also mention Rebecca Ferguson, who steals the film as British Intelligence agent Ilsa Faust (clearly an acknowledgement on the part of McQuarrie that Mission: Impossible has become the American Bond series). My only previous exposure to the actress was last year's underrated adaptation of Hercules directed by Brett Ratner, but Ferguson had little opportunity in that film to make any kind of impression. Not so here. From her first appearance, Ferguson holds the screen with a mix of intensity, athleticism and incredible sexiness. If she was a Bond girl, we'd be calling her one of our favorites. The costume designer who put her in her opera gown deserves a special award, as does the fight coordinator who decided she should perform her signature leaping leg lock move while wearing it (and McQuarrie is such a good screenwriter that he's able to make the move pay off in such a way that we don't even realize we were being set up the first few times we saw it). It's rare for Cruise to work opposite actresses of his celebrity status -- because there aren't many -- meaning he often makes some left-field choices in the leading ladies with whom he works. And yet what's rarely acknowledged about him is his willingness to star opposite women who are every bit his equal on screen. From Paula Patton in Ghost Protes to Emily Blunt in EoT to now Ferguson, Cruise's leading ladies are just as strong, competent and driven as he is. These are not damsels in distress in need of rescuing. These are characters -- and, by extension, actresses -- who could easily hold their own action films. Hopefully someone smart gives one to Rebecca Ferguson soon. 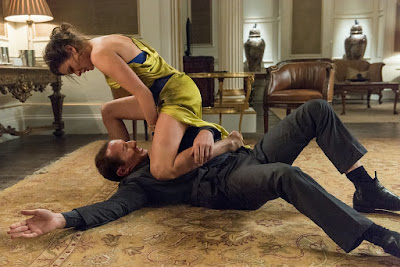 I think I had more fun during Rogue Nation than in any other movie this year. It's another smart, expertly executed action film in a series full of them (not you, M:I 2, even if I don't dislike you as much as most people). It has such energy and wit -- it's a funny movie, and not in the usual stupid "comic relief" way -- and shows us things we've never seen in a movie before. Like this summer's Ant-Man, it's a movie that's less about saving the world (though that's part of it) than it is about saving the people we care about. There is nothing bleak or moody, gritty or mean-spirited about it. As pop entertainment goes, it doesn't get much better. Tom Cruise has already suggested that Mission: Impossible 6 could be shooting as soon as next summer. With the path the series is going on and with this kind of quality control, that can't come soon enough. I love these movies.
Posted by Patrick Bromley at 5:00 AM