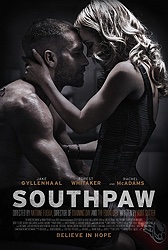 I like almost every boxing movie. With that being said, Southpaw is good…ish. It’s definitely on autopilot, but entertaining despite that and overall a somber and energetic experience – a tricky combination to pull off. I would place it on the mid-to-lower end of the pantheon of movies made about this very cinematic sport, behind the Rocky series, Raging Bull, The Fighter, Million Dollar Baby and Cinderella Man. It’s better than Ali (which is the most disappointing movie ever made – no hyperbole), The Hurricane, Grudge Match and Annapolis. Southpaw is a bit of a disappointment but there are still many things to appreciate about it and it’s just involving enough to give it a pass. But man, this could have been a great boxing movie under different circumstances. Some of the elements are there, namely a terrific cast. It just needs a different script and maybe a different director.

Southpaw tells the story of champion boxer Billy Hope (Jake Gyllenhaal) who turns to trainer Tick Willis (Forest Whitaker) to help him get his life back on track following a personal tragedy. I will not say more because if you haven’t seen the trailers for Southpaw, don’t watch the trailers for Southpaw. It spoils a huge plot development which, while the inciting incident to the rest of the story, is a scene that is emotionally blunted because we are aware already of what’s going to happen. Movie marketers are such assholes. This giveaway in the film’s trailer is way worse, in my opinion, then the one in Terminator Genisys. 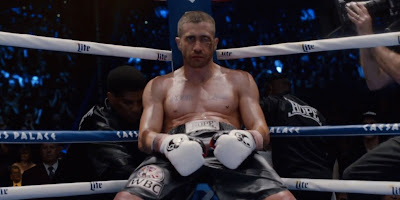 One element I found interesting about Southpaw is that this movie is really a story about how an incubated athlete has to think and do for himself for the first time outside of the ring. It’s really a movie about responsibility for oneself more than anything else and that’s an intriguing path to take, even though other boxing movies have also treaded similar ground. Outside of that, this is really just a traditional boxing movie about an athlete’s return to form after hitting rock bottom. You can anticipate each and every beat. It feels influenced by every boxing movie ever made, bringing nothing new to the table really. But as an underdog sports drama, it’s as rousing as it intends to be.

Southpaw remains an interesting movie for me because it has the good sense to glide on the power of its actors. The cast is very strong for this type of movie, led by Jake Gyllenhaal as Billy Hope. The character is only average (he’s reactive and his problems are based mostly on plot contrivances instead of issues that grow out of his character traits) but Gyllenhaal is such a powerhouse physical and emotional actor that the performance is always riveting. However, this is a role that could have been played by a lot of people (in fact, Southpaw was originally intended as a vehicle for Eminem), so it’s a little disappointing to see an actor as good as Gyllenhaal encumbered by having to play someone so under his own intelligence and creativity as a performer. I got a sense that the script is not fully utilizing this actor’s talents, which is a shame. 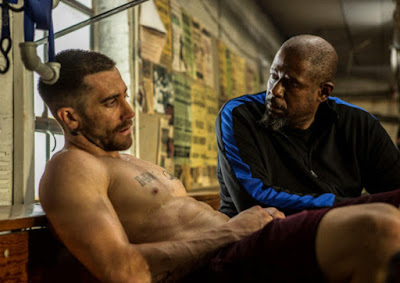 Forest Whitaker (an actor who improves every movie by being in it and always creates someone who feels like they’ve been living a life before the movie began) and Oona Laurence (as Billy Hope’s young daughter) give good, honest and invested performances despite their actions almost always seeming to be guided by the necessities of the plot. There’s one scene, though, that I love that involved Gyllenhaal and Laurence. It takes place in his new apartment (the character’s house has since gone in foreclosure) and father and daughter have a really blunt but warm and loving conversation about the dynamic of their relationship. It’s succinct and sad and one of the few examples of great writing in an otherwise problematic script.

The MVP of the movie for me was Rachel McAdams, even though she’s in the movie for maybe only 30 minutes. I wanted more of her in Southpaw, as it would have made it a better movie. It’s a performance that made me remember how sexy, playful and in-control the actress can be with the right material. In fact, I would go as far as to say that Southpaw should be her movie instead of Billy Hope’s. Billy is reactive, where McAdams’ Maureen is more pro-active. It would have changed the trajectory of the movie completely but would have been an interesting spin on the Rocky-Adrian relationship -- it would be an in-charge, not-shy Adrian taking care of her Rocky in the fight game and in life. McAdams and Gyllenhaal have great chemistry in their scenes together and those are the ones that work best in Southpaw. 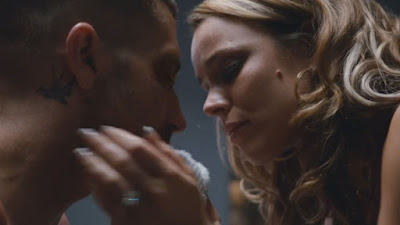 I also will say that the fight sequences are impressively handled. They’re flashy in the right ways and shot with a lot of confidence and purpose. This is where director Antoine Fuqua shines – in the action more than in the drama. These scenes never feel like you’re watching actors. It feels like real fights with actual fighters. It’s visceral and employs just enough style and use of technique to keep the fights both dynamic and easy to follow. Plus, Fuqua nails the training montage sequence, which is always key in any boxing movie. If you blow that scene, the movie will crash under its own weight. Southpaw’s training montage got me amped up. Fuqua also makes an interesting choice in the middle section of the movie by having the movie play as if it’s almost inebriated, which makes sense for the Hope character’s current point of view. Altogether, this might be my favorite Antoine Fuqua movie since Training Day.

Despite me being very aware of its imperfections as its going (I often felt the director and screenwriter Kurt Sutter trying to play my emotions and the movie is very predictable), Southpaw is the type of movie I could very easily see myself watching a bunch of times on cable. It’s comforting junk food for a boxing movie fan. It’s well-paced and carries itself on the most important special effect a movie can employ – great acting. I also love the movie’s closing shot. When you walk out of a movie on a high, it’s hard not to recommend it...even if just a little bit.
Posted by Patrick Bromley at 5:00 AM