Riske Business: Me & The Music Box: A 10 Year Odyssey

This is one of those pour-your-heart-out articles.

Thinking back, I owe Chicago's Music Box Theatre a whole bunch. I graduated from college in 2004 and it was a true time of transition for me. I was recently dumped by my then-girlfriend, jobless and back living at home with my parents. My world was turned upside down and I felt like shit all the time. I drank a lot and acted like an idiot with my other jobless friends to ease our post-graduate angst. I was in a daze that lasted for months until I started dating again, found a full-time job and eventually got my own apartment. Stability is important and I had none for a while. I knew nothing about the Music Box in 2004 but the seeds were planted and it was there waiting for me.

What do I mean by that? Well, back in my senior year of college I took a film course called Hollywood I and II. Hollywood I followed the beginning of film until 1950 and Hollywood II was the 1950s to the present. Every week I had two movies I had to watch as part of the syllabus for the course. It was the best homework I ever had to do: watch movies and write and talk about them. Once I graduated and was thrown into the real world, I stopped being a student of movies until I found the Music Box...but more on that later. 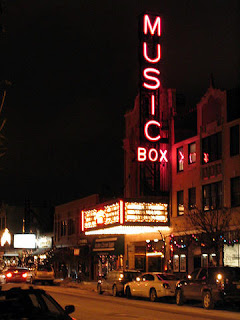 The first time I went to the Music Box was for a midnight screening of Raiders of the Lost Ark in June 2005. I went as a distraction more than anything. I had to see Raiders that night. One of my drinking buddies died the week before and I was coming back from his funeral (Rest in Peace, Bryce). I couldn’t close the night at home crying. I had to do something -- anything -- and at that point seeing a movie made the most sense. So I went with a friend to see Raiders after drinking for two hours and passed out in my theater seat before the movie began. Let’s say my first meeting with the Music Box was inauspicious. But I loved the theater from what I remembered about it, and knew I had to go back.

I did go back five months later to see 2001: A Space Odyssey. This time I was sober and I was by myself. The experience was overwhelming, wonderful and one of the most memorable theater experiences I’ve ever had for myriad reasons. It was my first time seeing 2001 in a theater (in 70mm!) and it was my first time in a “classic” theater where I could remember what was going on. Even though the sound cut out during the last five minutes of the movie (and 2001 is a movie where sound is really important), I was on cloud nine on my drive back home. I listened to the new Fiona Apple album (Extraordinary Machine) and thought about a lot of things, including the beautiful architecture of the theater and how great 70mm looked on my favorite movie. I felt joyful. At that point I became an addict for watching movies at the Music Box. 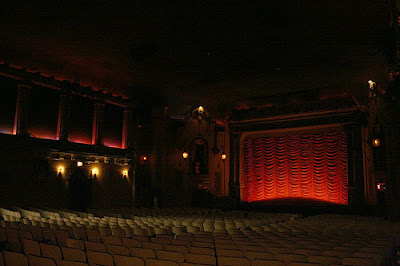 The Music Box shows an array of new independents, classics and cult midnight favorites, so over the next three years I saw many movies like Pulse (Kairo), Pink Floyd: The Wall, all three Indiana Jones movies, The Thing, Deathdream, The Seven Samurai, Lost Highway, The Room and a ton of others; lots of movies that have grown near and dear to me. So in 2008, I decided to create my own syllabuses to continue my film education and I used the calendar at the Music Box as my teacher. I was able to keep up with this form of self-imposed continuing education for years and learned to love the likes of Audrey Hepburn, Paul Newman and Alfred Hitchcock as a result. My life has been enriched by seeing their movies and I had the Music Box to thank for the guidance. I bring this up because I’m thinking of doing this again – i.e. creating my own movie syllabuses to follow. I’m starting to feel woefully behind on the classics.

But most importantly if it wasn’t for the Music Box, I would never be a part of (or even know about) F This Movie!. I discovered F This Movie! as a result of searching for “Like You Were There” type articles after attending one of the Music Box Massacres. I found an F This Movie! podcast on the event and immediately was hooked on the show. Over the years I became a fan of F This Movie!, friends with Patrick and the crew at the site and eventually a contributor. If F This Movie! wasn’t a part of my life it would be a bit gloomier. I’d even go as far to say I can’t imagine what my life would be like if F This Movie! never entered it. It’s a special place, a special community for which I am very grateful. I owe the discovery of F This Movie! to the Music Box. It’s just one thing that’s provided stability to my life. 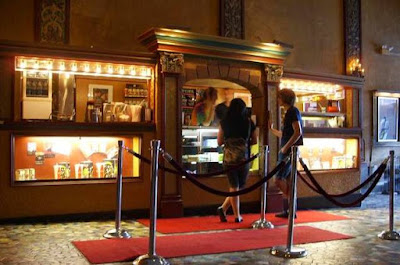 In closing, there’s a line in 40 Days and 40 Nights (yes, the great Josh Hartnett movie from 2002) that, when paraphrased, goes “You know how every guy has their special place? Well, the bus is that for Matt.” The Music Box is my bus. The past ten years have had their ups and their downs for me but whenever I felt sad in my life I always knew I could visit the Music Box Theatre in Chicago and feel much better. Here’s to the first ten years of us knowing each other. Cheers!
Posted by Patrick Bromley at 12:00 PM