The Overlook: The Hole in 3-D!

I cannot for the life of me understand why a Joe Dante horror film in 3-D would not merit a wide release.

Hey, have you seen The Hole? Probably not, because it was never properly released. I am here to tell you, fuck not seeing The Hole.

The Hole’s 3-D effects are delightful and plentiful: during the course of the film, the following objects are thrown at the audience: a baseball, nails, a plush doll of Cartman from South Park, a paint can, a fishing reel, a video camera, a doorknob, paintballs, two live rats, and a 1950s style desk lamp! So many contemporary 3-D films are post-conversions—technological after-thoughts by a studio interested in raking in the “glasses money”—that one would think both theatre owners and theatre goers would embrace a film actually photographed in 3-D.

One would be wrong. The film premiered in 2009 at the Toronto Film Festival and then at the Castro Theater in San Francisco; a few screenings followed in Los Angeles and Atlanta in 2010. Box Office Mojo, the website devoted to film grosses, doesn’t even list the film. 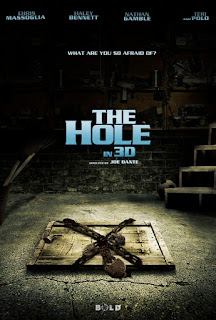 THE PLOT IN BRIEF: Single Mom Susan (Teri Polo) and her sons Dane (Chris Massoglia) and Lucas (Nathan Gamble) move into a new house. The boys quickly discover a large hole in the basement floor, secured by a heavy wooden door with six padlocks. Julie (Haley Bennett), the literal girl next door, soon joins them in exploring the hole and trying to figure out the strange effect it has on them.

SIDENOTE: Why do basements in movie houses always contain the previous owner’s shit? Why don’t our protagonists ever stipulate that the owners need to CLEAN the basement before the purchase goes through? I’m just sayin’… 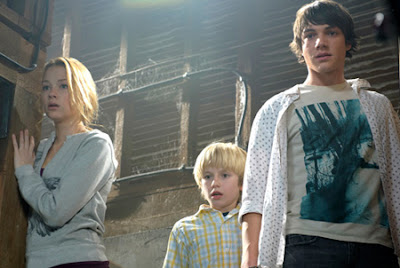 The Hole has a lot going for it. Joe Dante is clearly a master of the form and delights in getting to work in 3-D. He constantly foregrounds objects (a railing, a string of Christmas tree lights, a pile of junk) so that shots without a “pop-up gimmick” still display a wonderful sense of depth. Dante also uses the surround sound mix just as effectively in eliciting scares and expanding the virtual width and depth of the film frame. The Hole contains some great “red herring” scares and a few terrific “boo” moments.

Dane: Who the hell is that? Is she one of your little friends?
Lucas: I don’t have any friends.

Julie: You’ve got a gateway to hell under your house. And that’s really cool.

Susan: How’d the two of you feel about having the house to yourselves?
Lucas: Bad. 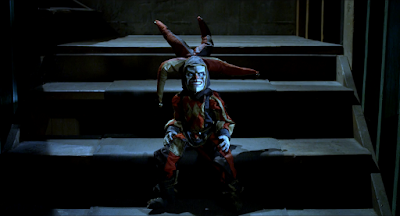 In the documentary Fear in the Dark, Wes Craven suggests that “everything that is hidden, degenerates,” and that is a major theme of The Hole. Our three protagonists discover that the hole is exploiting their secret fears—issues they have never faced or dealt with and so continue to haunt them. In this way, the film has a nice message to its intended pre-teen audience: you must face your fears, and often this involves getting help in order to deal with them.

Dante excels at portraying the uncanny, that elusive quality of things being not quite right. The film features several establishing shots of the house itself at twilight with eerie music on the soundtrack, and these shots summarize a major theme in Dante’s chaotic oeuvre—the terror and insanity that lies just beneath the surface of a tranquil, boring suburban existence. Indeed, many of Dante’s films go so far as to suggest that the dull patina of suburban life is a deliberate façade meant to deny the existence of an underlying terror or destructive force.

I found it fascinating that Dante employs the majority of the gee-whiz 3-D stuff in the film’s first half hour; once the plot really cranks into motion, the obvious physiological tricks fall away in favor of more compelling psychological scares.

Clowns are terrifying, amusement parks are (by design) terrifying, and the thought of Mom starting to date again? Absolutely terrifying. Yet what winds up being the scariest element in The Hole, to paraphrase R.H.W Dillard in his seminal essay on Night of the Living Dead, is the terror of the whole ordinary world itself. The Hole shares this theme with many contemporary horror films (I am thinking here of the recent It Follows and The Babadook) which ask their audiences to contemplate what our mundane reality might really be hiding. 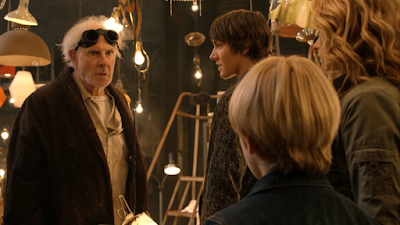 Bruce Dern shows up halfway through the film for a two-scene cameo that is one of the film’s highlights. His performance as “Creepy Carl” is so specific and haunted that it is a joy to watch. The production design of his “abandoned glove factory lair” (an infinite space crammed with every kind of lamp and bulb imaginable) is a visual feast that adds to what the film has to say about what we all consign to the darkness and what we are willing to expose to the light.

The Hole reminded me of the Are You Afraid of the Dark? and Goosebumps television programs my son used to enjoy in the late 1990s, and therein I feel we can see the source of the film’s distribution problems. In the final analysis, the film is too scary for preteens (the climax involves a brutal, truly disturbing revelation) and not quite scary enough for teenagers and adults. I felt about it the same way I felt about the relative poor box office performance of ParaNorman, a film I concluded was made for an audience of only me. 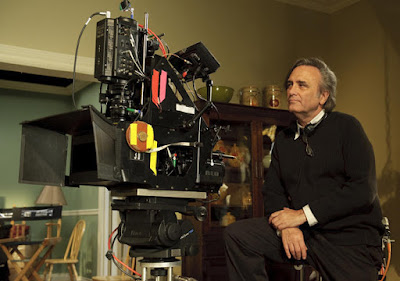 Babies, if you’re a horror fan, a Dante fan, or a hole enthusiast, you’ll find lots to like in this movie. The Hole is currently available on Netflix Instant Streaming, alas, shorn of its wonderful 3-D effects. I still heartily recommend it. Or shell out the cash for the Region B/2 German or Italian Blu-ray disc and a region free player! You’ll be glad you did!