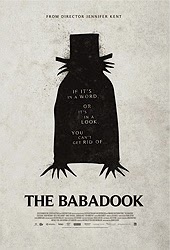 If it's in a word or it's in a look, you can't get rid of The Babadook.

The horror films that really rattle us are the ones that speak to us on some very personal level. The Exorcist is scary because we fear the people we love changing into something we no longer recognize, either as a result of sickness or some unknown reason. The Descent terrifies me not because I'm afraid of cave monsters (they're not so bad) but because I'm horribly claustrophobic and Neil Marshall fucking knows it.

Jennifer Kent's debut film The Babadook upset me in ways that few horror films have been able to manage because it speaks to all of my doubt and insecurities as a parent. Raising kids is tough, even when your kids are the best (my kids are the best). You're more exhausted than you ever thought possible. You can't get a second to yourself. You can't reason with this person or get them to think or act the way you want. It can be incredibly frustrating, but only half as frustrating as the way that you end up punishing yourself for feeling frustrated in the first place. We live in a time when every blogger and member of a Facebook parent group is Instagramming and humblebragging about their amazing kids and the amazing adventures they have and the amazing recipe they cooked for their amazing kid's amazing second birthday party. No one seems willing to admit that there are days when it's really hard.

The Babadook admits it. Even better, it translates those insecurities and frustrations into the language of a horror film, and a really good one at that. It is to parenting what The Shining is to alcoholism. 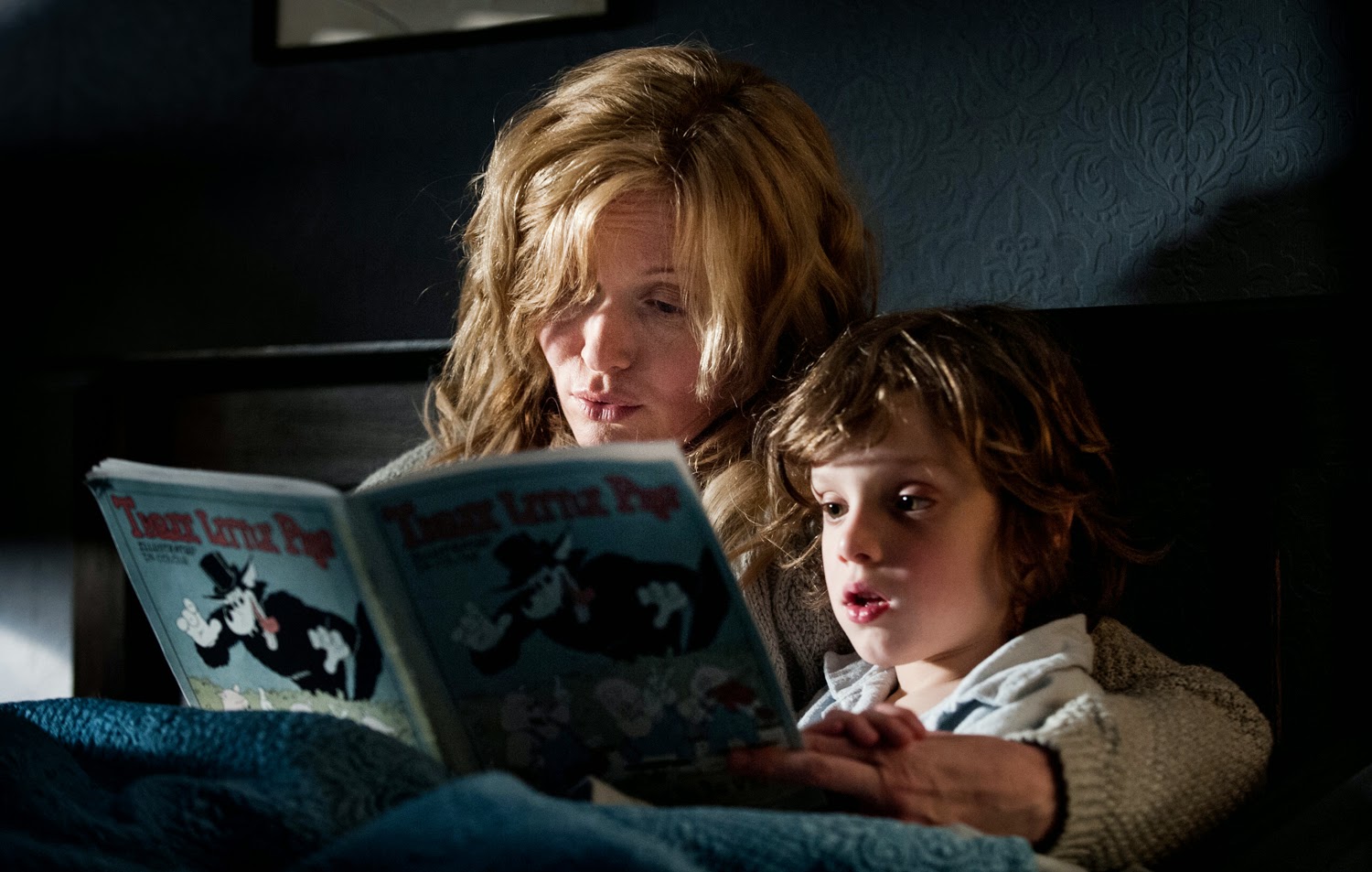 Amelia (Essie Davis) is a single mom raising her son Samuel (Noah Wiseman), a six-year old boy some might describe as "a handful" and who others would call "troubled." He's obsessed with monsters, always building weapons to fight off the ones he claims he sees and are coming to get him, and he's quick to tell even strangers that his father was killed in an accident on the day he was born. Amelia is clearly struggling on her own; she doesn't sleep enough and Samuel's obsessions and discipline issues are wearing her down very, very quickly -- not to mention the fact that she's still clearly haunted by the death of her husband.

One day, Samuel asks his mom to read a story from a book she's never seen before but is sitting on their shelf. It's a pop-up book called Mr. Babadook, which tells the story of a boogeyman who can't be ignored and will never go away once his existence is acknowledged. And just like that, Amelia begins to see things and hear things. Maybe Mr. Babadook isn't just a story after all. 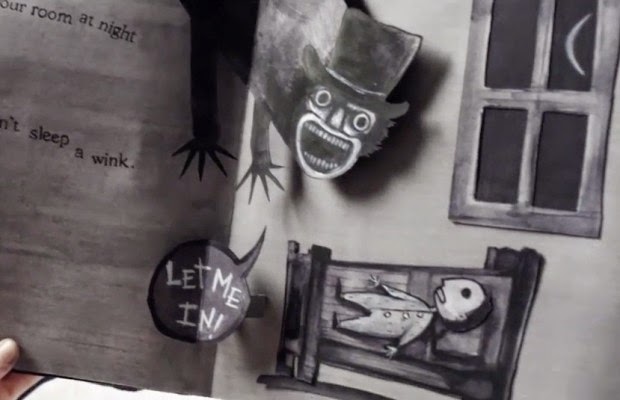 For the first two-thirds of its running time, The Babadook is the best horror movie of the year. It's moody and stylish in a quiet way, unsettling us with emotions and not necessarily suspense or visceral scares. But Kent does those well, too, and in the moments in which we get literal representations of Mr. Babadook, the movie is genuinely terrifying -- it's all shadow and sound and holy shit does it work. There is something totally nightmarish about the way that Kent builds the story, from the mundane things like the way Samuel keeps shouting "Mom! Mom! Mom!" to a pop-up book sequence that's one of the scariest things I've seen in a movie in a long time. This is one of the few horror films that made me feel like I might have a panic attack.

Alas, like with so much supernatural horror, The Babadook is unable to sustain the tension and mystery in its last act, settling for a finale that works thematically but not nearly as well dramatically. If one is willing to accept the entirety of the film as a metaphor (and a case could be made), the final half hour is likely to be more satisfying -- though it requires us to accept the characters as placeholders there to represent ideas instead of human beings in which we are to be invested. It doesn't make The Babadook a lesser movie, just a different one. It changes the movie's power. 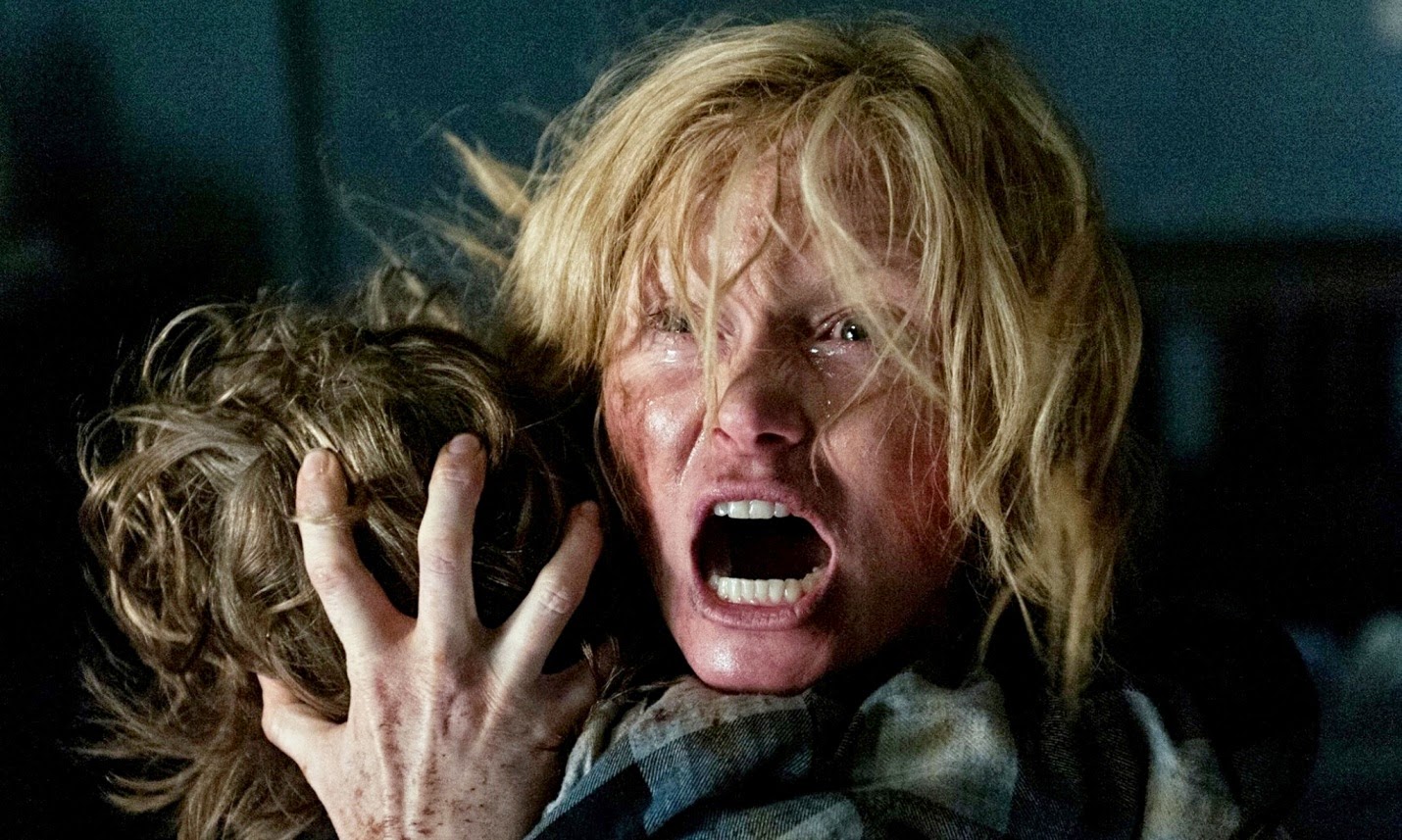 Elevating the movie even beyond Kent's sensitive and assured direction is Essie Davis' performance, which joins Alex Essoe's work in Starry Eyes as one of the best of the year in a genre film or otherwise. Amelia is doing her best to get by but it's clearly not working for her or her son, and Davis shows us every crack, every forced smile that's covering all of her fear and pain and frustration. She's incredible. And, again, there is an Act Three misstep that Davis does her best to sell, but she's really at her best when she's quietly falling apart, or finally losing her shit and then trying to make it up with the most heartbreaking bowl of ice cream you'll ever see someone eat.

There is so much that's great about The Babadook that it pains me to see the movie stumble near the end, and yet even those mistakes can't erase what writer/director Jennifer Kent (making her first feature) is able to accomplish. The film has greatness in it; the few scenes in which it really cuts loose with the scary are strong enough for the movie to catch on with audiences that might otherwise dismiss based on the title, while the main metaphor -- the level on which The Babadook really works -- carries a weight that speaks to the indie crowd. Like many great horror films, Jennifer Kent uses the genre to explore deeper issues that feel uncomfortably honest and real. It's the kind of movie that made me admire how much it was upsetting me.

The Babadook is currently playing in limited release and is available on VOD and iTunes.