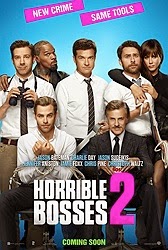 I say to the filmmakers….did you even try? Seriously, did you give this your best effort?

Most comedy sequels are just the worst. It’s just a chance for the key players from the original to earn a fat paycheck and pat themselves on the back. Quite frankly I’m sick of it. I’m really sick of it. First Dumb and Dumber To and now this piece of garbage Horrible Bosses 2. I mean don’t they have any sense of pride in putting together a good product? You work the same hours so why not make a good movie?

Jason Bateman is a talented guy. You’ve got Oscar winners (Jamie Foxx, Kevin Spacey, Christoph Waltz) all over this thing. Chris Pine is an engaging actor. I don’t like the other two guys (Jason Sudeikis and Charlie Day) all that much and they’re all stuck with this lousy script with sick humor and a generic story. It’s not funny and if you’re a comedy that fails to land a single laugh then what are you trying to even do? I got angry during this movie because it wasted my time and didn’t offer me anything of any resonance or value. There’s not one moment of truth in this movie. You would think over two movies (with the first one not being very good) that you could have something to say about working for a truly terrible boss -- you know, some universal truth -- but instead it’s all this bad sitcom stuff. For example, an opening scene that brings the audience up to speed with the main characters and takes place on a Good Morning style television show is embarrassing. 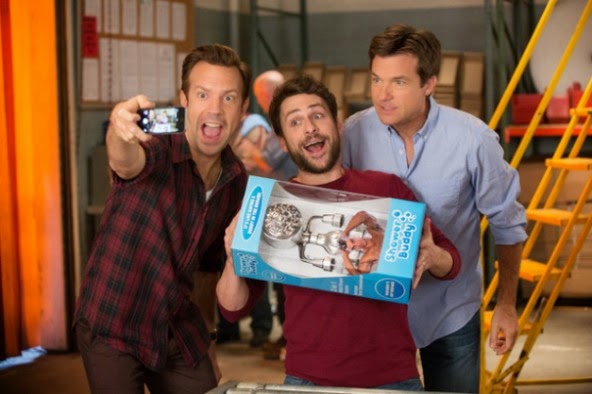 The plot in brief: Nick (Jason Bateman), Dale (Charlie Day) and Kurt (Jason Sudeikis) go into business for themselves selling a car wash-like shower accessory called the Shower Buddy. After striking a deal with a shady businessman (Christoph Waltz), the three find themselves at risk of losing their business unless they come up with some quick cash. Enter a kidnapping scheme involving the son of their rich betrayer (played by Chris Pine) who Nick, Kurt and Dale attempt to abduct and hold for ransom.

In terms of technical credits, there is nothing much noteworthy going on here. The style is pretty slack. Director Sean Anders (That’s My Boy, Sex Drive) does not have much visual flair or identity behind the camera. The musical score is especially generic so much so that it stands out which is never good. The performances all seem either cranked up way too high (in the case of Day) or bored (in the case of Waltz especially, whose talents are completely wasted by this movie). Chris Pine is game but is playing a variation of the character he played before in this year’s Stretch. Bateman is pretty good, but then he’s always good. He’s got rotten taste in material as of late, but he is never the problem. The reappearance of the characters played by Jamie Foxx and Kevin Spacey fail to leave much of an impact. 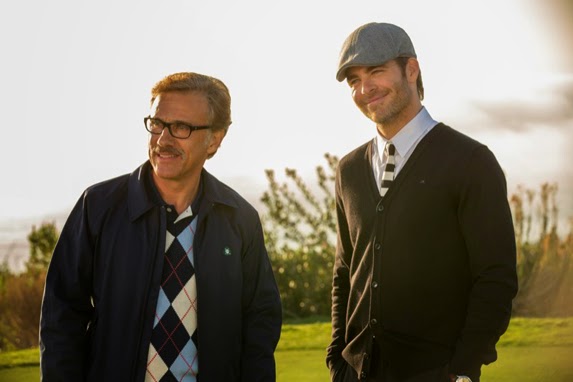 A real problem I had with the movie is the Jennifer Aniston character, or should I say caricature, who is trotted out to say dirty words as if we’re all 14 and the fact that she’s a slut is hilarious. Making sex funny is not easy to do in a movie, and in Horrible Bosses 2 it seems to not have any idea what it’s trying to do. Is she supposed to be titillating? Are we supposed to laugh at her? Or even worse at the men she’s trying to rape? And how about that scene where Aniston and Bateman are at a sex addiction meeting and she makes him graphically describe two young boys performing sex acts on each other. What were they thinking? It’s so distasteful. The best outcome is a cheap laugh (at least that was the intent) but don’t you have to be sort of morally corrupt to find that funny? And I haven’t even mentioned the racist humor that’s in the movie as well. There one scene I remember where one character says something terribly racist and another character calls him out on it as if that were enough for the filmmakers to excuse themselves or somehow remove their responsibility for positing that vile. After all, these are written characters. They’re not real people. They are the creator’s responsibility. The movie constantly misunderstands that offensive does not equate to edgy.

The thing I can’t wrap my head around with the Horrible Bosses movies is that these three guys are not victims. They’re kind of bad people (at least they do bad things) and the movie doesn’t even have the guts to punish them for that. They all get happily-ever-after endings that are absurd. I’m not saying be moralistic. I’m saying be realistic. You have an R-rated comedy; do you think the audience can’t handle laughing at these guys go to jail or something? This is material for a very dark comedy, but the movie wants to be likeable and you can’t have it both ways with material like kidnapping. Do yourself a favor: if you run into someone and you’re talking about film and they mention they like Horrible Bosses 2, run…run for your life because you are talking with someone who is not evolved enough to talk to you about good movies. A movie like Horrible Bosses 2 that aspires just to be great trash or purely entertaining and can’t even do that is not worth much of anything. It’s just lazy, stupid, mindless and dreadful. 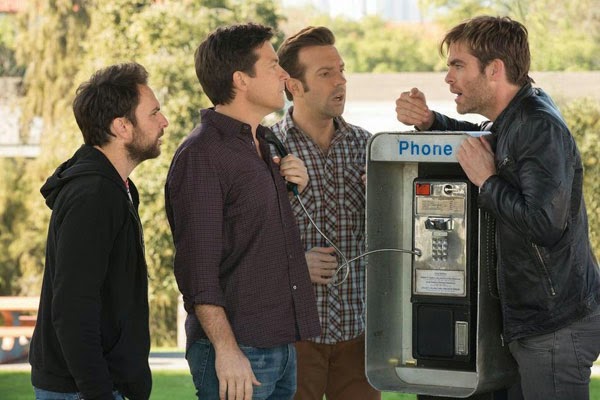 I’ll close with this. As I walked out of the theater showing Horrible Bosses 2, a teenage usher (who couldn’t have been more than 16 years old) asked me how the movie was. I sort of sighed said diplomatically “Not very good.” He then asked if it was better than the first one. I said “I don’t know.” You know what he said to me after that? “I don’t really like movies like that or The Hangover movies.” I told him “You are a smart man.” Then I left the theater and walked home.
Posted by Patrick Bromley at 5:00 AM