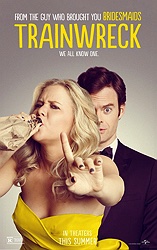 You know that movie that's being marketed as "outrageous female comedian likes to party, directed by Judd Apatow?" Turns out it's one of the best romantic comedies of recent years.

Since his breakthrough hit with The 40-Year Old Virgin a decade ago, writer/director Judd Apatow's films have become increasingly shapeless and indulgent. Ambitious? Sure. Funny? Mostly. But every new movie was messier than the last, culminating with This is 40, a movie that wanted to be personal and incisive and, in its best moments, succeeded but was mostly just muddled and masturbatory. It was the director's biggest misfire and made it seem as though it had become impossible for Apatow to get out of his own way.

That's why his latest film, Trainwreck, is such a welcome change of pace. He's gotten out of his own way and into someone else's -- namely, comedian Amy Schumer, who stars and wrote the screenplay largely informed by some of her own biographical details. She plays Amy (duh), a moderately successful writer for a trashy men's magazine in New York City. She drinks too much, sleeps around and has no interest in growing up. She idolizes her sick father (Colin Quinn, incredibly good), who lived his life the same way, and remains close with her younger sister (Brie Larson) even though she married a nerdy guy with a sweet but nerdy kid. Amy is assigned to write a story about Aaron Conners (Bill Hader), a Manhattan sports doctor who's on the verge of performing a high profile knee replacement surgery on Amar'e Stoudemire of the New York Knicks. Amy and Aaron hit it off and start to get serious, throwing her entire life and worldview into chaos. 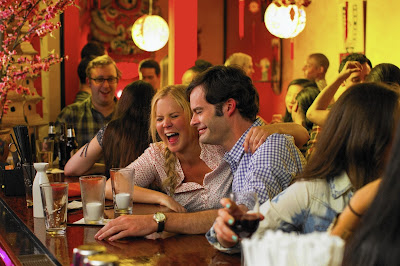 First things first: Trainwreck is funny. It's very funny. Better yet, it's funny in my favorite way, which is that it just lets a bunch of funny people play funny characters who say funny things. There are hardly any big "gags" in the movie -- no one poops in the street or gets covered in throw up (there is one puke joke, but it's quick and handled well). The laughs come from dialogue and character, and that's an increasingly rare thing in Hollywood comedies because there are fewer moments that generate discussion or can be stuck in a trailer. The script, by first-time screenwriter Schumer, is filled with clever, vulgar and sharp dialogue that doesn't require every character in the movie to sound like her voice. These are people with their own distinct personalities who make jokes and say things that only they would say.

Schumer's script is incredibly smart. While its structure is formulaic -- the beats in Trainwreck are the same beats in almost any romantic comedy of the last 50 years -- it is full of insight and honesty and does not attempt to sand off all of the rough edges of its protagonist. We like Amy because she is funny and because she knows who she is, but that doesn't make her any less of a fuckup to whom it is almost impossible to get close. While I can't say for certain that this is the role that will turn Schumer into a movie star (it might be too specifically tailored to her strengths, which is a hard thing to recapture), it absolutely should. She's hysterically funny and sexy and vulnerable and fearless, and when the time comes to do some heavy dramatic stuff -- and the time does come -- Schumer completely nails it. There is a rawness to the conflict in her script and to her performance that keeps the film from floating away as another romcom trifle and grounds it in the uncomfortable realities of navigating our personal relationships. Cameron Crowe has been trying to recapture Billy Wilder's formula of mixing the sour and the sweet for years with little success. The movie he ought to be looking at is Trainwreck. 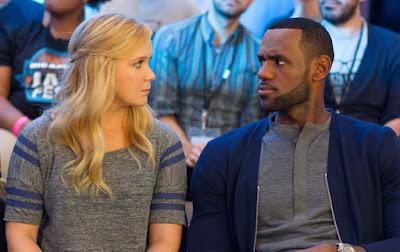 In fact, the only stuff that doesn't work is typical Apatow: celebrity cameos and insider winking meant to show what good sports all these famous people are and a running time that overstays its welcome somewhat (though at 125 minutes, Trainwreck is the director's shortest movie in 10 years). The cameos are the most egregious, with far too much screen time handed over to Lebron James. He's not bad in the movie -- he gets at least one big laugh with a tossed-off line of dialogue -- but Apatow's idea of having James send up his image is to portray him as a cheapskate who watches Downton Abbey and quotes Kanye lyrics. It all comes off as a little self-satisfied. At least the Amar'e Stoudemire stuff is integral to the plot, but the athlete still gets too much camera time, as though Apatow was so excited to get these famous sports figures to star in his movie that he couldn't cut any of their stuff. The worst of all of it, though, is a late-movie sequence with a couple of cameos that's the only truly terrible scene in the movie. The Blu-rays and DVDs of Apatow's movies have become famous for the amount of deleted scenes and outtakes packed into them. This should have been one of those.

But these are mostly nitpicks, because for the most part Trainwreck is Apatow's strongest work as a director. Part of what has always made his films feel so shambling is that he has always seemed interested in servicing the gags first and the story a distant second, so he indulges in scene after scene of his repertory company improvising banter and only eventually gets around to advancing the plot. With Trainwreck, he strikes a good balance of serving the story and the jokes. Maybe it helps that he doesn't have his fingerprints all over the screenplay; while he did work on it, this is the first movie he's directed in which someone else gets sole writing credit.

The incredibly deep bench of actors and comics in the cast helps, too. It shouldn't be overlooked that Trainwreck is a big-budget romantic comedy with the incomparable Bill Hader as its leading man. He's great in the movie; while a brilliant comic and character actor, Hader is surprisingly good at playing "normal." Aaron might actually be a little too perfect. The film goes out of its way to make Amy a flawed character but doesn't give as much dimension to Hader, who exists largely as a standard to which Amy wants to meet. Hader is so charming in the part and has such a relaxed and fun chemistry with Schumer that I can forgive the simplicity of his character. There are also excellent supporting turns by Brie Larson (good in every movie) and comedians like the aforementioned Colin Quinn and Mike Birbiglia as Amy's brother in law. In fact, nearly every small role in the movie, from the homeless guy played by Dave Attell to the nurse played by Rachel Feinstein, is filled with one of Schumer's comedian friends. As someone who knows and follows stand-up, it's just an added bonus.

I don't know if I'm ready yet to call Trainwreck Judd Apatow's best movie, but I definitely think it's in the running. It's the culmination of a lot of the things he's been working toward over the last decade. While it deals with his favorite theme of arrested development (you know, the only thing his movies are about), the change in the gender of his protagonist helps -- the "boys will be boys" worldview of much of his other work replaced with something more real. Amy is just as flawed as previous Apatow heroes (maybe more), but her flaws come from a place of real pain and self-preservation. She's not refusing to grow up because it's fun to be irresponsible; she refuses to grow up because she's terrified of what will happen if she takes that leap. Her arc is what makes Trainwreck special. This isn't so much a film about "happily ever after" as it is about a willingness to try and make it work. That's all any of us can do, and it takes the responsibility of the relationship away from the whims of fate back into the hands of the people in it. Movies aren't usually willing to do that. It might be easy to fall in love, but human beings actually have to work at relationships and it's harder for some than for others. Trainwreck understands that. It's surprisingly moving and honest for a movie this funny.
Posted by Patrick Bromley at 12:00 PM