The Overlook: Man in the Dark in 3-D!

I have seen hundreds of films noir, but this is the first one that put a rollercoaster in my lap!

No, that is not a euphemism.

Twilight Time’s 3-D Blu-ray disc of Lew Landers’ 1953 Man in the Dark is revelatory. It is also tedious. It is a great time. It is poorly written. It seems really long, yet it is only 70 minutes. Kinda like life, babies.

The great success of Arch Oboler’s 3-D Bwana Devil in 1952 sent all the major studios scrambling to make more 3-D films. The first major studio picture in 3-D was supposed to have been Warner Brothers’ House of Wax with Vincent Price. Columbia Pictures, the little studio that could, rushed Man in the Dark into production—principal photography took only 11 days—and it premiered 48 hours before House of Wax. The winner by a (three-dimensional) nose: Columbia Pictures! 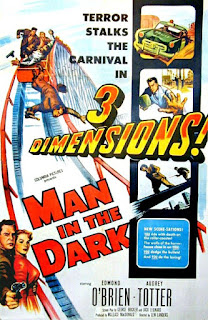 Of course, one could argue, “What was the rush?” That original 3-D boom was effectively over in less than a year, with many films originally shot in 3-D released “flat.” I find it interesting that the current 3-D boom, which began with the release of James Cameron’s Avatar in 2009, has lasted SIX TIMES longer than either the original 3-D boom of the 1950s or the 3-D “revival” of the 1970s. (The ’70s delighted in reviving all kinds of things from the ’50s. That’s how we got Fonzie!)

Could the current popularity of 3-D movies be partially attributed to the fact that today, studios can CHARGE MORE for the technology? (There was no surcharge for those godforsaken glasses in either the ’50s or the ’70s.) Viva capitalism! Viva le upcharge!

The Plot In Brief: Steve Rawley (Edmond O’Brien) is a career criminal who faces ten years in prison for a recent heist. Well-meaning Dr. Marston (Dayton Lummis) wants to cure Rawley of his criminal nature by performing experimental brain surgery on him (There are shades of A Clockwork Orange here). Rawley will wake from the operation with a kind of permanent amnesia, and so, the good doctor hopes, will “forget” he is a criminal.

I know, I know—I’m not buying it either.

Problems arise when Rawley’s old criminal gang kidnaps him from the hospital and demand to know where he stashed the money from their last job. Post-brain-surgery Rawley claims he just doesn’t remember. Three-dimensional plot complications ensue. 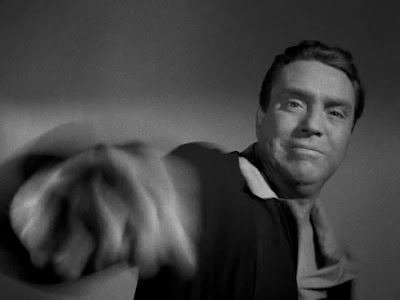 Every element of Man in the Dark screams that it was a low-budget film rushed into production to exploit a fad. The plot is full of holes: though the entire story is predicated on the Rawley character NOT being able to remember anything, when the time comes, he remembers plenty. The dialogue bends over backwards to affect a “noiry-noir” tone that is often ridiculous. For a time, Rawley thinks he hid the money in a candy box. At one point, his girl cautions him, “That candy box could turn into another kind of a box, Steve—one they’ll bury you in.”

But Man in the Dark looks great. The cinematography constantly belies the film’s rushed schedule and hectic provenance. It is one of the best transfers of a black and white film I have ever seen. The cinematographer on the film was Floyd Crosby, father of David Crosby (of Crosby, Stills, Nash, & Young.)

The fact that the movie could look so terrific in spite of its shooting schedule—which, remember, was only ELEVEN DAYS—is a living testament to the professionals of Old Hollywood, like Crosby, who knew their jobs so well that they could routinely make slick, compelling silk purses out of the most stubborn “sow’s ears” of scripts, stars, or schedules. 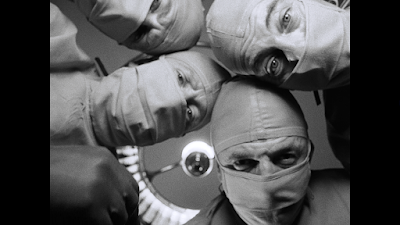 Still, I’m not sure anyone could sit through it all without the 3-D. The attraction here, as director Lew Landers clearly knew, was the gimmick, and he shovels up the 3-D jiggery-pokery with relish. One critic called Man in the Dark “the 3-D-est 3-D film ever made.” The audience is poked with a hypodermic needle; chased across rooftops; shot at; punched; tortured with a lit cigar; scared by a spider; shot at again; kissed; dive-bombed by a psychotic pigeon; shot at again—this time on an amusement park ride, The Whip; and ultimately forced to ride a “roller coaster of doom.” The 3-D effects here are CRAZY good.

When the film was over, I felt like I had gotten my money’s worth.

POINTLESS ASIDE: The rollercoaster section of Man in the Dark is more thrilling, and certainly better directed, than anything in the film Rollercoaster, which I wrote about a year ago. One would think that the 1977 film could improve on the 1953 film, but one would be wrong. You are TERRIBLE, Rollercoaster!

I have always been a fan of Edmond O’Brien—from his early work in The Hunchback of Notre Dame, White Heat, and DOA to his later, amazing performance as Freddy in Sam Peckinpah’s The Wild Bunch. O’Brien never phoned it in. In Man in the Dark, however, he is handed a paper-thin script and character; let’s just say that he does the best he can with what he was given. His personal charisma is a laundry line on which the filmmakers can hang their silly plot, tenuous suspense, and cool 3-D set pieces.

It’s appropriate that the climax of Man in the Dark takes place on a rollercoaster, as I have always seen 3-D films as more like amusement park rides than straight narratives. At its inception, film really was a carnival sideshow—“Step right up! View strange and exotic things never glimpsed in real life! Only a nickel—step into the tent!” The invention of such gimmicks as 3-D, Sensurround, and now these new D-BOX shaking chairs have helped movies finally bring a literal thrill ride to its own metaphoric carnival sideshow.

Ironically, the thrill rides at big amusement parks are now becoming more like the movies: motion simulators that jostle us, spray us with water (God, I hope it’s water!), thrust us through steam and smoke, subject us to god-awful loud noises, jostle us, prod us, and generally whip us around for three to four minutes at a time. This is entertainment. 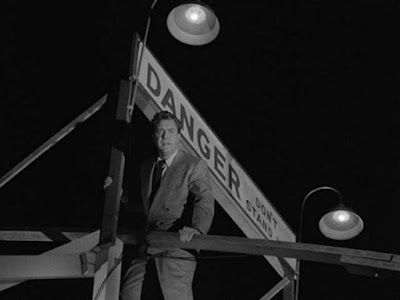 In our relentless march backwards toward becoming a more coarse and ignorant society, perhaps we have lost the ability to empathize with the people on the screen—especially during big blockbuster movies that spend more time on fighting robots than on character development. Maybe audiences raised on the constant distraction of ever-present digital media increasingly need additional help to fully immerse themselves in the reality of the movie. Larger screens; hyped-up, explosion-filled soundtracks; shaky seats; and yes, 3-D, all may be merely filmmakers’ tricks to provide for us what our atrophied imaginations no longer can conjure.

So Man in the Dark stands as a convenient metaphor for modern movies: all sizzle, no steak. There really is no script and no plot and the characters are non-existent, but the technology is impressive and entertaining in and of itself, and that somehow makes the rest of it tolerable to the point of actually being entertaining, at least while it’s happening.

Too many movies today seem to exist to prod and poke and jostle. They distract us with moving, shiny objects. The scripts are thin. Those cannot be real people up on the screen; they are all superheroes, ciphers, or cannon fodder.

Sitting in the movies, we are all, collectively, the man in the dark.