Flicker Alley’s new Blu-ray disc is a mixed bag of delights, and by “delights” I mean “things that are trying to escape the bag and poke you in the eyes.”

I intend to spend most of July with a top-shelf margarita in each hand… wait, wrong column; that was from my piece for F This Liver! …(shuffle shuffle… okay, found it.) I intend to spend most of July discussing obscure 3D movies that are only just now being released on Blu-ray. My purpose, babies? So that readers with the requisite players and television machines can decide whether to seek out these releases, and readers without said equipment can decide whether what’s out there warrants the investment. I’m like a Terminator who helps you CHOOSE your own FOOTURE!

Flicker Alley’s recent release of 3D Rarities is a great place to start.

The highlights of the disc are varied and delightful. One of the many reasons to recommend it is that producer Ron Furmanek and the fine folks at Flicker Alley have given us a disc that is at once history lesson, demonstration disc, and crazy party background fun. 3D Rarities is arranged in chronological order, so watching it straight through with the various commentaries turned on is essentially a film class on early 3D; but viewers can also shun education and bip-bop through the well-designed menu to get at the in-your-lap highlights, which are plentiful.

I love how associate producer Jack Theakston points out in his commentary track that some of the images (specifically, men pointing guns at the camera and women in swings) would become mainstays of 3D cinema—and then the disc proceeds to show us these tropes again and again across the span of 75 years of 3D filmmaking. After watching the disc in a single sitting, I felt vaguely as if I had been held hostage on a playground populated by barely clad ingénues. 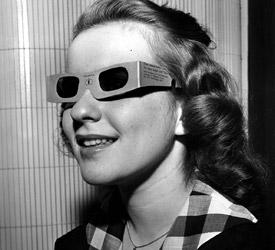 Before I go into detail about my favorite shorts here, I should point out that the restoration work this disc represents is nothing short of heroic. The producers gathered films that were originally produced in a myriad of 3D processes and got them all to “work” on modern 3D television equipment. And work they all do—even the more obscure, historical, or otherwise dull material features mind-blowing three-dimensional effects that pop right out of the screen, as they should.

For me, the highlights of the disc were the four original 3D trailers presented here for the first time with their original depth restored: coming attractions for the 1953 movies The Maze, It Came From Outer Space, the western Hannah Lee, and Rita Hayworth’s Miss Sadie Thompson. All of these are wonderfully produced (sorry, fans, the ICFOS trailer withholds the “money shot” of the comet crashing to Earth) and, except for the last film, feature unique footage shot expressly for the trailer. The gorgeous state of these trailers (again, with the exception of Thompson) begs the question: why are these films NOT being re-released on 3D Blu-ray? I expect that the answer is that the major studios’ home video departments secretly know that I am the only one who would actually buy them. The fact that Universal included a 3D version on the Blu-ray of Creature From The Black Lagoon was truly a bonus. Man, would I love to have a 3D copy of It Came From Outer Space.

Universal, you should give me what I want! I am an annual passholder at your theme park, dammit! 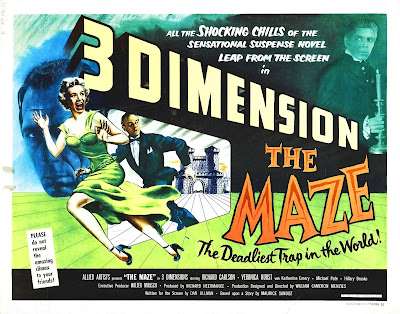 Although somewhat less entertaining, I also enjoyed the following segments: the Rocky Marciano/Joe Walcott prize fight filmed in 3D (all ninety seconds of it); the National Film Board of Canada/Norman McLaren shorts; and the strange Slick Slaven nightclub routine, “Stardust in Your Eyes,” though it features hardly any 3D effects. I am sure I would have enjoyed the inevitable striptease short, “I’ll Sell My Shirt,” if it weren’t vaguely misogynist and didn’t star a stripper who looks like a man in drag. (Is it misogynist to want the stripper to be prettier? Look, I don’t want to be a jerk-- I seriously don’t know anymore.) 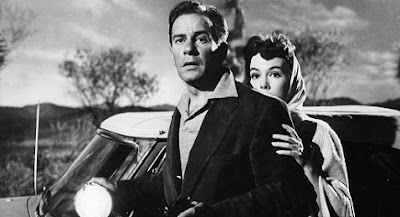 The Plymouth 3D promotional short, New Dimensions, which originally screened at the New York World’s Fair, is fascinating in its ingenuity and simplicity. This vivid color short demonstrates a new Plymouth automobile being put together piece by piece. Every few moments one suspects the filmmakers are afraid their audience is getting bored, so a car component (here a transmission, there a steering wheel) is thrown right into the audience’s faces through the wonders of 3D. Like many early attractions at Disney theme parks, this short strikes a nice balance between education and sensation. I actually learned a lot, and at one point felt a front bumper graze my forehead.

My absolute favorite part of the disc is the 3D Caspar the Friendly Ghost cartoon, "Boo Moon." It looks first-rate, features some great dimensional effects, and is really funny. This short served as a kind of celluloid hors d’oeuvre, whetting my appetite for more 3D shorts that I know were produced and am hoping still exist.

George Carlin famously observed that doing cocaine made one feel… like doing more cocaine. This new Flicker Alley disc made me crave more similar Flicker Alley 3D restoration discs. This first attempt, 3D Rarities, is highly recommended. Just say “no”…. to NOT seeing this Blu-ray! (Also, to drugs.)
Posted by Patrick Bromley at 5:00 AM