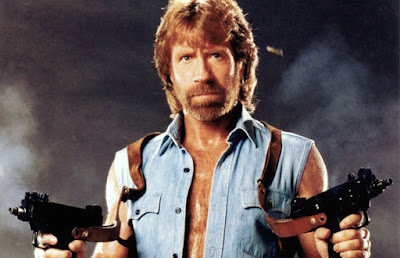 I'm seeing this movie in a whole new way.

I've already written about the 1985 action movie Invasion USA once before for #HeavyAction, spending most of the column complaining about the superstardom of its star Chuck Norris who, despite his karate abilities, remains arguably the dullest and least charismatic action star the genre has ever produced. I don't usually write about movies more than once at F This Movie!. That's not a rule or anything, but because there are so many movies I want to cover and still so many things I want to see, it's hard to justify doubling back and talking about something about which I have already said my piece.

But I spent part of this 4th of July weekend with JB and Adam Riske at a 35mm repertory screening of Invasion USA at Chicago's Music Box Theater and it occurred to me that there's more to say about this film. Truth be told, there are probably fucking VOLUMES to be written about this film, but there's one specific angle I want to discuss. Go with me on this.

Invasion USA is a slasher movie, but Chuck Norris is the slasher. If you don't already know the story of the movie, here it is: the ever-creepy Richard Lynch plays Mikhail Rostov, a Soviet terrorist bent on attacking the US and creating war. The film opens with him and his army murdering an entire boat populated by Cuban refugees -- including many women and children -- attempting to enter the country. He randomly throws a lady out of a window and shoots multiple men in the dick. He blows up families decorating their trees for Christmas. As the attacks worsen, the American people begin turning on one another, creating chaos and destruction all over the streets of Florida. The only thing stopping Rostov is Matt Hunter (Norris), a former CIA operative now living alone in the swamp. Rostov and Hunter have history, as the latter was once responsible for the former's capture. Rostov is slightly obsessed with Hunter, making his primary mission taking him out before he can interfere with the terrorist's plans. They blow up Hunter's house and murder his friend, thinking they've killed him, too. They didn't. So the rest of the movie consists of terrorists trying to kill American citizens -- often succeeding -- and then being foiled and murdered themselves by the perpetually denim-clad Matt Hunter.

There's a scene about a third of the way through Invasion USA in which a CIA agent comes to find Hunter to enlist his services. He walks around a dark house for what feels like forever (a lot of stuff in Invasion USA takes a really, really long time) until Hunter springs out at him and takes him by surprise. It's a good jump scare; in the theater I saw the movie on Friday night, the audience was audibly startled. The guy in front of us even spilled his soda all over the place -- the first and only time I've ever actually seen a drink go flying from a jump scare.

The moment got me thinking about the rest of the film. Given that it's directed by Joseph Zito, who one year before had made Friday the 13th: The Final Chapter (still my favorite in the series) and had previously directed The Prowler, there's already a connection to slasher films. It's more than just this scene, too; I began to notice that Zito uses quite a bit of the language of slasher movies in Invasion USA. 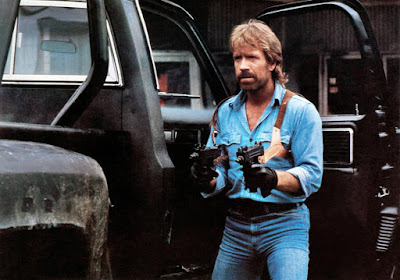 In the tradition of Jason Voorhees and Michael Myers, Matt Hunter is essentially a silent stalker -- even his name says as much. He can be anywhere at any time, popping up and killing you when you least expect it. That's all he does in the second half of the movie -- appear and disappear at will with total disregard for the laws of time and space, same as any '80s slasher. His home is destroyed, his "family" killed off; minus some major disfigurement, he's basically Jason (particularly in the 2009 Ft13th remake) or Victor Crowley from the Hatchet series. Chuck Norris' usual stiffness in front of the camera reads like sociopathy in this context: there is no anger, no passion in his eyes. There is just blank stalking followed by blank murder. Repeat.

This means that Richard Lynch -- the villain of Invasion USA, and a particularly nasty one at that -- is the film's "final girl" of sorts. This is where the comparison breaks down a little because Rostov does a lot of heinous shit that a true final girl would never do, but if you can look past that there is more of that slasher movie language in the way Zito approaches Rostov. He doesn't want to kill Hunter because he's afraid Hunter will foil his plans -- I mean, that's part of it, but it's clearly much more personal than that. He is haunted and terrorized by Hunter. He has nightmares about his brush with death during their first encounter and wakes screaming from his sleep. When he makes killing Hunter his first priority, it's less about protecting the mission than it is about settling the score and putting his fears to rest. He's taking the fight to the monster that still scares him. It's a trope we see in slashers all the time, whether it's Friday the 13th Part 3 or Hatchet II or even Glenn McQuaid's frustrating segment "Tuesday the 17th" in the original V/H/S. 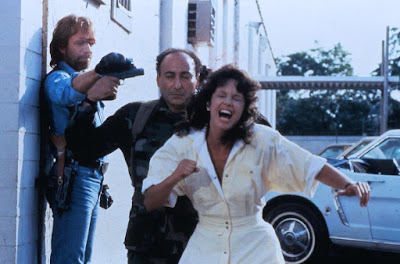 When Rostov and Hunter finally come face to face in the movie's final moments, Zito again stages the scene like a slasher film. He shoots over Richard Lynch's shoulder, emphasizing the negative space in the frame behind him -- space we assume will be filled by Chuck Norris at any moment. It's unusual to approach the climactic fight of any action movie from the villain's perspective, but a lot of Invasion USA is told that way. Rostov is really the only character we get to know on any level, and while he's a monster we at least understand what his motives are and what is driving him. Chuck Norris, on the other hand, is a mystery and a myth. He's a stalker. A slasher. He might as well be Arnold Schwarzenegger in the original Terminator -- which, as has been argued by a number of writers, is really just a slasher movie in disguise. In that case, the parallels speak for themselves.

So let's say I'm right (thanks!) and Invasion USA is a secret slasher movie. So what? What does it mean? Maybe nothing. But I think there's something to the idea that it represents a crossover between the jingoistic action movie (the MOST jingoistic action movie) and the slasher movie, probably two of the biggest subgenres of the 1980s. There are countless horror scholars who have pointed out that most slasher films are told from the killer's perspective even when they aren't designed to be going all the way back to the opening POV shots of John Carpenter's original Halloween. Perhaps the shifting of this perspective from masked murderer to action hero is a more comfortable form of audience identification; we get to work out our bloodlust by taking out terrorists instead of foxy co-eds who have done nothing wrong but smoke a little weed and have some sex. 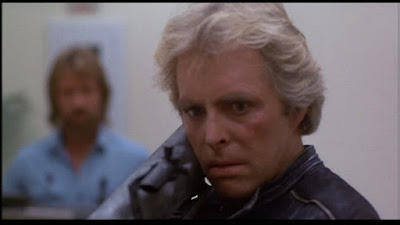 Invasion USA is still not a good movie. It's dumb and ugly and violent and fascist in the way that most Cannon action movies of the '80s are. It's also repetitive and far too sluggishly paced. But seen through this new lens, its construction becomes sort of fascinating. I don't know if Zito directed the movie this way on purpose or if it's a side effect of his other work -- echoes of his previous films finding their way into this one -- but the result is an action movie that feels like few others. One would think that because it exists at a crossroads of two of my favorite kinds of movies, I would hold Invasion USA in high regard. I still don't. I like what it represents about action movies of the '80s and how it's one of the definitive Cannon movies, but the movie resists my affection in all but its craziest scenes. Luckily there are several. The only thing this new reading really does is prove that Chuck Norris was miscast in most of his starring vehicles. If you watch Invasion USA as a slasher movie, you realize that his blank expression and methodical approach to performance makes him more suited to play the villain than the hero. Dude's a stone cold psycho. Teenagers and '80s terrorists beware.