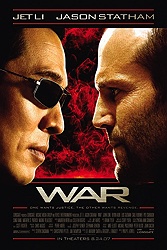 Adam Riske: War (2007, dir. Philip G. Atwell) No one talks about this movie and that's a shame because I think it's actually pretty good, especially in comparison with the varied filmographies of both Jet Li and Jason Statham. It's been a long time since I've seen War, but what I do recall is that the action scenes are fun and well-done and the movie has a twist that I didn't see coming, which makes the movie about 10% cooler than it already was before. 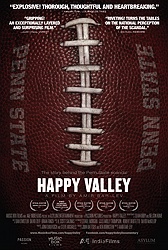 Adam Thas: Happy Valley (2014, dir. Amir Bar-Lev) You may hate football, you may even hate sports, but unless you have been living in a cave the past few years, you know about Jerry Sandusky. In the rare case you have been living in a cave, Jerry Sandusky was a former assistant coach at Penn-State University that has been convicted of 40 counts of child molestation. It is probably the biggest sports related story since the OJ Simpson trial and it all took place on a college campus. Happy Valley does an AMAZING job at laying out the timeline and helping the outside observer understand what happened and who was involved. The timeline serves a bigger purpose with the help of some fantastic interviews to explain how something like this happened and how it impacted so many people. Happy Valley tells the story to you as if you are a town resident and how each fact revealed drove some of the Penn State fans further away and some of them closer. It’s an interesting look at the line between sports and reality, and the impact and reactions people have when their heroes let them down in epic ways. I highly recommend this one. 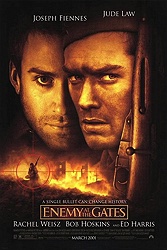 Heath Holland: Enemy at the Gates (2001, dir. Jean-Jacques Annaud) This World War II drama doesn't shy away from the action as it tells the story of a Russian sharpshooter and a German sniper during the Battle of Stalingrad. Jude Law, Joseph Fiennes, and Rachel Weisz are the lead actors, but the supporting cast is absolutely chock-a-block with great performances from famous character actors. It's smartly scripted, superbly acted, and gorgeously shot; I've always thought Enemy at the Gates never enjoyed the reputation it deserved and is an outstanding--and different--addition to the pantheon of great World War II films. 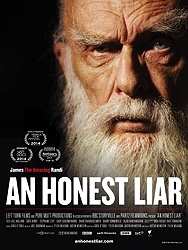 JB: An Honest Liar (2014, dir. Justin Weinstein & Tyler Measom) I caught this earlier in the year at our beloved Music Box Theatre, and I was of two minds about it. I have been a fan of “The Amazing Randi” ever since he decided to use his MacArthur Genius Grant money to debunk professional psychics. The history portion of the film, documenting James Randi’s unique life and art, is impressive. The narrative spin and “surprise” ending included by the filmmakers, I thought, was gimmicky, exploitative, and unnecessary. YOU be the judge and jury! PLUS: If you have it in your mind to watch a double feature, make it a “magic night” by viewing (or re-viewing) Deceptive Practices: The Mysteries and Mentors of Ricky Jay (2012, dir. Molly Bernstein) I film I recommended years ago that just gets better and better each time I see it. 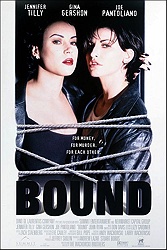 Patrick: Bound (1996, dir. The Wachowskis) The realization that Bound is almost 20 years old has me blowing my head off. Before I do, you really should see it if you haven't. It's the best -- crazy overheated and twisty and sexy and funny and stylish and cool. It's one of my favorite noir films since the heyday of noir, with Joe Pantoliano giving his greatest performance. There's a scene in which his badass gangster is so overwhelmed by the events piling up against him that he just begins to cry, something I can't remember seeing in a movie before that. This is the first film directed by the Wachowskis, and while I'm happy to see them working on an ambitiously massive scale through stuff like The Matrix trilogy and Cloud Atlas, I miss them working this small. Bound is very small. It's also terrific.
Posted by Patrick Bromley at 12:00 PM