Off the Shelf: The Last American Virgin (Blu-ray) 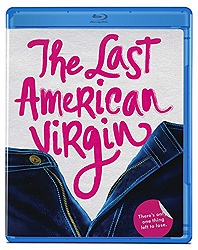 The Last American Virgin is one of the best teen movies of the 1980s that often appears to be one of the worst. It is crude in both its content and its execution, falling victim to every single raunchy teen comedy cliché including those that, being one of the first films in the teen movie cycle of the '80s, it helped invent. The acting is amateurish, the humor broad and often ugly. It is a crazy movie, feeling like it was made by Martians attempting to approximate American teenage culture instead of by people who knew it firsthand. And yet so much of that melts away as the film goes on, because for all of its faults The Last American Virgin sets some things really, really right. It knows how being a teenager feels. 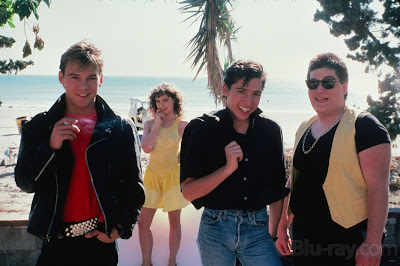 Lawrence Monoson (Friday the 13th: The Final Chapter) stars as Gary, an extremely average teenage boy living in early '80s Los Angeles, delivering pizzas for spending money and trying his damnedest to get laid with his best friends, handsome Rick (Steven Antin) and chubby David (Joe Rubbo). When a new student, Karen (Diane Franklin of Better Off Dead fame), catches his eye, Gary is totally smitten. Too bad she's more interested in Rick. While Gary navigates the teenage waters of shedding his virginity, gets his first case of crabs and gets involved in a literal dick-measuring competition, he falls harder and harder for Karen and careens head first into possible heartbreak.

The story behind The Last American Virgin is an interesting one. Boaz Davidson, the film's writer-director, had a string of hit movies in his native Israel known as the Lemon Popsicle (Eskimo Limon) films. After the success of the 1978 original, seven more sequels would eventually be produced -- three by the time The Last American Virgin was released in 1982. Menahem Golan and Yoram Globus, who had produced Lemon Popsicle for Davidson in Israel, had already launched their Cannon Films in the U.S. and asked Davidson to come and remake his movie in America. The results were not nearly as successful; the film did just ok at the box office but left little impact aside from its shockingly incredible soundtrack, which is jam-packed with huge hits from The Cars, The Police, Journey, The Waitresses, Devo, Oingo Boingo, U2 and REO Speedwagon. Seriously, the thing plays like an "I Love the '80s" mix; I don't know if Golan and Globus spent a fortune on music licensing or were just canny enough to buy up the music before these bands either broke or caught on that there was money being left on the table, but the soundtrack is a thing to behold. Perhaps that's why most of the marketing made it the focus instead of the movie. 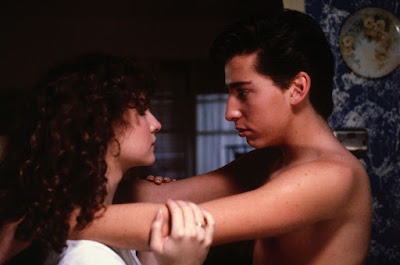 For so much of its running time, The Last American Virgin is yet another sub-par '80s sex comedy, one which is terrified of women and has roughly the same relationship to reality as an episode of Saved by the Bell. The jokes are stupid, the characters reduced to the broadest of stereotypes. I'm not sure if it's because this was Davidson's first American movie or if it's because English was not his first language, but the film is put together very strangely. Much of the dialogue has been looped in ADR (particularly in Diane Franklin's scenes), and that fact combined with Davidson's tendency to shoot in closeups and edit in a back-and-forth, you speak/I speak style has a disorienting effect and makes The Last American Virgin seem even less competent as a film. It's easy to write the thing off as a bad movie because it's been put together like one.

At the same time, though, there is an undercurrent of realism and honesty running through the movie that was lacking almost every sex comedy of the era (era), Fast Times at Ridgemont High notwithstanding. This being his first movie, there are a lot of rough edges to the lead performance by Lawrence Monoson, a kind of gawkier Justin Long. But his rawness gives him an authenticity, too; he both looks and feels less like a professional actor than a real kid plucked off the street to appear in a movie. Davidson's script makes Gary the Job of teen sex (or, if you prefer your references more recent, Dr. William Harford) in that he is constantly tested and fails -- everyone has sex except for him. And for as much as the movie is single-mindedly focused on the hormones of teenage boys and their pursuit of sex in any form, The Last American Virgin is one of the few movies of the period to acknowledge any of the consequences, too. These kids get sexually transmitted diseases. They wind up pregnant and seeking an abortion. They are defeated and humiliated again and again. There is a darkness to the view of sexuality that's totally matter of fact, neither panicked nor preachy. The way that it buts up against the idiotic, juvenile comedy elsewhere in the movie is fascinating. It's a teen sex comedy that keeps getting interrupted by the harsh realities of life. 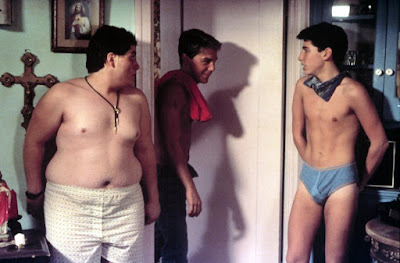 And then there is the last 15 minutes, which I won't spoil here but which elevate the movie from cable staple to the stuff of legend. It is the movie's masterstroke and the reason any of us are still talking about it today. Again, whether Davidson knew exactly what he was doing by subverting the traditional sex comedy or because he simply didn't know the rules of Hollywood formula, the final moments of The Last American Virgin are devastating in a way that neither the preceding 85 minutes nor a lifetime of watching these kinds of movies can prepare us. Even if you don't love the movie, it's worth seeing just once (#seewhatIdidthere) to experience where Davidson takes the story.

Previously available as a now out-of-print DVD from MGM or a Region 2 Blu-ray from Arrow Video, The Last American Virgin finally arrives in HD in the US courtesy of Olive Films. Without having Arrow's transfer to compare it to I can't say if Olive has used the same scan, but the one presented looks very good: colors are well represented and there are hardly any visible signs of age, plus a nice layer of film-like grain over most scenes. What I can say for sure is that none of Arrow's copious bonus features have made their way over

As a fan of both '80s teen comedies and Cannon Films, The Last American Virgin is essential viewing. Those looking for supplements will still need to import the Arrow disc, but for now I'm happy to be able to add this one to my Blu-ray library at all. For a movie that seems like so many other generic entries in its genre, there is nothing else quite like it.