Review: The End of the Tour 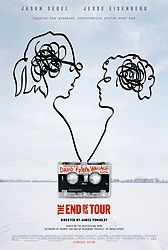 This is my favorite movie of the year so far and it will take a mighty movie to knock it from that perch.

This movie shatters me to pieces. I’ve seen The End of the Tour twice now and it only got better on a second viewing. I hope this review doesn’t “oversell” it somehow, because the movie doesn’t deserve that. All I can say is that it moved me to such a degree that I wanted to jump through the screen and give Jason Segal’s interpretation of David Foster Wallace a hug and tell him to stop being so hard on himself. I felt like I knew this person inside and out by the conclusion The End of the Tour and could feel a lot of my own thoughts and opinions reflected back to me from the screen as I watched the movie. It’s an eerie, sad and exhilarating experience all at once. No movie I can recall gets the 30-something male unmarried malaise better than this one. The fact that it’s about a whole slew of other topics is just a bonus.

I love this movie because it’s predominantly about conversation. Not just any conversation, but rather good conversation. The kind of conversation that happens when two people are equally interested in each other as people and not just as figures or a collection of opinions. Ever have a chat with someone and realize you’ve just talked for like an hour about bullshit and neither of you have asked anything personal about the other, almost as if you’re afraid of having to listen to a person’s real feelings? Well, in The End of the Tour you get a mix of bullshit talk (e.g. David Foster Wallace’s love of junk food or Alanis Morissette) but also conversations of deep feeling, including the interviewing dynamic, male competition (especially with women), love, fame, achievement and the pursuit of happiness. Shockingly, it never feels pretentious either (like, for example, My Dinner with Andre) but rather immediate, raw and sadly funny. 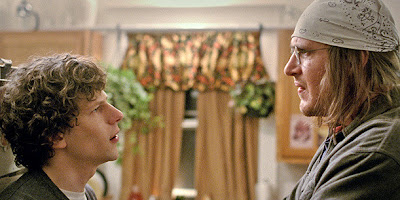 I find The End of the Tour especially gratifying because it fulfills the promise of director James Ponsoldt’s previous feature The Spectacular Now. That was a good movie with many great elements (but also a few bad ones). The End of the Tour is all great elements. The performances from Jason Segal and Jesse Eisenberg (there are other co-stars, like Joan Cusack and Anna Chlumsky, but this is mainly a two actor piece) are exceptional playing on their previous personas but also pushing the actors further as performers. Segal is a big puppy dog and can play someone we like as an audience with ease. That suits the David Foster Wallace role well because the movie is largely about the joy of being ordinary. We, as an audience, should be intimidated by someone as brilliant as Wallace was as an author, but the movie is smart enough to know that just because a person is a genius at one thing that doesn’t mean they’re anything other than normal in all other facets of life. Segal perfectly conveys that. There is no formula for brilliance and that frustrates a lot of people who are desperately trying to understand what makes an exceptional person tick.

Jesse Eisenberg plays that frustration very elegantly. I love how willing Eisenberg is as an actor to play someone unlikeable. From characters in Adventureland to The Social Network to David Lipsky in The End of the Tour, he’s never afraid to show different facets of smart people -- specifically their negative traits coming out in the interest of their own achievement or self-preservation. Lipsky desperately wants to have the writing success of Wallace in The End of the Tour, and Eisenberg mixes that hero worship with jealousy in a very interesting way. Segal’s Wallace knows the pitfalls of fame (imagined or unimagined in his case) all too well and is looking out for Lipsky somewhat in a way that a big brother looks out for a little brother. It's weird for a dynamic of interviewer and interviewee and the movie is wise enough to exploit that.

I could go on and on about this movie but I won’t because it’s almost a challenge for me to put into words how much I love it (this is the first time I’ve ignored my notes for a review and just tried to let my admiration for a movie come out as a free-flowing dialogue). It’s a great movie about writers (the terrific script is from Donald Marguiles) and it makes me immediately want to rush out and read the writing of not only David Foster Wallace but David Lipsky as well. The End of the Tour is a rare case where though it might not be a perfect movie, it’s a movie that’s perfect for me. I’m eager for you to see it and let me know what you think.

P.S. The End of the Tour comes from A24, a studio of exceptional taste and quality control. I’ve said it before and I’ll say it again. I love me some A24.
Posted by Patrick Bromley at 12:00 PM