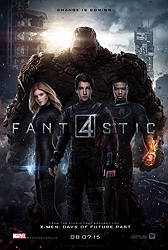 So...the title is meant to be ironic, right?

The new Fantastic Four -- the third cinematic adaptation of Marvel Comics' first family in 10 years -- is bad. Sometimes it's bad in ordinary blockbuster ways. Sometimes its failures are more spectacular. It's a superhero movie destined to be mentioned in the same sentences as Green Lantern and Catwoman.

The big story in so many of the reviews thus far seems to be "it's not all bad." It's rare that critics approach a film -- particularly a huge tentpole film like this, meant to reboot a franchise that Fox got wrong the first time around (and exercise their option to retain the rights to the property while they're at it) -- from a place of assuming the worst and then making excuses for the things that aren't terrible, but such is the toxicity of this film: bad press, massive reshoots, director Josh Trank basically being removed from the production and then tweeting out that the studio should be blamed for its failure upon its release. It is, in the words of the great Roger Ebert, a murdered movie.

But it is not my job to solve a murder. It is my job to examine the corpse. And Fantastic Four has a pretty shitty corpse. While it can help to know some of the context in which a movie was made, all we can really judge as both critics and audience members is what is on screen. It's not fair to blame Josh Trank for the movie's failings, just as it's not entirely fair to (as he himself has done) blame Fox for their handling of the film. This is a case where it seems like they are both wrong. 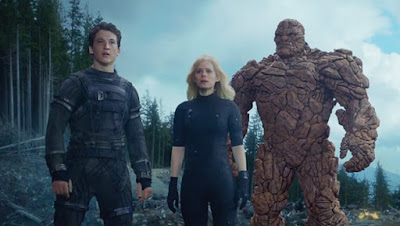 But first, what works: Fantastic Four has a very good cast, a sci-fi vibe that's sometimes ambitious and a first act that's ok. There. I found some positive qualities.

Miles Teller plays Reed Richards, boy genius who invents the first fully functioning teleportation device with his childhood friend Ben Grimm (Jamie Bell). He is recruited by Dr. Franklin Storm (Reg E. Cathey) to work alongside his children Sue (Kate Mara) and Johnny (Michael B. Jordan), as well as the potentially unhinged Victor Von Doom (Toby Kebbell), to build a teleporter that will travel across dimensions. After they succeed, they discover that the government is going to oust them and deny them the credit they feel they deserve for this world-changing discovery. So they get a little drunk and decide to teleport themselves (because someone has seen David Cronenberg's The Fly). Things don't go well, and the team returns -- well, most of the team, because Sue Storm gets left behind because she's a girl but don't worry still gets super powers just by being in the room when the machine comes back -- with horrifying new abilities.

Up to this point, the new Fantastic Four isn't terrible. There are bad decisions that are made and non-existent characterization and some of the worst lines of dialogue you're likely to hear in a movie this year (including explanations for the origins of both Ben Grimm's catch phrase "It's clobberin' time!" and, worse, the name Dr. Doom), but Trank seems interested in pushing the sci-fi angle of the usual superhero origin material. Once the team travels to the Negative Zone -- a boring-looking rock planet built from CGI and green screen -- and gets their super powers, Fantastic Four falls apart faster than you can say "Tim Story." 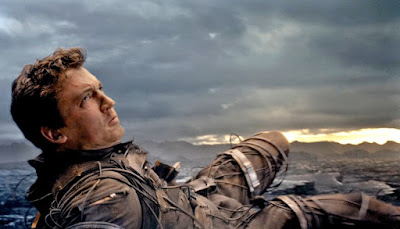 The back half of the film seems almost completely gutted, missing both a middle and a third act. There is a disastrous time jump that cuts out any and all possibility for character development or audience investment. There are unnecessary diversions in which characters leave only to be found and brought back shortly thereafter (this happens twice in the last 45 minutes and could have happened zero times). Motivations make no sense. The effects work is sometimes very good (like with The Thing) and sometimes very shoddy. Literally nothing works. The final battle sequence -- the most obvious victim of Fox's reshoots -- is bad in every single way imaginable, both on its own and for how it is at odds tonally with the entire rest of the film.

Trank's biggest contribution appears to be that he's embarrassed to make a superhero movie -- at least one that exists in the world of costumes and comic books. Everything about Fantastic Four desperately wants to be grounded and tied to reality, which doesn't work when you're making a film about people who get stretchy powers and orange rock skin from visiting an alternate dimension. The movie feels like a holdover from the early 2000s, when studios like Fox were dressing the X-Men in black leather and shying away from the more outlandish aspects of the source material. This means we get a Fantastic Four movie in which everyone wears black suits and Johnny Storm has a button on his suit that controls his flame, because how else could we explain how a guy could turn his fire abilities on and off? The scenes in which the team acquires their powers are treated like a body horror film (more shades of Cronenberg), a valid and unique take on a trope of the genre even if it's all wrong for this material. And don't get me started on the later -- and most Cronenbergian -- sequence in which Dr. Doom walks around making people's heads explode in this PG-13 comic book movie. Apparently someone's problem with previous adaptations of the Fantastic Four is that they weren't dark or hateful enough. 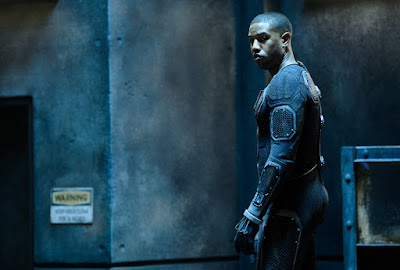 I'd love to accuse Trank of getting the tone of the movie all wrong, too, but that's not exactly fair. Do I think that these characters are better served by an approach that's more upbeat, colorful and fun? Yes. Does that mean that Trank shouldn't be allowed to do his wrongheaded dark, moody version? Of course not. We're at a point now where the superhero genre is ubiquitous enough that it can support multiple interpretations. So the problem isn't that this Fantastic Four gets the tone wrong; it's that it gets the characters wrong -- which is to say that it doesn't really have characters. Reed Richards is the closest the movie comes to have a fully realized human being, while everyone else is but a vague sketch. Sue Storm gets it the worst, being defined by the fact that she has a vagina and wears headphones. Ben Grimm is depressed after being turned into a monster, but that's neither explored nor resolved. The appeal of the Fantastic Four is that they are a family, but these people appear to neither like nor even know one another. Everyone is acting independently all the time. Even Sue and Johnny, who are brother and sister, treat one another as total strangers. A lot of flaws can be forgiven if these movies can capture the essence of the characters and get the spirit of the thing right -- just look at the first Spider-Man or Iron Man films. Fantastic Four takes its inspired casting and its talented actors and wastes all of it.

The drama that took place behind the scenes of Fantastic Four no longer matters. Whatever happened, the guilty parties gave birth to a very bad film -- one which appears to have destroyed the reboot of a franchise in one fell swoop. I can't give Josh Trank credit for making a movie that didn't get released, nor can I condemn Fox for "ruining" something that, based on what I could pick out here, I'm not sure was ever going to work. The end result is a movie with hardly anything going for it: the photography is repetitive and uninspired, the characters all wrong, the tone inconsistent, the action laughably bad, the plotting and pacing awful. The Fantastic Four have appeared on film three times prior to this -- once for Roger Corman and twice in director Tim Story's films for Fox. All three adaptations are often considered the lowest of what the superhero genre has to offer. Somehow, this new Fantastic Four manages to be the worst one yet.
Posted by Patrick Bromley at 5:00 AM