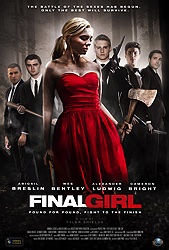 You might think you want to see a movie in which the little girl from Little Miss Sunshine kills people with an axe. You would be wrong.

Photographer Tyler Shields' debut feature Final Girl is a beautiful-looking whiff. Both Shields and his cinematographer Gregory Middleton have taken great care in shaping how the movie is composed and lit and very little care in the story it is attempting to tell. This is the work of a filmmaker with a terrific eye but no idea what he wants to say. 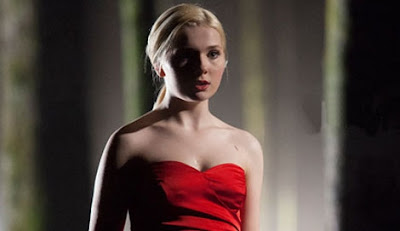 Abigail Breslin stars as Veronica, a girl plucked at a very young age by William (Wes Bentley), who intends to shape her to be a killer so he can take revenge for the murder of his wife and child. After what we assume to be years of training, Veronica is ready to get into action. She targets a group of well-dressed bros led by Alexander Ludwig (and another of whom is Cameron Bright, the little boy from Birth and Running Scared) who have a tradition of bringing young women out into the woods and then hunting and killing them. When Veronica allows herself to being taken into the woods as bait, the boys don't know what they're in for.

Final Girl is basically two movies slapped together, neither one of which is all that good. The first is the older-man-trains-younger-girl-assassin movie, recalling La Femme Nikita and Leon the Professional and Kick-Ass and, most recently, Barely Lethal and Gun Woman. The second half is an extended sequence in which Veronica faces down a group of raping, murderous assholes in ways that are neither interesting nor satisfying. The two halves have little to do with one another except that she's able to do the things she does in the second because of what she learns in the first. It's almost as though it's the result of two completely different scripts combined into a single feature. Only both scripts are bad. 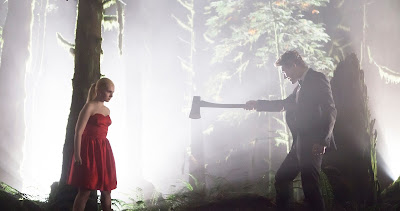 But the thing sure does look good. It's clear that Shields didn't have much of a budget to work with, so he wisely embraces a kind of minimalism throughout; even when the scenes are staged in mostly interior locations during the first half, there is very little set and production design to suggest specificity of place or even period. Final Girl wants to be abstract, meaning there are a lot of questions unanswered and a lot of plot points and relationships left undefined. The screenplay (by Adam Prince, with "story by" credit going to three other writers) only sketches and half forms ideas, and while the goal may have been to give the audience credit by leaving dots unconnected it just comes off as something that isn't finished. There's a scene early on (mild spoilers, I guess?) in which Bentley administers Breslin some truth serum that also makes her hallucinate her worst fears and what she sees is Bentley killing her because she fails him. Ok, fine, but it's mostly there to set up the back half in which each of the douchebags hallucinates his fear during his confrontation with Veronica -- it gives their fights a gimmick and, in at least one instance, allows Shields to indulge in some more expressionist imagery. Even that is robbed of its power, though, by the fact that it's given context. When we see crazy panda heads in a David Lynch movie, we don't know why we are seeing it -- all we have is the unsettling, nightmarish impact it has on our psyche. In Final Girl, we know it's all a big fake. It has all the impact of someone directing a music video.

Even the title is a misdirect. Yes, the film is about that well-worn trope in a matter of sorts, but neither deconstructs nor comments upon it. Something like You're Next is much more successful in the way it plays with the Final Girl because it pulls the rug out from us within the context of a real slasher/home invasion movie -- it makes us think we know what we are watching before telling us we are wrong. Final Girl sets up a girl who has been trained to fight and then puts her into action and lets her fight. She's a "final girl" only in the sense that there have been other victims, though they are dispatched almost entirely off camera. There's the movie in a nutshell, pretending to be more than it is but succeeding in name only. It looks the part, but there's nothing under its skin. 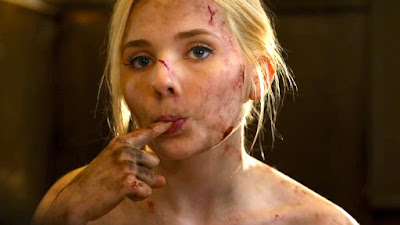 It's such a cliché to call something "all style and no substance," but that really does summarize Final Girl. It is a movie with no characters, only signifiers. It's a movie without a story, only a premise. The visuals are often striking, but striking visuals do not a movie make, especially when they aren't connected to any larger theme or ideas. It's the kind of thing that might have made a strong short film but disappears when drawn out to feature length, like a cotton ball being stretched until it's just tiny strands we can see right through. Tyler Shields may have a good movie in him somewhere. This isn't it.