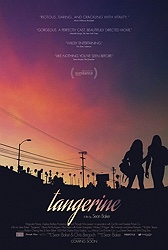 If somebody's going to make a movie on an iPhone, I'm glad it's this one.

Tangerine, the latest movie from director/co-writer Sean Baker, is being sold as "the iPhone movie." And while, yes, it was indeed shot on an iPhone 5 (with the help of a special app for 2.40:1 anamorphic framing and a rig that's not unlike a Steadicam), you wouldn't necessarily know it. Radium Cheung's photography is stunning for digital video, but the camera is so fluid and busy that it has the same free-form immediacy of something like Neveldine/Taylor's work on the Crank movies. I mean this as a compliment. All I'm saying is that we've seen movies that look like Tangerine before, so the iPhone angle is a technical accomplishment and cool piece of trivia, but not a lot more. If that brings the film some extra attention, it's worth it.

Taking place on one day -- Christmas Eve -- in Los Angeles, Tangerine follows best friends Alexandra (Mya Taylor) and Sin-Dee (Kitana Kiki Rodriguez), two transgender prostitutes as they try to track down Sin-Dee's boyfriend/pimp Chester. She's just back on the street after 28 days in jail and finds out that Chester was cheating on her while she was away, kicking off a day-long odyssey that also includes a cab driver and regular customer (Karren Karagulian) and another prostitute named Dinah (Mickey O'Hagan) who gets dragged into the path of whirlwind Sin-Dee. 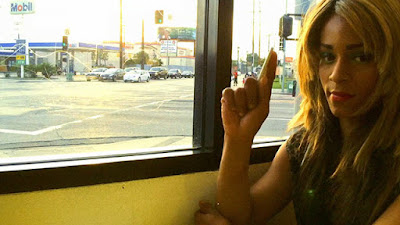 I don't live in L.A. -- I've only visited a couple of times -- so I can't say with any authority that Tangerine gets L.A. "right." But because I've seen enough movies, what I can say is that the L.A. featured in Tangerine doesn't feel like the L.A. of any other film. These are real places, not typical movie locations. The characters aren't typical movie characters (at least not in the leads; they're usually supporting roles or giving convenient exposition in a single scene on Law & Order). They're cab drivers and prostitutes and donut shop workers and cops who aren't superheroes, but instead just know the regulars by name and are willing to cut them some slack. One of the biggest advantages to the way the movie is shot is that it affords Baker and Cheung the ability to take their camera anywhere, whether it's buses or bathroom stalls or, in one memorable sequence, through a carwash.

The actors are not typical Hollywood actors, either. There are some recognizable faces, especially if you've followed Sean Baker's career (O'Hagan, Karagulian and James Ransone have appeared in his other films), but both Rodriguez and Taylor are both essentially newcomers. They're terrific. Rodriguez is all explosive energy and hustle, while Taylor -- who gives the performance of the film -- is more reserved and soulful. She spends a good half the movie promoting a singing gig, and the way she thrusts fliers into the faces of every character she passes is one of Tangerine's best running gags. But I also like how that detail speaks to Alexandra having dreams that extend beyond hustling, even if Baker isn't so tacky as to have it be her defining characteristic. She wants to sing, yes, but not as an escape from her current situation. These women are comfortable in their lives. Tangerine isn't about trying to get out. It's just about trying to get through the day. 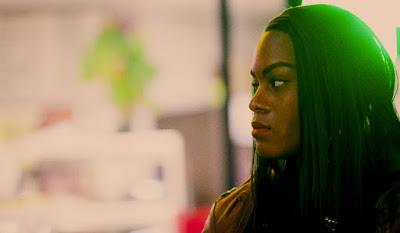 Above all, Tangerine is very funny. It's a film of tremendous attitude and swagger, populated by people who talk fast and bust each other's chops with creativity and color. I mentioned in my review of Trainwreck a few weeks ago that my favorite kinds of comedies are ones in which the characters just happen to be funny people. Tangerine is like that. Writers Baker and Chris Bergoch have a great ear for dialogue that feels natural and improvisational -- it's in the moment and sounds as though it's actually coming from these characters, not from the laptops of screenwriters. Baker makes movies about characters who live in the fringes -- he's drawn to lives that are too often ignored. These are people who prostitute themselves and betray one another and cheat on their spouses and smoke crack, but Baker wastes no time judging them. He would much rather his film focus on how good their hearts are, whether it's Sin-Dee interrupting her mission to make it to her friend's show or a truly moving gesture in the movie's final moments. For as potentially gritty as some of the subject matter is, Tangerine treats it as a matter of fact on its way to exploring all of its characters' humanity. 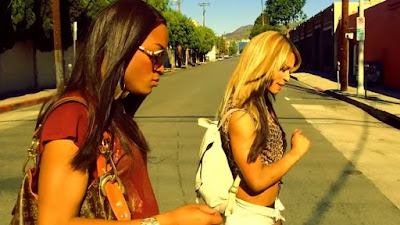 Despite the presence of two trans actors in the leading roles, Baker has not set out to make "the trans movie." Had this been made inside of the studio system, that's exactly the movie it would have been (and it would star Jared Leto doing a "brave" turn and winning an Oscar). Baker is too smart and too sensitive a filmmaker to reduce these women to symbols -- they're individual women, not examples of a community. Baker just wants us to get to know these people and spend a day inside their lives. Tangerine is a film exploding with life and offers a look at the world of some characters who are too rarely represented in cinema. Not bad for a movie shot on a phone.