What do you get when you cross a Spaghetti Western with fine French Camembert?

Cemetery Without Crosses —which is known in France as Une Corde, Un Colt, (translated, A Rope, A Colt) but which is known in every other country in the world as whatever translates to Cemetery Without Crosses, because you know, THE FRENCH, is a late 1960s Western done in the style of Sergio Leone but written and directed by popular French actor Robert Hossein, who also stars in the film. The Leone influence is everywhere: in the framing of shots, the music, the storyline, the performances, and the stylized use of violence. In fact, Leone actually “guest directed” a single scene in the film, and was originally supposed to play a bit part.

Unlike a true Leone film, however, the whole of Cemetery Without Crosses never adds up to more than the sum of its parts. While aspects of the film are fascinating, this is another example of the old saying, “It knows the notes, but not the music.” 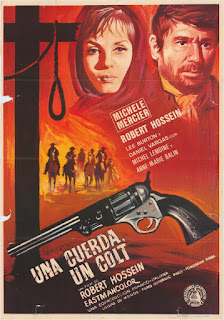 The Plot In Brief: When the evil Rogers clan kills her husband Ben by hanging him from a tree and forcing her to watch, beautiful Maria Caine (Michèle Mercier) vows revenge. Enlisting the aid of her two shifty brothers Thomas and Eli (Guido Lollobrigida and Michel Lemoine) and an old friend, former gunfighter Manuel (writer/director/handsome Frenchman Robert Hossein), Maria plans to kidnap evil Papa Rogers’ daughter Johanna (Anne-Marie Balin) until the murderous family meets her demands. Through a series of unfortunate misunderstandings and deliberate deceits, no one’s plans go exactly as expected…

Cemetery Without Crosses comes across as a knowing Leone mishmash/pastiche/rip-off/tribute (mishtiche-ripute!) It is also a true existential Western. Parts of the film seem uncannily to have been directed by early 1960s genius wunderkind/king of boredom Michelangelo Antonioni. The film reminds its viewers again and again that violence is not the answer, yet settles every one of its characters’ problems with extreme violence. 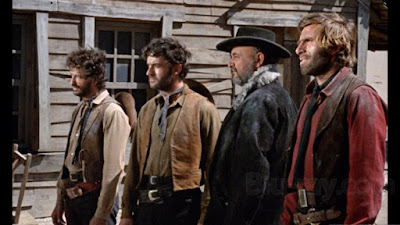 TRIVIA FOOTNOTE: Although he is credited as a screenwriter on almost every version of this film, our old pal Dario Argento did not contribute to the screenplay in any way. Writer/director/Frenchman Hossein claims it was a marketing gimmick dreamed up by overseas distributors.

The main reason to recommend this odd film—and I do recommend it, heartily—is the inspired cinematography by Henri Persin. Though dealing with subject matter that is ugly, this film is very beautiful to look at and every shot is a well-composed painting. The film opens in black and white and after the credits slowly goes to full color. It’s an effective choice; viewers get the impression of a history book full of early daguerreotypes being brought to life. At movies’ end, the image changes back to monochrome, as if the filmmakers are placing the events back into the past. I am not in the habit of recommending a film based solely on this one element, but as Martin Scorsese is fond of reminding us all… pictures! They’re called PICTURES! 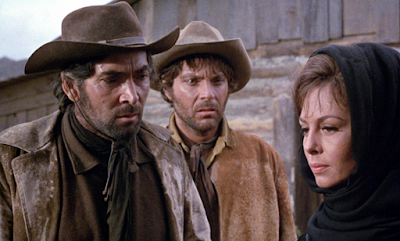 THREE QUIBBLES: Firstly, two of the actors—leading man Robert Hossein, who plays our hero, Manuel; and Guido Lollobrigida, who plays Thomas Caine—look a lot alike. For the first half of the film, I was confused, especially in the long shots, about who was doing what. Also (and I realize that this is weird and personal to the point of neurosis) the other Caine brother, Eli, played by Michel Lemoine, looks exactly like Jeff Tweedy from the band Wilco, who is a personal nemesis of mine. (Please do not attempt to defend him or Wilco in the comments section, I WILL NOT be moved on this!) Throughout the film I kept expecting him to whip out an acoustic guitar and mumble out alt-folk ditties from his very punchable face-hole. It was distracting.

My third quibble involves (sigh) Maria. Before viewing Cemetery Without Crosses and writing this column, I was unfamiliar with lead actress Michèle Mercier. I have since discovered that she has enjoyed a career in France spanning more than fifty years, and has worked with Francois Truffaut, Jean-Pierre Melville, and Mario Bava. Mercier is so breathtakingly, stunningly beautiful here that it literally pulled me out of the film at several junctures. I froze the frame on the disc machine and 1) booked a flight to France on Expedia; 2) rehearsed the lie I would tell my wife about a “work thing” that I “had to go to” in “ugh, Paris” this month; 3) came to the soul-crushing realization that a glamorous international star like Mercier would want nothing to do with a washed-up, overweight English teacher who, even in his salad days, was nowhere near her league; 4) consoled myself with the fact that our never meeting somehow rendered our passionate love affair timeless and immortal, infused with an ethereal quality that, despite the vast ocean separating us, was surely deeply sensed by Michèle beneath the spangled black velvet of many a Paris night; and 5) pressed “play” on the remote and continued to watch the film. This sequence of events was actually repeated several times during my viewing of the film. 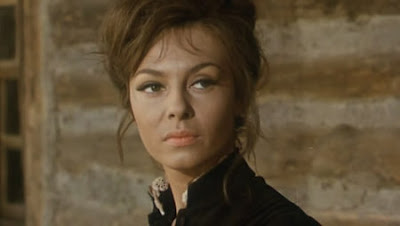 The majority of Cemetery Without Crosses illustrates the dichotomy between contemplated violence and actual violence. Hossein’s characters are conflicted by their basic morality and the utter immorality of the actions they ponder (and ponder). These scenes are portrayed using Leone trademarks like close-ups of grim faces or eyes and accompanied by very dramatic music. Eventually, all the characters choose violence, but not without long, long deliberation. This does have the effect, I came to see, of making the resulting violence seem more sudden and jarring. In truth, I found the film miserably/painfully slow (and wondered why the film had such a strange title, which seemed to have nothing to do with the film’s actual plot) until the final third, which contains some iconic western imagery and some very effective violence. The entire movie seems satisfied to be effectively Leone-ish. 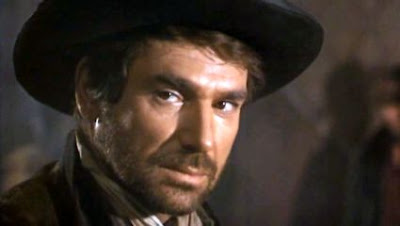 This dichotomy at the heart of the film is mirrored in the score, which is wildly erratic, jumping back and forth between overproduced, operatic superhero music and low-key, acoustic strings. Near the end of the film, a main character mounts his horse and, as he rides, the music rises to fever pitch and we expect the character to don a crude Superman a cape and to fly into the air. It’s that crazy.

Here, listen for yourselves, babies:


As a public service to you, the reader, I present the lyrics to this song, so that you can, if you wish, sing along. Do it in your bedroom, office, or kitchen right now—sing loud! Practice singing this several times—I want all of my readers to join in a worldwide sing-along TODAY at 10:00am CST—Sing, babies, sing!

“I seek the man who killed my friend,
and when we meet my life may end.
My life depends upon my gun,
and my gun spells hope in the land
where the rope and the colt are king

I swore a vow on my dying breath
to ride a trail that ends in death,
and death could strike with a frightening jolt
of a lightning bolt in the land
where the rope and the colt are king

But oh my darling, if I should die,
there's not a soul who will ever know
that I loved you so—was the reason why

The days are dust and the nights are black,
but oh my darling if I get back
I'll trade my gun for a wedding ring,
and I'll turn my hand to the land
where the rope and the colt are king.”

I want to hear you all! Sing it like you mean it, you magnificent sons of bitches!

Cemetery Without Crosses is now available in a nifty Arrow Video 2K restoration from Amazon.com!