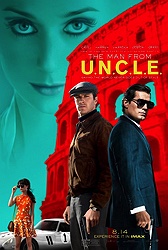 I don’t have strong feelings either way for Guy Ritchie’s latest, The Man from U.N.C.L.E. It’s an OK movie. I was entertained while I was watching it despite the pacing being a bit too slow during certain periods of the movie, particularly the first 45 minutes. The biggest issue with The Man from U.N.C.L.E. is that it is a generic spy movie in a year when its competitors are better in comparison. This movie doesn’t have the playfulness/anything can happened quality of Kingsman: The Secret Service or the amazing action sequences and star chemistry of Mission: Impossible: Rogue Nation. By the time Spectre is released, I doubt anyone will be talking about The Man from U.N.C.L.E. It just sort of sits there as a movie. 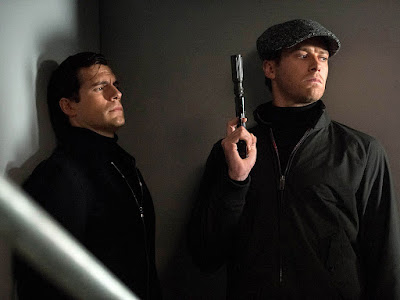 The plot in brief: Set in the early 1960s during the Cold War, CIA agent Napoleon Solo (Henry Cavill) and KGB operative Ilya Kuryakin (Armie Hammer) team up against a group of Nazis and fanatics who have nuclear weapons. Joining them on their mission is the daughter of a nuclear scientist (Alicia Vikander), who may be working with the bad guys.

I’m coming to this one as someone who’s never seen a single episode of the television series. I saw it with my parents and my dad was a fan of the show and he hated this movie, so take that for what you will. As a novice to this material (and I’m thinking this movie is made more for someone with no history with the property since the filmmakers chose to make this an origin story), it’s easy to understand the appeal. The conceit of an American spy and a Russian spy begrudgingly teaming up during the Cold War has the potential for both exciting action and engaging humor. However, I don’t think Guy Ritchie succeeds in either regard. When The Man from U.N.C.L.E. stops for an action set-piece it’s just sort of OK – neither exciting nor boring. You sit there and watch it and it’s over but again it doesn’t raise your pulse like any number of action sequences from the latest M:I. And while the movie often goes for humor, the cast is not very adept at the comedic elements. With different casting it might be a different story. 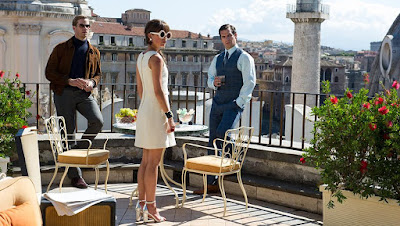 I’m not a hater of the three leads of The Man from U.N.C.L.E. Henry Cavill is a serviceable actor but he is not an engaging lead for a movie. Neither is Armie Hammer, whose charisma seems to have evaporated after his great performance in The Social Network. Coming off best is Alicia Vikander, but it’s mostly because she’s pretty and gets to wear sexy ‘60s outfits. The performance is (like her co-stars) fine but brings little heat. With these three paired up for the majority of the runtime, we get a somewhat flat movie. Hugh Grant co-stars but it’s almost as if the filmmakers don’t know he’s Hugh Grant and they give him very little (or funny) to do. This was a bummer because I am a fan of the actor. Additionally, this is a movie that screams for a great villain and doesn’t even come close. They get an A grade for the dress-up-party aspect of their role but a D for their acting villainy. As a result, we have heroes that are meh and villains that are uninteresting going head-to-head in a generic plot.

Every once in a while though there’d be a good scene and that would save me from thinking the movie was a total dog. I liked when Vikander is dancing around in a hotel room before getting into a knock-down fight with Hammer, I liked Cavill eating in a truck while he watched Hammer in a high-speed boat chase and a torture scene mid-way through the movie is suspenseful and well-handled. There’s just enough that’s good in The Man from U.N.C.L.E. where I would go back to revisit these characters should there be a sequel (which looks like it will not happen based on the box office results thus far). This first entry is largely table setting and I’m curious to see where the series can go from here. I also appreciated that writer-director Guy Ritchie calms down and shoots the action sequences in a clean and somewhat elegant fashion. There’s none of that speed ramping and slow-motion stuff that permeated his Sherlock Holmes movies. Thank G-d for that! 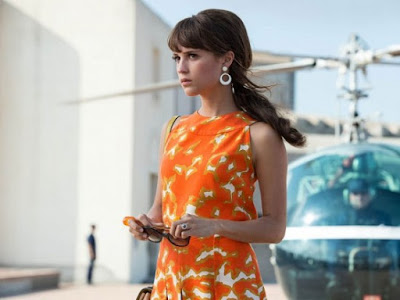 The seeds for a good movie are here in this telling of The Man from U.N.C.L.E., but as a whole the movie is somewhat underwhelming. It’s a beautiful looking movie with great location work and pleasing cinematography (from John Mathieson, who has shot many of Ridley Scott’s movies) and a fun score (from Daniel Pemberton) but the story is garbage and the performances are not charismatic enough to carry the dead weight. The filmmakers clearly intended to make a spy romp and in that they minimally succeed. While not a total wash, this is the case of a movie that’s more about marketing an existing intellectual property than telling an engaging story with charismatic actors stepping into the roles of iconic characters. There are many worse movies out right now than The Man from U.N.C.L.E., but there are also better ones (The End of the Tour, The Gift, Mission: Impossible: Rogue Nation etc.) so I suggest seeing those first before spending your time on something middle of the road.
Posted by Patrick Bromley at 12:00 PM