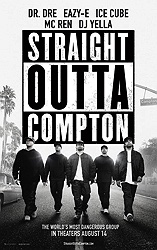 The experience of watching Straight Outta Compton, getting caught up in its energy and bravado, is thrilling. This is one of the most entertaining movies I’ve seen all summer and really, at the end of the day, a celebration of the artists whose story it’s telling – specifically NWA’s Eazy E, Dr. Dre and Ice Cube. It strays into hero worship at times, too. Under that lens the movie works. Really works. These three artists were monumentally influential in rap, transitioning the genre from party time jams (LL Cool J, Run DMC) and into dark territory, specifically gangsta rap. In the opinion of this writer, it was the high water mark of the genre – ambitious artists, flawless beats and amazing production. It just sounds good to me. I have so much fondness for the music of this genre, the time period and its artists. It’s the type of music that makes me go “ooh that’s gooooooood” in my head when I listen to it. The lyrics not so much, and that’s how I’d like to approach the movie Straight Outta Compton. It’s like most NWA songs for me – I love the way it sounds but I have problems with some of the things it says. 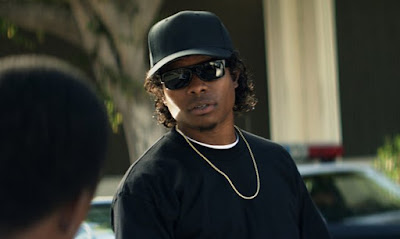 To say the movie walks around allegations surrounding NWA’s music (the misogyny and prejudice) would be fair. This is not a warts-and-all biopic. It was co-produced by some surviving members of the group and they’re very careful of their images in the movie. But it’s not a total whitewash. There are some thorns evident. Dr. Dre comes off the most saintly, but Ice Cube’s criticism for being possibly anti-Semitic is there. Easy E’s carelessness with money and women is there. Is it to the movie’s detriment that it’s not more upfront about the more negative aspects of NWA’s art and attitudes? Maybe, but maybe not. Straight Outta Compton would not necessarily be a better movie just for having all of their indiscretions on the screen.

To the movie’s credit, it effectively explores what was going on at that moment in history for young black men in California, including constant police harassment which mirrors (sadly) our current events of late in places like Ferguson, Missouri and elsewhere. The anger at the surface during the first half of the movie is as relevant as ever. The Straight Outta Compton we have here is a sprawling rap epic, a 147-minute (no good movie is too long) journey into the genre from the late 1980s to mid-1990s that charts the music and the culture of its time very well. In that way, it’s almost like NWA is Forrest Gump – the center of focus for a bigger story about what’s going on in a genre as opposed to America as a whole with Gump. This is also a really good movie about how shitty the music business is to be a part of – full of crooks and hangers-on. 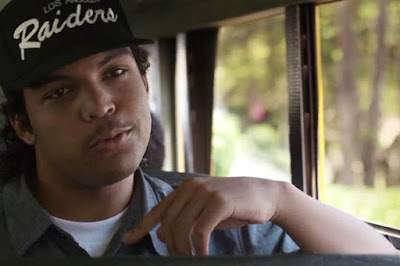 Everyone involved in Straight Outta Compton brings it. It’s like when a rapper knows he has a great rhyme (like “time” and “crime”) and steps up to the mic. The performances from an ensemble cast work across the board, turning icons into real personalities. O’Shea Jackson Jr. (the son of Ice Cube) plays his father and he nails his depiction of the rapper turned actor. In fact, O’Shea Jackson Jr. is so much like Ice Cube I’m convinced it’s really just Ice Cube and they did that de-aging Michael Douglas shit from Ant-Man again. It’s a great performance, although I don’t know where the young actor can go from here except maybe re-imagining Ride Along or something. Corey Hawkins does a solid job as Dr. Dre (who comes across in the movie as being all about the music and little about the bullshit – i.e. business and gangster lifestyle). Paul Giamatti is his usual solid self, although I feel like I’ve seen him play the exact same character just recently in Love & Mercy. The two best performances in the movie come from Jason Mitchell as Eazy-E and R. Marco Taylor as Suge Knight, the Death Row Records mogul and devil personified. Any scene with either of these two actors really soars. 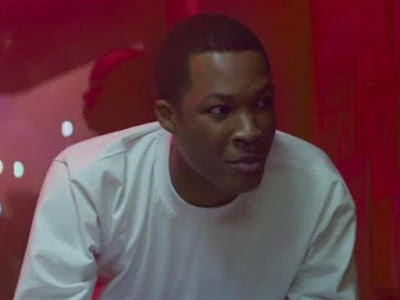 Straight Outta Compton was directed by F. Gary Gray, whose career has mostly consisted of director-for-hire work such as Be Cool and The Italian Job remake. He’s had his ups (Friday, The Negotiator) and downs (Law Abiding Citizen, A Man Apart) and I’d certainly classify Straight Outta Compton as one of the best movies he’s made even if he didn’t crack the music biopic jinx of “and then this happened, etc.” Gray has a real feel for the material and the energy he infuses into the movie is infectious. The movie works primarily as a history lesson on the beginnings of gangsta rap (just before the East Coast-West Coast war) so for fans of this genre of music, seeing this movie is essential. All others may not need to see it but if you do, you’re in for a stylish, engaging and rollicking movie with outstanding music. I can’t wait to see it again.
Posted by Patrick Bromley at 5:00 AM