One of my favorite movies of the year so far.

Love & Mercy is a very good movie. I was not expecting to get as caught up in it as I did, being just a casual fan of The Beach Boys and less of a fan than that of actor Paul Dano. And yet thanks to exceptional acting, solid direction from Bill Pohlad (producer of 12 Years a Slave, Brokeback Mountain, Into the Wild and The Tree of Life) and a strong script from Oren Moverman (the excellent The Messenger, I’m Not There, Rampart) and Michael A. Lerner, Love & Mercy really moved me. I greatly admire the movie’s approach in simply being an interesting story well-told.

The story is not told in sequence, but rather unconventionally in a parallel structure covering the 1960s with a young Brian Wilson played by Paul Dano and in the 1980s with John Cusack taking over the role of The Beach Boys' front man. The approach works to the movie’s benefit (unlike other recent biopics that do the same like Get On Up, which seemed told out of sequence for no real reason) as especially the Cusack sequences (where Wilson is a shell of his former self due to illness and mistreatment) might be too despairing to be told all in one chunk. Better to see some of Wilson’s high points mixed in with the lows. 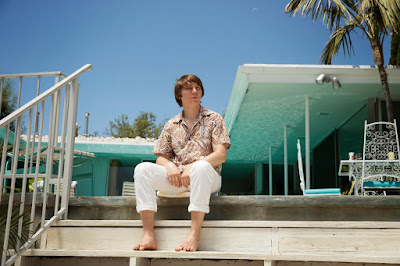 And some of those high points are magical, like the studio sessions between Wilson and the studio outfit known as The Wrecking Crew. The sequences in studio where they collaborate and shape the Pet Sounds album (among other tracks) are the best scenes in the movie – vibrant, exciting and believable in how artists can come together to collaborate and create great music. Sequences of patching a song together often feel false in rock movies, but here it’s done just about as well as I can recall ever seeing it. I love that in contrast to most rock biopics where the artist is portrayed as a great live act, this one posits that Wilson is more a genius in the studio more than on stage. Dano is terrific in these sequences, loose and yet in control.

Director Bill Pohlad does a good job of getting out of the way of his actors, knowing that this is a movie that will sink or swim on its performances. Everyone here is pretty excellent, which came as a surprise to me. I am coming around on Paul Dano. I used to think he was a screechy over-actor and scene hog that looked like a Whole Foods had a baby but ever since he got the shit kicked out of him in Prisoners (aka The Passion of the Dano) I don’t feel like picking on him anymore. He’s really good here and makes you forget the actor and just think of him as Brian Wilson. John Cusack gives a sensitive and vulnerable performance as well. It’s some of his best work, especially of late. Paul Giamatti really gets under your skin (in a good way) as the reprehensible Dr. Landy and Jake Abel has some stellar scenes as Mike Love, a member of The Beach Boys and Brian Wilson’s most vocal critic inside the band, always wanting them to be more commercial and less out on the edge. But the real MVP for me in this movie is Elizabeth Banks. She’s sensational and it’s the best work she’s done thus far on screen. She has the difficult task of playing a normal woman caught up in the drama of Brian Wilson’s life and she makes her character kind, strong and warm. It’s great work. 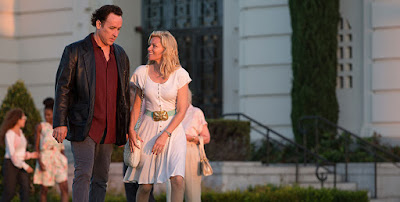 I have some things that bugged me about the movie, but not enough to sway me away from recommending it. The first is I didn’t feel like I knew everything I wanted to know about Brian Wilson at the end of the movie. It skips over the 1970s and his period where he merely laid in bed for three years (following one of his brother's deaths), instead leaving that sequence to the imagination. But it’s important and provides connective tissue between the 1960s and 1980s Wilson, so I would have preferred they left at least some of that era in there. The best rock biopics (like Control, about Joy Division’s Ian Curtis) do such a good job that they can make you almost feel like the performer, but Love & Mercy doesn’t reach that peak level.

Second is not really the movie’s fault, but just the sheer fact that you can’t do much with a rock biopic to make it feel fresh and original. It’s a limited genre. Rock biopics are rarely transcendent for me because they only follow one of two arcs: 1) the musician’s rise to fame and fall from grace or 2) the musician’s rise to fame, fall or struggle and comeback, be it in music or in life. Usually a romance is in there somewhere or an addiction or ailment, which is portrayed as partly responsible for the artist’s genius. Is it a coincidence that the vast majority of rock biopics follow one of these two threads? Or is it lesser filmmaking? I’m not sure. In any event, Love & Mercy feels like a traditional biopic, albeit one that is terrifically made.

Despite being conventional, on the whole I am a big fan of Love & Mercy. It’s one of those all too rare intelligent movies for adults telling an interesting story in an interesting way. The music, of course, is terrific and lends the movie a melancholy, shaken personality. It’s really impressive how well they fold it into the narrative, enhancing certain scenes all the more. But most importantly it effectively tells the arc of Brian Wilson’s life from someone who was unprepared to battle his demons but came out the other side after going through hell. Like its subject, this was a movie I felt like protecting just as much as supporting. Love & Mercy engages your sentiment as well as your head and what more could you really ask for out of the often lazy rock biopic genre?

Note: The last scene is beautiful and kind of perfect; however,l the dramatic moment is somewhat undercut by those all too familiar biopic end cards telling you what happened to everyone. I hate it when movies do that. Do the filmmakers think we really wouldn’t just look up what happened to everyone after we got home?
Posted by Patrick Bromley at 12:00 PM