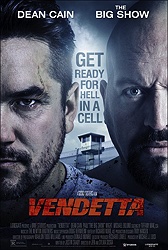 The more movies they make, the less I feel like I know who the Soska sisters are as filmmakers.

After their scrappy indie debut Dead Hooker in a Trunk and the messy but incredibly confident and well-realized American Mary, it really seemed like Canadian sisters Jen and Sylvia Soska were going to be some of the most exciting new voices in genre filmmaking. But after making two movies for WWE studios -- the lackluster sequel See No Evil 2 and now the prison action film Vendetta -- their idiosyncrasies seem to be vanishing. There is less of "them" in their movies these days, and while that might make their work more commercially viable it's disappointing as a fan of their early promise.

Not that these newer movies are bad. They aren't. See No Evil 2 was, in many ways, an improvement over the original -- deliberate, cool-headed and sometimes genuinely surprising. Vendetta is even better. Though hardly much more than a typical DTV actioner on its face, the movie has a willingness to go darker and nastier than most others of its stock. It's hardly a new classic, but it did win me over by the time it ended. 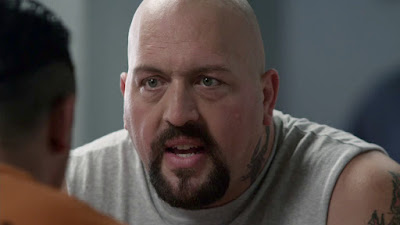 Dean Cain (that's right) plays Mason, a cop who busts criminal Victor Lord (played by 7' wrestler Paul Wight, aka The Big Show) only to have Lord exact revenge by murdering Mason's wife. To settle the score, Mason has himself deliberately imprisoned alongside Lord where he is beaten, tortured and subject to the whims of a corrupt warden (Michael Eklund). It all leads to a violent and massive showdown between the two with the fate of the entire prison hanging in the balance.

The inside of a prison is a common setting for action movies. Stallone has gone to prison (Tango & Cash, Lock Up). Schwarzenegger has gone with him (Escape Plan). Van Damme has gone to jail a couple of times (Death Warrant, In Hell), as has Seagal (Half Past Dead, Maximum Conviction). Not much about Vendetta distinguishes itself from the number of other prison action movies or the current crop to DTV action filling Redboxes across the country: it has the washed-out digital photography, the generic locations (here it's Canada instead of Eastern Europe for a change) and a pro wrestler in the cast. While the Soskas are either unwilling or unable to infuse the movie with any of their personal style, they do at least ensure that it's got plenty of personality. That's what makes Vendetta stand out. 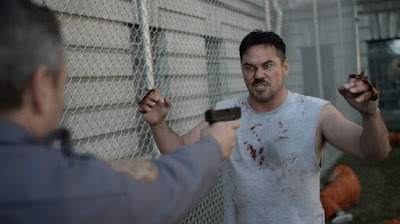 Though he leans towards the generic, Dean Cain acquits himself well. There's a bit of stunt casting in the decision to have him play Mason; he's the guy who first came to our attention stealing Brenda Walsh's heart in Paris. He spent a few seasons on TV playing the nicest, safest incarnation of Superman the character has ever known. He's spent decades showing up in Lifetime family movies about talking dogs that save Christmas or something. Though he has become the favorite celebrity guest of Fox News in recent years, Dean Cain is most closely associated with the aw-shucks nice guy image he's been steadily building since the 1990s -- and in Vendetta, he gets to tear it all down. One of the best things about the movie is that it actively plays against the trope of the cop who goes to some dark places as a means to a justifiable end, only to come back from the brink once he's achieved his goals. There's no blurring of the line for Mason; he marches right the fuck over it into pure darkness. He's not the hero who lets the bad guys take each other out, or who won't step in to help if he sees one about to fall off a cliff. He's the hero who straight up picks guys up and throws them off the cliff. He becomes a homicidal psychotic -- The Punisher if he was incarcerated -- and there's no attempt at any point in Vendetta to soften him up.

WWE superstar Wight cuts such an imposing figure that it's a shame he doesn't actually register more as the heaviest in a film full of heavies. Don't get me wrong, he's a fine actor -- pretty good, actually -- but it so rarely feels like his insane size is much of a factor that he fails to be any scarier than the hundreds of other violent inmates with whom Mason has to contend. While I don't think it's necessarily what the Soskas (nor the screenplay by Justin Shady) intended, it does lead to one of the movie's happiest accidents: by the time we arrive at the climactic showdown between Mason and Lord amidst a full-scale prison riot, Mason is the much scarier of the two. Vendetta is actually about the transformation of a good man into a monster. 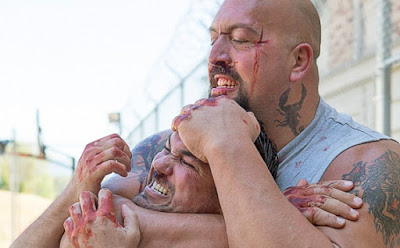 I like all this stuff, and I like just how much nasty, violent action is packed into Vendetta. It looks and feels like a lot of other DTV action movies but subverts the formula in some cool ways. But that's also part of its problem -- it looks and feels like other DTV action movies when I'm hoping for something different from the Soskas. Maybe it's not fair to hold them to a higher standard when they've made what is a pretty good little action movie. Maybe I should be applauding this accomplishment instead of adding a "Yeah, but..." Except, you know, yeah, but...when they made a film as original and daring as American Mary it's hard to sit back and watch them settle for being for-hire directors of WWE Studios' latest offering. These movies are fine, but I don't want "fine" for the Soskas. I miss the daring, the dark beauty, the fucked-upness of American Mary. I miss their voice. Vendetta is solid, but it's missing a voice.
Posted by Patrick Bromley at 4:00 PM