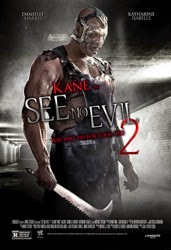 I wish I could say it was worth the wait.

When I first heard that WWE studios had hired Jen and Sylvia Soska -- aka the "Twisted Twins" -- to direct the sequel to the 2006 slasher See No Evil, I was genuinely stoked. It's not because I'm a huge fan of the first movie. I'm not. It's because I desperately wanted to see what it would look like to see the Soskas direct a for-hire studio movie. I liked the rough edges and can-do spirit of their 2009 debut Dead Hooker in a Trunk (shot for only $2,500) and thought they took a huge leap forward with their follow-up, 2012's American Mary, a darkly unique character study that unfortunately threw up its hands in the third act. With more resources and the opportunity to bring their indie sensibilities to a studio project, I was looking forward to their take on See No Evil 2.

Unfortunately, it would appear that the studio system or this specific project bled out what was interesting about the Soskas, because See No Evil 2 is almost as generic as every other DTV horror film. 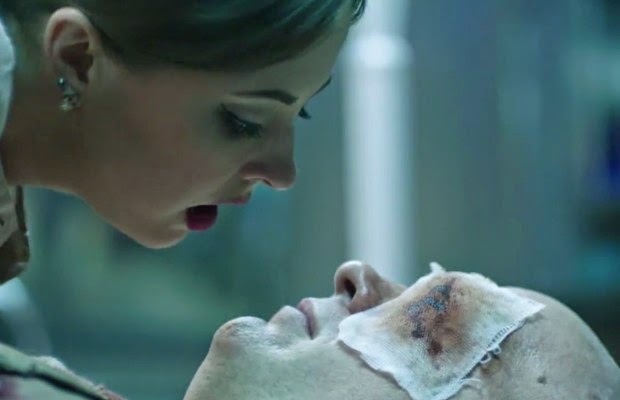 The dead bodies of the victims of hulking murderer Jacob Goodnight (WWE wrestler Kane, billed here as Glenn "Kane" Jacobs) are being delivered to the city morgue, where birthday girl Amy (Danielle Harris) is working the overnight shift alongside Seth (Kaj-Erik Erikson), the nice guy who's too shy to tell her that he likes her. Not content to let Amy spend her birthday among a bunch of newly-dead bodies, her friends show up to throw her an impromptu party, including party girl Tamara (Katherine Isabelle) and Amy's overly-protective brother Will (Greyston Holt). Before you can say "let's have sex in the morgue," Jacob Goodnight has woken up and started killing everyone. I guess he wasn't so dead after all.

See No Evil 2 takes a page from 1981's Halloween II in that it takes place immediately in the aftermath of the first film in a single sterile setting, here a morgue instead of a hospital. While the movie does the best it can with what it has (unfortunately one of the things it has is a bad script), this was the film that finally bummed me out about the state of indie horror -- and with the backing of WWE studios, this isn't really even an "indie." Seeing the Soskas have to spin an entire feature out of one location and fewer than 10 actors total, I finally got fed up. This isn't the first contemporary horror movie to do it and it won't be the last. But why? Horror is big right now. There are horror films that gross over $100 million at the box office. There are horror TV shows that are shattering records for viewership. Why are the budgets and resources of almost every horror movie being slashed to the bone? Maybe it doesn't matter here. Maybe this was limited by the budget, but was only ever intended to be small and claustrophobic. The movie is certainly more of an '80s throwback than its predecessor, only it's lacking in invention. Nothing that happens in the movie is particularly creative, and while I don't watch horror movies just for the "kills," they can sometimes be the lone bright spot when executed well in an otherwise by-the-numbers slasher like this. Knowing the Soskas' flair for the extreme (and even hearing them talk the movie up in recent months), I was expecting some really out-there stuff to happen. Instead, some people get choked or stabbed, sometimes not even on camera. Again, it all feels generic. Safe. That's the last thing I expected.

I would say I liked See No Evil 2 better than the original, but as someone who doesn't care a whole lot for the original that might not be saying much. There are brief glimpses of the movie this could have been; I like the Soska's cameo during their onscreen directing credit, and there's a really good scene in which Harris has to ride in an elevator alone with the body of Jacob Goodnight. The directors have carried over some of the same cool, clinical style they used for American Mary, and it works to a point; rather than the overheated, everyone-is-a-swearing-screaming-asshole approach of the first movie, here Jacob Goodnight is the one anarchic, destructive force against a backdrop of quiet stillness. The cast is obviously an improvement, too. Danielle Harris is a welcome presence in any horror movie, and while she doesn't have much to do here, at least we like her. I found myself caring about her and Seth from the outset, which is more than I could say for any of the miserable assholes who bickered and shouted their way through the first See No Evil. Katherine Isabelle livens up any moment she's on screen, but she seems to be in a different movie than everyone else -- she's mostly playing her part for comedy, which is at odds with the otherwise totally humorless tone. I wish more of the movie was like the one she's acting in, but because it's not she tends to stand out. Still, at least something is standing out.

This is WWE Studios' third horror movie of the year, and it ranks firmly between the pretty decent Oculus and the fucking horrible Leprechaun: Origins. It's a totally average horror movie, classier than what WWE used to put out but never really surpassing its DTV origins. Its averageness only becomes a liability because of the talent involved. This group should have made something more unique. Better. Here's hoping that their first experience inside the studio system has taught the Soskas a few lessons and they can use what they've learned to work in that world on their next film (Painkiller Jane) but still get back to being themselves. They're better than this.