The Overlook: Harry in Your Pocket

No, this week’s column is not about a medical condition.

“Harry never holds,” we’re told about a thousand times during Harry in Your Pocket. But does he hold up? A mostly-unremembered programmer released in 1973, Harry in Your Pocket played a lot on television in the late ‘70s. It is a good film—not a great film—and with better crime films available from that year (The Sting, Paper Moon, Mean Streets) I get why it’s been overlooked. Yet I still feel it is worth seeing for its glimpse into our burnt orange-and-harvest gold 1970s past and for the top-notch Kino Lorber transfer on their newly released Blu-ray disc. 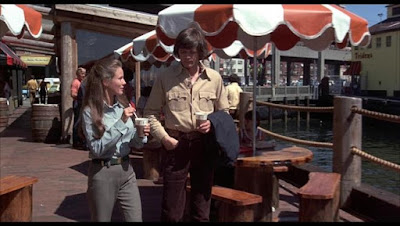 The plot in brief: Ray Haulihan (Michael Sarrazin) is a rookie pickpocket who hangs around bus stations nipping tourists’ watches. After meeting cute with Sandy Coletto (Trish Van Devere), the two fall in together. Acting on a tip from his fence, Ray and Sandy meet with Casey (Walter Pidgeon) who recruits them both for a pickpocket ring. The leader of the gang is the titular Harry (James Coburn), a classy womanizer who is also an amazing professional pickpocket. The four get better and better at what they do, and the film follows them around the Pacific Northwest as they ply their trade.

Tensions soon mount. Casey is a drug addict. Ray is incompetent. Harry has eyes for Sandy. Casey starts training Ray behind Harry’s back. Could Sandy be interested in Harry? Will Ray be the odd man out? Where the hell is my wallet? 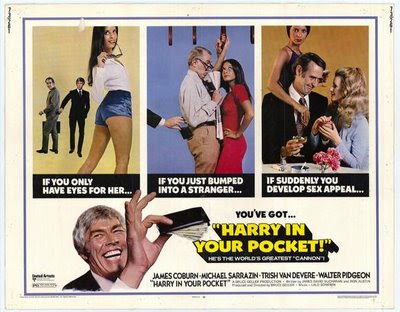 Based on the evidence in the film, everything in the ’70s was made of wood—including the lead performance by Michael Sarrazin, who here brings the same blank-faced, slightly stoned demeanor he also brought to his roles in They Shoot Horses Don’t They, Sometimes a Great Notion, and For Pete’s Sake. And I’m not joking about the wood; rich mahogany and knotty pine are everywhere in Harry in Your Pocket, a film that virtually screams “WHAT AN UGLY DECADE THE SEVENTIES WAS, ALSO HERE IS A MACRAME OWL.” It’s no wonder that neon colors became so popular in the 1980s! The art direction on Harry in Your Pocket uses dark brown and orange as the primary color palette—it’s just an ugly choice. The lovely Trish Van Devere is playing a woman who looks 32 but we later learn is only 23; the art direction alone adds nine years.

Besides Sarrazin’s Sleepy Time Tea performance, Harry in Your Pocket is yet another film where the lead performances seem to be at odds with each other—as if every actor is really in a different movie. Sarrazin thinks he is the lead but is easily upstaged by Coburn and Pidgeon. Coburn phones it in. Pidgeon just seems tired. Trish Van Devere clearly thinks the film is about her. Odd. 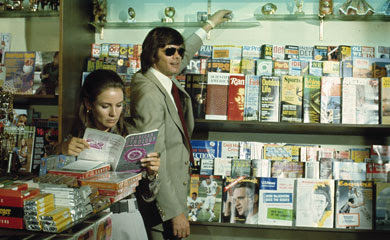 Watching Harry in Your Pocket again after all these years led me to the question of whether James Coburn was a one trick pony; he seemed to specialize in playing the smirking, alpha-male SOB. I tried to think of a part where he wasn’t that guy: The Magnificent Seven? Smirking SOB! In Like Flint? Smirking SOB! The President’s Analyst? Smirking SOB! The Last of Shelia? Smirking SOB! Affliction, his final film, which garnered him an Oscar? Smirking (sad, older, alcoholic) SOB—Got it!

Understand, I love all of these performances; it just never quite dawned on me before what a limited range Coburn had.

The film really shines in scenes that recreate Harry’s pickpocketing schemes. Watching the film, we learn the argot of this enterprise: Poke, Kick, Cannon, Stall, Steer, and Dip (not to be confused with the 5 Ds of Dodgeball: Dodge, Duck, Dip, Dive, and Dodge.) As I’ve written before, audiences love to see a guy who is good at his job, and Harry and his troop of miscreants become very good indeed. 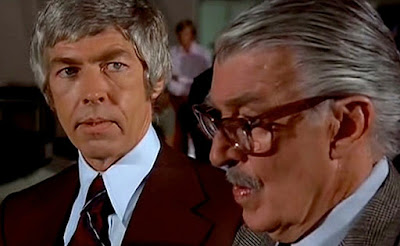 Unfortunately, while Harry in Your Pocket clearly delights in showing us the inner workings of illegality, the movie is crippled by the time period in which it was made; in 1970s films, crime cannot pay. The clarity and dexterity of the heist sequences suggest otherwise—the film only ever comes alive when its principals are stealing. There is one sequence in particular, filmed by director Bruce Geller in slow motion, where the machinations of the four-member pickpocket crew involve runaway fruit on a sloping street; the scene artfully demonstrates the gang’s split-second timing.

Kino’s transfer here is nothing short of magnificent; it is one of the best 1970s color transfers I have ever seen. I am not suggesting the film should be watched for its scenery, but the Pacific Northwest here looks awfully good, and if dark brown and bright orange happen to be your favorite colors, then this film is a video feast. 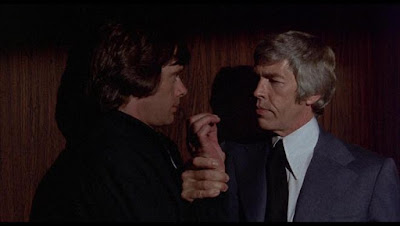 Mild Spoiler Alert: My biggest quibble with the film is its ending, which in trying to be ambiguous, negates itself. During a big score at a horse show, Harry makes a decision—or does he?—that seems out of character. Is he making a sacrifice for the team, or does he have another motive? Has Harry changed his priorities, or his opinions about Ray and Sandy, or is this is a sign of something else? In typical ’70s programmer fashion, the movie just ENDS so we never really know. The filmmakers are clearly going for ambiguity here, but the result is a Rorschach inkblot of an ending where I feel the material cries out for clarity.

Harry in Your Pocket is available in a beautiful transfer from Kino Lorber. Steal twelve bucks from a stranger and buy it now.