Robert Redford doesn’t want you to see this movie.

Until recently, I’d never heard of the movie Little Fauss and Big Halsy. Allow me to digress: a couple of years ago, I got Columbia’s gigantic box set of Johnny Cash albums for Christmas. The mammoth release contains 63 discs of Cash’s country/pop/Americana goodness, and if you’ve been reading the stuff I contribute here for any length of time, you know that I have this anal obsession (I should rephrase that) to tackle things in chronological order. That means I can’t very easily watch Live and Let Die without my crazy OCD insisting that I start with Dr. No and work up to the movie I wanted to watch in the first place. It’s a problem. It’s getting better, but it’s still a thing. So I tackled all those Johnny Cash albums chronologically and—understandably--got bogged down around disc 23. Not long ago, I dug the box back out and picked back up where I had left off, so it was only then that I hit disc 26, which is Little Fauss and Big Halsy: The Original Soundtrack Recording. I’d never heard of the movie that this soundtrack accompanied, but the disc clearly states that the music performed by Johnny Cash also featured the involvement of Carl “Blue Suede Shoes” Perkins and Bob Dylan. I had to find this movie. 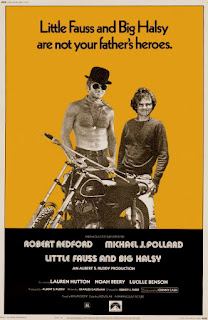 A little digging turned up just a few meager facts. Little Fauss and Big Halsy is a motorcycle film made in 1970 by director Sidney J. Furie, a man who will probably best be remembered as the guy behind the Iron Eagle series from the 1980s and for helming the disappointing Superman IV: The Quest for Peace. During the 1960s, he had been an exploitation director responsible for a few kitschy horror films and a western, and I have no doubt that Little Fauss and Big Halsy was conceived to exploit the success of the 1969’s biker odyssey Easy Rider. It stars Robert Redford as Big Halsy and the diminutive Michael J. Pollard as Little Fauss.

Robert Redford chose this role following the success of Butch Cassidy and the Sundance Kid because he reportedly wanted something grimy to counter his polished appearance in the smash western. And grimy it is: Redford is a real sleaze in this role as a drifting biker who travels from race to race and doesn’t allow himself to get tangled up in anything or with anyone. He uses women, manipulates men, steals and lies to put food in his mouth, and sleeps wherever and with whomever that he finds himself each night. It’s unclear if anything he tells anyone in the movie is ever the actual truth or simply what he wants them to hear so he can twist them to his own purpose. It’s a real departure for Redford, and I’ve never seen the actor play such a dirty character. This is not the elder statesman that Redford would become; this is a real piece of trash with few redeemable qualities, if any. Thus, this role is very interesting. 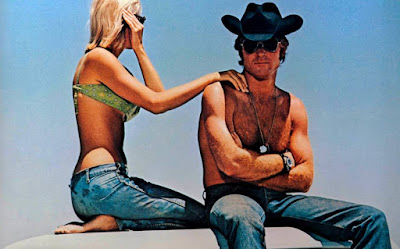 Michael J. Pollard is a young, impressionable motorcyclist who ends up being caught in the wake of Redford’s charisma and comes along for at least part of the ride. They’re drifting, wandering from town to town, with no particular destination in mind. In many ways, Little Fauss and Big Halsy is a spiritual kin to Two Lane Blacktop, a similar film about two guys at the dawn of the 1970s dealing with the restlessness and disillusionment that followed the hippie idealism of the late 1960s. Somehow, Little Fauss and Big Halsy manages to be even grimier and meaner. Pollard and Redford apparently didn’t get along or enjoy working together, creating a tense shoot. Helping things a bit is the addition of Lauren Hutton, who joins the two men around the middle of the movie as a hippie trying to come clean from drugs and do something more meaningful with her future. She sees Redford’s Halsy for what he is, a liar and a user, but she still somehow falls for him in spite of herself.

It’s not hard to understand why these people are drawn to him. Redford has a charisma and a free spirit (or the illusion of one) in the movie that you can’t help but gravitate toward. I have to be honest: I’ve never been a fan of Robert Redford. I’ve always found him to be kind of dull and squeaky-clean, and therefore mostly uninteresting. That’s not at all who he is in this movie, and I can’t help but wonder what would have happened if he’d continued to make more films like this one.

Another one of the few facts I uncovered comes from a biography of the actor written in 2011 by Feeney Callan, who revealed that Redford had been a big fan of the script (written by Charles Eastman) and thought it was the best one he’d been a part of bringing to the screen up till then. By 1976, however, Redford told director Alan J. Pakula on the set of All the President’s Men that he had come to view it as a blemish on his otherwise respectable body of work and was unhappy that the film was being shown on television. According to the biography, Pakula responded to his actor that “it was the last unself-conscious revelation of the actor’s real life edge.” Pakula was right; there’s an unvarnished realism to the film—the kind of unapologetic honesty that movies excelled at during the 1970s and abandoned in favor of ‘80s gloss—that seems right at home for Redford. He was a motorcycle enthusiast, after all, and it was during a bike trip from California to Colorado that Redford discovered the land in Utah that he would soon purchase and make home to his Sundance Resort and the eventual Sundance Film Festival. It’s easy to believe that Halsy, even though he’s a total a-hole, is a facet of Redford himself. The best performances draw from reality. 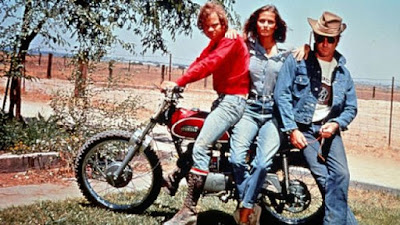 Little Fauss and Big Halsy has been nearly impossible to see for years and years, which is probably why I’d never even heard of it. It’s never been on DVD and certainly not on Blu-ray, and I can’t ascertain if it was ever officially released on VHS at any point, either. I’ve researched and found a few PAL copies outside the U.S., but I don’t think it was ever commercially available in America…ever. This is where rumors began that Robert Redford had killed the movie after the disappointing theatrical run and was preventing it from being released on the consumer or rental markets because it embarrassed him. I have doubts about this for several reasons. I mean, I don’t think any studio would let the opinion of one of their stars keep them from making money, no matter how powerful that star is. I also don’t think Redford would try to suppress something just because he didn’t like it. I imagine the real reason for its disappearing into Paramount’s vaults probably lies with the music rights and royalties. The movie didn’t make much money and the market for this kind of movie is incredibly small, so I suspect there was a lack of willingness to shell out more money for music rights that the movie probably couldn’t recoup. Besides, Redford’s son cites the film as his favorite of his father’s work. If the music royalties really are the culprit, I should note that the soundtrack is fantastic. Johnny Cash’s trademark “Boom-Chicka-Boom” sound makes the perfect accompaniment to this film and keeps it from getting too dull and introverted. It elevates the film, and provides a little levity when things are feeling grim.

Even though the movie isn’t available on disc or even video tape, it has thankfully been added to most of the major pay-to-stream services, including Amazon, iTunes, and Wal-Mart’s VUDU service. You can rent the film in standard definition, but at VUDU, you can actually purchase it in 1080p high definition. Unfortunately, pretty much all the reviews on those streaming sites are taken from the initial release of the movie in 1970, and they aren’t kind at all. I kind of hate that the sites are showing reviews from 1970 with the date “2013” next to them (when the film was made available again), because they didn’t have the perspective that we are afforded today. The common criticisms are that the film is morally superior, dull, and loses itself in the latter half of the movie. I disagree with the first two and begrudgingly agree with the third, but it doesn’t spoil the movie for me in any way. Looking at it now, 45 years after it was first released, offers a glimpse into the disillusionment of a generation, a rare and unrepeated performance from Robert Redford that he later came to regret, and a soundtrack by one of America’s greatest recording artists at the tail end of his creative powers. It’s not a great film, but it’s pretty good, and pretty good’s not bad. If you’re a fan of 1970s filmmaking, location filming in California’s expansive deserts, motorcycles, Robert Redford, Johnny Cash, or the infinite promise of the open road, you could do a lot worse than give an hour and thirty-eight minutes to Little Fauss and Big Halsy.
Posted by Patrick Bromley at 12:00 PM