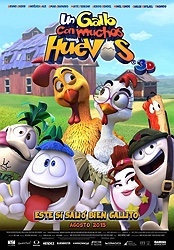 A couple of weeks ago, Patrick and I were attending the Bruce Campbell Horror Film Festival and we saw a huge display for a 3-D animated kids movie from Mexico about a bunch of farm animals called Un Gallo con Muchos Huevos. We were both sort of surprised it was receiving a wide release. When I saw that the movie (which is clearly for children and about a rooster named Toto who has to save the family farm by competing in a boxing match) is rated PG-13 for suggestive content and was also playing in one of the four cavernous “big theaters in the middle” at our local AMC Theaters megaplex, I knew I had to go and see what the fuss was about. I expected to be there alone. To my surprise, there were about 50 people there for a 10am show on Sunday morning.

Another reason I wanted to see this thing for myself is because, to my amazement, Un Gallo con Muchos Huevos is a hit this weekend. The movie finished in 7th place at the box office despite being in only 395 theaters and has the best per-screen average this weekend of all movies in wide and limited release. That’s loco. 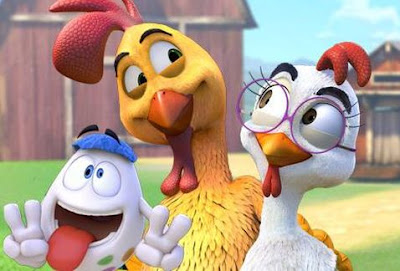 The movie moves at a steady clip and is colorful. The animation ranges from cheap-looking to sometimes quite beautiful. It’s weird. But that’s about all that’s good about this oddity from the people at Lionsgate. Well, that and one line of dialogue that made me laugh really loudly, which is when an egg is insulted by a rooster and then tells the rooster (who is in training and looking for his signature move) “Your signature punch can be your tactlessness!” So to round out the column I give you a couple of lists:

Here’s a top 10 list of how hacky this movie is:

1. There’s a character modeled after Marlon Brando as Vito Corleone that is referred to as the “Godfather Egg.”

2. Another character is named “Say” and there’s a labored version of “Who’s on First?” done with her name.

3. The movie stops cold for a rap battle ala 8 Mile between LL Cool Duck and Snoop Duck. I’m not joking.

4. There are “comic relief” possums that want to eat the lead characters but they never do and instead just get their tails run over repeatedly.

5. Toto gets into a fight with a character named Jean Claude Van Duck. Other characters include Rooster Norris and Rooster Babosa.

6. There’s a Rocky-style training montage but the Bill Conti score has been “improved” by adding in maracas.

7. The movie employs slow-motion and speed ramping in its action sequences like Shrek did in 2000.

8. One character says to another “What the duck are you doing?”

9. Every overweight female character (there are three) have exaggeratedly bouncy breasts.

10. The movie closes on a dance party to the song “Don’t Stop the Party” by Pitbull. The song “Bad to the Bone” is also featured in the movie. 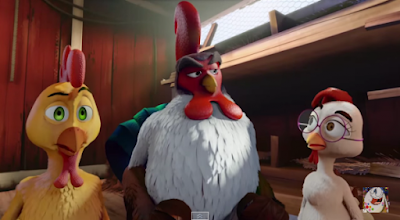 The movie is also obsessed with sex and other bodily functions including:

1. An egg that gets scared and farts confetti out of its egg ass.

2. A grandma and a mailman sort of dancing around the idea of having sex with each other.

3. One character saying another is “begging for it” because she took off her hen glasses thus is wearing nothing.

4. There’s a hen that sings a song about how you can do anything to her and she turns out to be a hen fatale by the film’s end. #FowlNoir

5. And my favorite: The boxing trainer egg says he’ll train Toto if one of the female eggs gives him a massage with a happy ending. I didn’t believe I heard it correctly the first time but then they repeat the joke and the fucking trainer egg winks at the audience. Do eggs have dicks?
Posted by Patrick Bromley at 5:00 AM