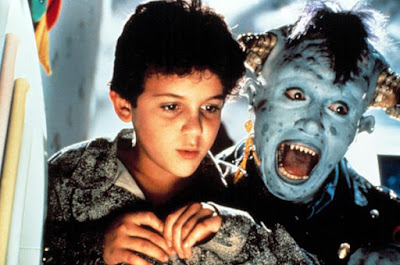 I am trying my absolute best to not watch horror films in these last few weeks before Scary Movie Month. With my go-to being horror any time, any day, any place, I have to admit I am struggling. So I forced myself to close my eyes to any horror category and bring you this instead: Terrifying Children's Movies! ...Or movies that terrified me as a child. I refuse to believe that this qualifies as cheating.

Side note: As I have already written of my terror and hate of E.T., I have left it out of this piece. However, know that it is a silent contender for most horrifying of all.

When I was a kid, and I mean a wee lil thing, my favourite book was Ottie and the Star. To quickly sum it up, Ottie the Otter wants to catch a star so he can make a wish, and mistakenly swims down in search of a starfish of which he had caught a glimpse. Cute, right? That is until he runs across a shark. Not a drawn-for-a-children's-book shark, a giant toothy I'll-eat-your-face-off-if-you-get-too-close-to-this-book shark. Yep. And my two and three year old self asked my mom repeatedly to re-read me this story night after night. So it makes sense (to me!) that some of my favourite children's movies featured wonderfully horrific scenes. 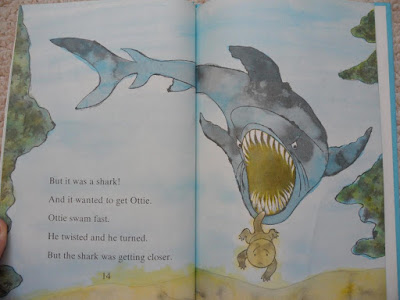 When I think back to my first selection, immediately a fiery bull, creepy talking skeleton and terrifying caged monsters come to mind. It had been about two and a half decades since my last viewing and my memory still had it categorized in the (unintentionally?) scary children's movies section of my brain. Directed by Jules Bass and Arthur Rankin Jr. and based on the novel of the same name by Peter S. Beagle, the story, in short, is of a unicorn (voiced by Mia Farrow) who believes she is the last of her species and goes in search of her kind. Along the way she comes across Schmendrick the Magician (Alan Arkin), who turns her into a human to aid her escape from the fiery bull. The two “humans” eventually come across an evil king (Christopher Lee), who has captured and sent the entire unicorn race to spend eternity in the ocean. 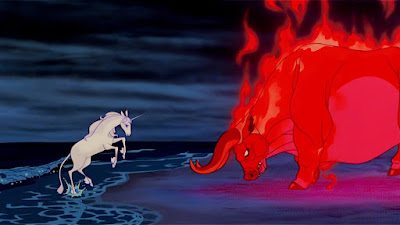 My memory of the film was one thing, but the reality of this re-visit is something entirely different. The themes which were partly lost on my young self now scream out: friendship, greed, pains of love, and mortality. As the author of the novel himself adapted the story to film, it stays very true to itself, and while the simple themes are made understandable for young viewers (appearances are deceiving, it is not what you see on the outside that defines a person), it is very cleverly written to keep an older audience thoroughly engaged. The music (performed by America) is yet another powerfully moving aspect that I found to accentuate every moment and emotion, and as the best music accompaniment to a film is capable of doing, draws you completely into their world. 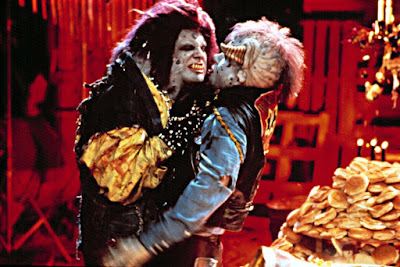 This is one movie I grew up with and must have watched it at least 50 to 60 times. Again, having not seen it for at least twenty years, I was happy to find that I remembered most of it beat for beat. Well, at least the “scary” parts! It is a fantasy/comedy (starring Fred Savage) that tells the tale of what really goes on under a kid's bed when the lights go out. Enter Howie Mandel as Maurice, the monster under the bed. To the best of my recollections, the first glimpse of the monster is a shadowy vision with sharp teeth, backed by ominous music and then his eyes are popping out and everything is funny. Along with the scene where Maurice turns his hand into a vicious dog that “eats” the homework, they are the two stand-out scary moments that have stuck with me over the years. That being said, I did not love the film as much as an adult as I did as a child. For one, I believe Monsters Inc. did a much better job with the concept and is in a category all of it's own. As has been mentioned on this site time and again, the movies we grew up loving we can't help but have a fondness for as adults, but this one just doesn't hold the magic for me anymore. Maybe I should give it another chance, though. I almost feel guilty for half turning my back on it!

The Witches, on the other hand, while being a favourite book and movie of mine as a kid, has only grown better in my opinion and is quite easily one of my all-time favourite movies as an adult. Based on the book The Witches by one of the best children's authors to ever pen a tale, Roald Dahl (The Fantastic Mr. Fox, Charlie and the Chocolate Factory), I was first introduced to this story when it was read to us by our second grade teacher Monsieur LaFleche (yes yes, I was a good ole French Immersion child). With it having such a huge part in my childhood, I am amazed that so many people in my life are unaware of its existence. Directed by Nicolas Roeg and featuring Jim Henson's creativity in his last project before his passing, they managed to bring to life the vivid characters and spirit of Dahl's imagination in a way that few others have ever been able to accomplish. My only criticism is that they strayed from Dahl's original ending to create a “happy ending” for film audiences, which he is on record as having despised. 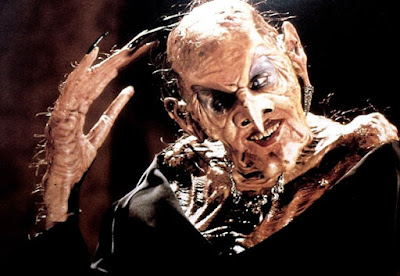 In brief, an orphaned boy, Luke (Jasen Fisher), is being raised by his grandmother (Mai Zetterling), who, due to an incident as a child herself, feels it of utmost importance to educate her grandson on how to spot a witch in everyday life. (A woman with square-toed shoes? Witches have no use for them as they have no toes! Scratching her scalp? Witches are bald so they wear wigs! Turning her nose away/plugging her nose in disgust? Witches find children to be the most foul-smelling things in existence!) While vacationing in England they stay at a hotel that is host to an annual convention for the “Royal Society for the Prevention of Cruelty to Children,” which just so happens to be a gathering of witches from around England. The Grand High Witch (in a very Nazi Commandant-esque performance by Angelica Houston), the most grotesque and dangerous of all witches, has a plan to turn all of England's children into mice, which can then be easily killed. BAM. Children's story. HAHA! BUT IT WORKS! And a 100% rating on Rotten Tomatoes tells me that it didn't just work for me...

The darkness and scary elements are what drew me back to these movies time and again. In comparison to what is made available to children these days, any hint of darkness or sense of evil appears to be filtered and sanitized until they are left shielded from even a glimpse of a nightmare. The original tale of Cinderella, for example, tells the tale of the stepmother who cut off with a knife the toes of her daughter and the heel of her other daughter in order to fit their feet to the shoe. But the blood flowed over the sides so we knew it didn't fit, that it was made to fit. Today, we get the grumpy girl who tries to squeeze her foot in and the shoes comically pops off. The stories are merely shadows of their originals and as more and more things are sanitized and filtered to protect the young minds of tomorrow, the horrors of the “real world” become that much more incomprehensible. These movies gave us, (what I feel) a healthy understanding of fear. 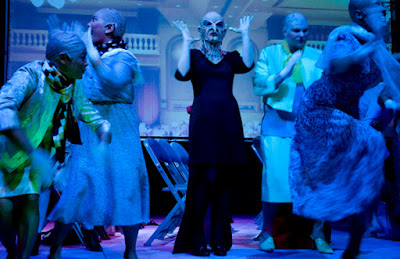 I don't think any of us turned out so bad from watching children being turned into mice by terrifying witches and having their tales chopped off. Hmmm... I am the one who will choose a blood-filled horror over a stupid rom-com any day though. Maybe it's just me?
Posted by Patrick Bromley at 12:00 PM