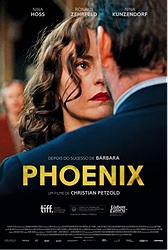 The latest from German director Christian Petzold is a small, tightly wound story that on the surface involves a mistaken identity in post-World War II Germany, but twists itself into something different.

Longtime Petzold collaborator Nina Hoss plays Nelly, who we meet as she’s being transported by her friend, Lene, from a concentration camp to Berlin for treatment. Nelly’s face has been severely damaged from her imprisonment, and she requires immediate reconstructive surgery, which leaves her appearance radically altered. 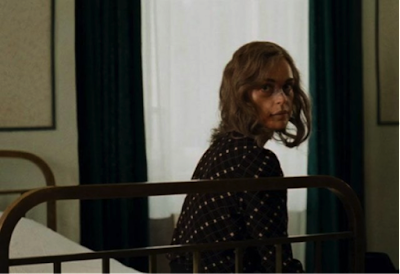 Nelly slowly recuperates, and begins to wonder about her loved ones, especially about her husband Johnny. She goes out on her own at night, sifting amongst the many displaced people who’ve found themselves in Berlin after the war. She succeeds in finding him, busing tables at a jazz club called PHOENIX, but he does not recognize her. In an even stranger turn of events, he later seeks her out and asks her to impersonate his dead wife so he can acquire the rights to her family’s wealth, offering to split the money with her. In this way, Nelly is forced to impersonate herself with the man she loves but who believes her to be dead. Does she refuse the offer, and instead impress upon him the truth of her identity? Or does she play along, hoping that by biding time Johnny eventually will come to recognize her?

Hoss plays Nelly with great depth and nuance, bringing the physically and emotionally shattered prisoner alive with a shuffling, uneasy physicality, punctuated by her large, startled eyes. As Nelly steadies herself into her new face and her new life, her back is a little straighter, her eyes clearer, and her words are more sure. The interplay between her and Johnny (Ronald Zehrfeld) are my favorite parts in the movie, as multiple levels of meaning appear in their conversations: Nelly leaving breadcrumbs for Johnny to follow, Johnny hinting at something like recognition but stopping short of conceding anything. The characters’ interactions grow more tense, but they are not completely sure why the tension grows, which makes it compelling to watch. 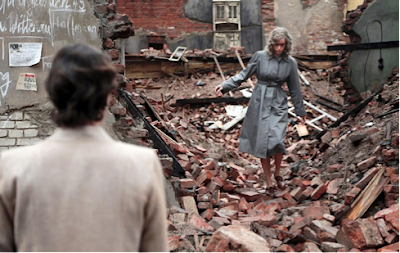 Nelly’s choice to stay and hold onto her old life is a representation of what many survivors of the war experienced. Although few had a dramatic a transformation as Nelly did in her plastic surgery, the unfamiliarity she experiences with her own body and new life parallels the many levels of alienation that survivors faced as they tried to return to normal. Their homes were gone from the cities that were now destroyed to point of anonymity, and their families were dead or disappeared. Many decided to stay and re-start their lives in the rubble, while others decided to leave and start fresh where the memory of trauma was less. Wouldn’t finishing the war with one’s life be enough of a victory? It definitely is, but we see that the task of survival is more complicated once the war ended. Petzold avoids the pitfalls of a Holocaust/World War II movie becoming too large and unwieldly by focusing it on the specific struggle of one individual. Nelly’s choice may seem a little naïve or overly nostalgic, but it never feels that way because we understand the difficulty of completely cutting ties from every part of life.

The camera moves with a deliberate pace, never calling attention to itself, but subtly, gracefully setting up the frame, which is draped with the spare color palette of war torn Germany. Although clearly a story set in the real world, Petzold adds some flourishes with his lighting and his placement of objects, hinting at the heightened reality that exists between the truth and the lie in which Nelly finds herself. 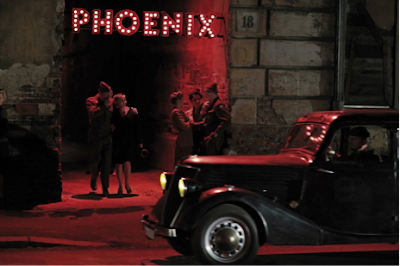 Ultimately, the story resolves in what I consider to be the best ending for a movie I’ve seen this year. It’s been discussed often on this site how a strong ending can really make the opinion for a movie, and that’s the case here. It’s not that the movie was uneven throughout and the strong ending sticks the landing; it’s more the case that the ending is the logical endpoint for all of the events that led up to it, and acts as a perfect endpoint for our narrative, although we can imagine the story moving on with its own momentum.

Phoenix opened in 2014 on festival circuit and in its native Germany; it opened in July 2015 in the U.S and is still in limited release.
Posted by Patrick Bromley at 5:00 AM