By this time next week it will be #ScaryMovieMonth. Watch these (mostly) non-scary movies while you can. 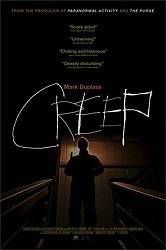 Adam Riske: Creep (2015, dir. Patrick Brice) I had been hearing good things about Creep for a few weeks (since it sprouted up on Netflix) and I'm glad I took the time to watch Patrick Brice (The Overnight) and Mark Duplass' latest. It's scary, very suspenseful and also darkly funny in a nervous laughter kind of way. I don't want to say more because the element of surprise added to my appreciation of the movie so I'll just say that I would definitely recommend you check this one out for Scary Movie Month. 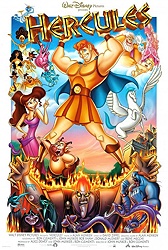 Adam Thas: Hercules (1997 dir. Ron Clements, John Musker) There isn’t much I can say about Hercules that Heath Holland hasn’t already said in his column about underrated Disney movies (seriously, it’s a good write up and you should read it) but I will add on to it. Hercules is part of that late '90s Disney run where they were trying desperately to stay relevant even though computer animation was starting to sneak it’s way into popularity. The story and characters are fine, but what really makes Hercules stand out to me was the shifting in artistic style from some of the previous features, specifically the way that Disney changed the way some of the characters are drawn with funky “twirls” for ears and skinnier and more jagged noses. Hercules also uses color differently, with softer, more colorful lines and warmer backgrounds in different scenes. It’s not the artistic masterpiece that Sleeping Beauty is, but if you’re a fan of 2-D animation it’s an interesting experiment from the world's most famous animation studio. 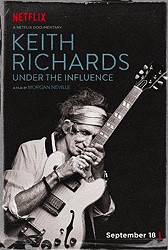 Heath Holland: Keith Richards: Under the Influence (2015, dir. Morgan Neville) I know I just recommended a music documentary last week, but Keith Richards: Under the Influence dropped last Friday to coincide with the release of Keef's third solo album, and I LOVE IT. The film is directed by Morgan Neville, the behind 20 Feet From Stardom, an Academy-Award-winning documentary about background singers, and it's the only film I can think of that highlights Keith Richards himself rather than the band he's been a part of for over fifty years. It's partly a chronicle of the making of his new album, but it's also partly a look back at the long road behind, with visits to the deep south and Chicago and reflections on how those places contributed to who he is now. It's not pretentious, but it's definitely reverential and sometimes poignant; Keith Richards knows that he should have been dead a long time ago, and the film finds him thankful for every new day. I don't mean to be morbid, but I'm glad this documentary exists while he's still here. After all, he's 71, and this could be the only documentary of its kind that's made with his full involvement and cooperation, so it deserves some attention. There's a respect to the tone that sets this apart from other music documentaries; Morgan Neville seems awed by the alchemy of musical creation, and he's able to convey that in a way I really appreciate. I read an interview this week with the director where he talks about the movies that shaped him and the synergy between film and music, and I'm becoming more and more a fan of his work and the affection he has for both. Under the Influence offers the rare opportunity to see one of rock and roll's true legends (I don't use the term lightly) explaining to the best of his ability who he is and what drives him. Did I mention that I love it? 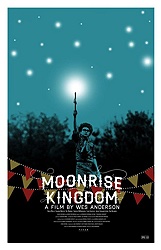 JB: Moonrise Kingdom (2012, dir. Wes Anderson) Certainly one of the most “Wes Anderson-y” of Wes Anderson’s recent films, there is so much to admire and enjoy in the story of Sam (Jared Gilman) and Suzy (Kara Hayward) and their pre-teen, star-crossed love. The film is exceptionally sweet. Anderson directs his usual rogue’s gallery of interesting actors here, including fixture Billy Murray, Bob Ballaban, Francis McDormand, Bruce Willis, Edward Norton, Jason Schwartzman, Harvey Keital, and Tilda Swinton. As with all of Anderson’s work, the use and choice of music is something special. I love how he makes such “spooky” use of Noyeh’s Flud and Benjamin Britton’s Guide to the Orchestra. On a personal note, a theatrical screening of Moonrise Kingdom was the first time anyone in a theater ever recognized my voice from the this podcast. My wife and I stayed through the closing credits, and the young man approached me and said, “Are you JB from F This Movie?” Be still my beating heart. 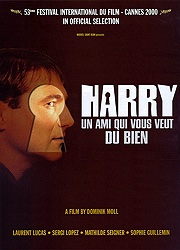 Patrick: With a Friend Like Harry (2000, dir. Dominik Moll) Here's a solid little dark comedy thriller that doesn't get talked about enough, including by me (I saw it in theaters 15 years ago and haven't thought about it a whole lot since). A couple runs into a guy that the husband knew in high school, who then begins encroaching on their lives in ways that are increasingly overbearing and sinister. So it's like You, Me & Dupree, but with more murder. And French. If that doesn't sell you, nothing will.
Posted by Patrick Bromley at 12:00 PM