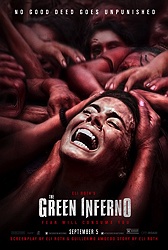 It wasn't worth the wait.

It has taken The Green Inferno, the fourth film from writer/director Eli Roth in 12 years, a long time to get to the screen. It was shot in 2012, premiered in 2013 and was slated for release in September of 2014. Financial difficulties with the distributor resulted in the film being pulled at the last minute, leaving the film's future totally uncertain. Roth went off and made another movie, Knock Knock, in the interim, which is now being released at about the same time that The Green Inferno is finally getting a theatrical and VOD release thanks to Blumhouse.

I have been looking forward to The Green Inferno for the last two years because I still want to believe in Eli Roth. He's a filmmaker who unapologetically loves horror and wants to celebrate it every chance he gets. He has chosen to make a real jungle cannibal film, a subgenre that has been dormant since the early '80s and, according to many sources (among them the excellent documentary Eaten Alive: The Rise and Fall of the Italian Cannibal Film), wasn't all that well respected to begin with. He does it because he loves these films; in one of The Green Inferno's nicer touches, Roth lists all of the cannibal films that inspired him in the closing credits.

But I was also pulling for him because I'm a fan of his first three movies in varying degrees. I guess it's descending order, because The Green Inferno is my least favorite film Roth has made. 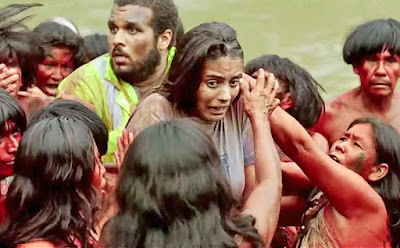 Lorenza Izzo (Mrs. Eli Roth) plays Justine, an idealistic young college student who begins to recognize the superficiality of her own life and is itching to make a difference. She's taken with Alejandro (Ariel Levy), a campus activist who talks Justine into accompanying a group into the Amazon jungle to stand in front of bulldozers and save the indigenous people. Once in South America, the group's plane crashes and strands them with a tribe of cannibals looking to chow down on some American food. Idealism: it's what's for dinner.

I would love to say that all of The Green Inferno's problems are those of tone. And the movie is a tonal disaster; Roth has always shown a penchant for mixing brutal violence with a kind of douchey fratboy humor, but in the past it has worked better because it was an extension of the characters he was writing. That balance is completely out of whack here, though, because the juvenile jokes are butting right up against the horror. There is a sequence -- it's the set piece of the film -- that is so gory and ugly and disturbing that it's genuinely unsettling and difficult to shake off. Moments later there is an extended joke about a character shitting, complete with farting sounds and exaggerated reactions from her friends (this despite the fact that they literally just watched one of their group ripped apart and devoured...but poop is just that gross, I guess). In another film, the moment might be another example of the horrible, dehumanizing experience these college kids are undergoing. In this one, it's just a poop joke. And it's a big part of what's wrong with The Green Inferno. 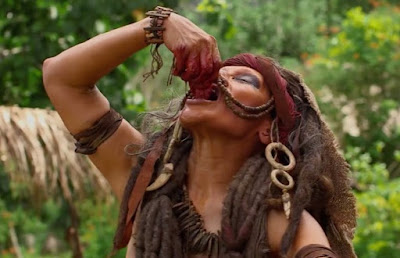 But the problems go beyond the tone, because it's not as though things were going great before that. There aren't any real characters here, just placeholders. The most we know about any of these people is that one of them is kind of a douche and one likes to smoke weed and one might be gay? This is not a novel problem for a horror movie to have, but it's exacerbated here because we spend a lot of time with these non-characters. Like, a lot. The movie takes a long time to get going. Like, a long time. It's a structure of which Eli Roth seems fond, as his films can often be bifurcated into setup/horror. But at least his previous efforts spent half their running time as goofy sex comedies -- it's not much, but it's something. The Green Inferno has no point of view and seemingly no goal for its first half beyond "get these kids to the jungle." On that, Roth and I are in agreement. When it takes the better part of an hour for that to happen, it's easy to get impatient.

Then the crazy violent stuff starts happening, and that's Eli Roth's wheelhouse. He clearly loves staging gore gags, and The Green Inferno affords him plenty of opportunity for that. His tonal problems resurface occasionally, meaning there are deaths during the plane crash that are staged for laughs when it ought to be harrowing and terrifying. The gags don't release the tension. They undermine it. The practical effects from KNB are incredible and once again demonstrate that it's almost impossible to get an NC-17 for violence, but because Roth can't ever commit to a tone he keeps breaking his own spell. The film has the potential to be great in its second half (enough to overlook the first) had it just pushed the relentless intensity and really become a waking nightmare. Instead, there are CGI ants and someone will die and then a character will start jerking off and it's all so goddamn annoying. 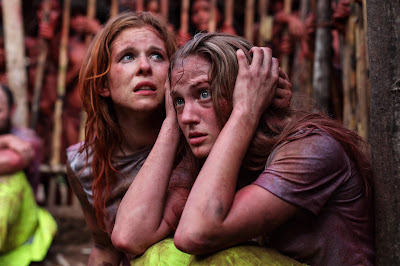 I'm so disappointed with The Green Inferno. As a commentary on misguided idealism, it fails. As a movie intended to scare us, it fails. As a comedy it fails. It is neither satirical nor a cautionary tale. It's not a movie without merit -- the effects, again, must be applauded (nasty as they are) and Roth deserves credit for shooting the film in a South American jungle that has supposedly never been visited by anyone but its native inhabitants. There will plenty of audiences who dig on the movie's wavelength -- who find the comedy funny or who are able to see the whole thing as one big goofy lark (I know this because that's how a lot of the audience with whom I saw the movie seemed to react). I'm not one of them. This is a film that keeps getting in its own way.