Off the Shelf: Mannequin Two: On the Move (Blu-ray) 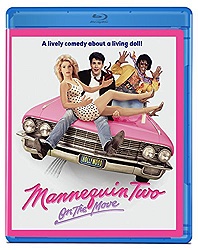 A lively comedy about a living doll!

The original Mannequin, released in 1987 and starring Andrew McCarthy as a department store worker who falls in love with a plastic dummy that turns into Kim Cattrall when no one is looking, is a really stupid movie. It's also kind of an ugly movie, too -- grossly misogynistic and packed with outdated stereotypes. Of course I have some amount of affection for it, as it was the first movie to play at the second run theater down the street from my house growing up (and though I wasn't allowed to see it because it was PG-13, the fact that there was now a theater in walking distance was a life-changing event) and because I saw it so many times on cable as a kid. I'm not proud of it.

The 1991 sequel Mannequin Two: On the Move seems to exist just to make the first film appear totally accomplished. One might think there was no real need to do a sequel to Mannequin, as it managed to tell the show story of a guy falling in love with a mannequin and left few, if any, open-ended questions. And yet because it was a decent-size hit when it was released, a follow-up film was the natural progression. Rather than trying to continue the story, though, someone working on the movie just decided "what if there's another guy and he falls in love with another mannequin?" because the only thing more plausible than a magical mannequin who comes to life and falls in love with a human man is the idea that it's a regular occurance. 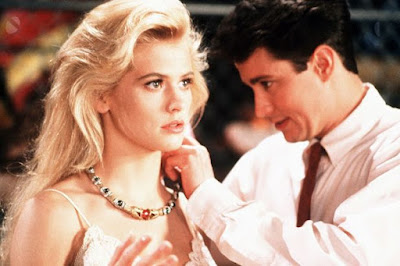 William Ragsdale plays Jason, hired on as an assistant window dresser at the Prince and Company department store. We learn in an extended prologue that he's the reincarnation of a prince whose love,  Jessie (Kristy Swanson), was turned into a wooden statue by an evil sorcerer (Terry Kiser). Flash forward hundreds of years: the Jessie statue, still intact and accounted for, is sent to Prince and Company for a window display and comes to life when Jason removes the necklace that is enchanting her. Recognizing him as her prince, she falls immediately in love with him and they start one of those magical mannequin/human romances we heard so much about in the '80s. Unfortunately, the evil sorcerer has also been reincarnated as Count Gunther Spretzel (also Kiser), who dispatches a group of German bodybuilder buffoons in pursuit of Jessie and her necklace.

Even for a film in which a guy falls in love with a mannequin -- make that the second movie in which a guy falls in love with a mannequin -- On the Move's plot is really stupid. That's too bad, because if this were just a straightforward romantic comedy starring William Ragsdale and Kristy Swanson, I would on board faster than you could say "Really? Them?" Instead, they are stranded in this Film That Should Never Have Been, directed with tacky artlessness by Stewart Raffill, the man also responsible for making Mac & Me. Ragsdale is his usual likable everyman self -- his career should have been bigger than it was -- but poor Kristy Swanson only gets to be a sweet, beautiful vacuum. Even her human character is given all the dimension of a department store dummy. 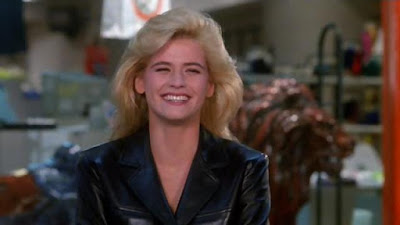 The only connection to the first movie -- besides the fact that the screenplay (credited to five writers...FIVE) recycles the same story beats -- is the reappearance of Mesach Taylor as Hollywood, the offensively flamboyant homosexual stereotype who was a window dresser in the first film and now has been promoted to...I'm not sure...head window dresser? At one point we see him choreographing what appears to be a full-scale Broadway number and I got very confused because most of the department stores I've been to in my life just sell stuff. Taylor randomly plays a gruff bouncer working the door of a nightclub at one point too, either because a) he wanted to demonstrate his "range" and avoid being stereotyped (a consideration he doesn't appear to have afforded his characters) or b) he was staking out his territory as the next Eddie Murphy. In this he was unsuccessful.

The movie is just not very good. And yet we live in a world now in which, thanks to boutique labels like Olive Films, one can now own Mannequin Two: On the Move (which appears on screen as just Mannequin: On the Move) in high definition. I am delighted about this. The movie has its fans. Every movie does, and they deserve to have the films they love in the best possible format in just the same way that I'm thankful when Phantom of the Paradise gets a Blu-ray release. We must not take these titles for granted, even when they're not for us.

Olive is also releasing the original Mannequin on Blu-ray for the first time, which is great news for all of the Mannequin completists. I suspect those are the people who will want to own Mannequin Two.

Buy Mannequin Two: On the Move from Olive Films here.