This early Christopher Guest film is great, but only around the edges.

There is a lot to like in Christopher Guest’s directorial debut, The Big Picture. It was made between This Is Spinal Tap, which Guest co-wrote, and Waiting For Guffman, which Guest conceived with Eugene Levy and directed. There is an earnestness in The Big Picture that is missing in Guest’s more fanciful work, though there is also a certain “film school” pretension that his later work lacks. Of course, this pretense could be a sly, meta in-joke, as one of the subjects of this film is, indeed, film school. 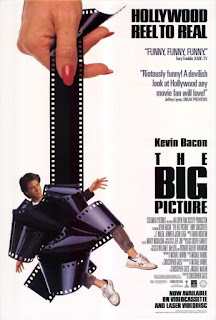 The Plot In Brief: National Film Institute student Nick Chapman wins the school’s top prize for student films, hurtling him headlong into the world of Hollywood. Odd film producer Allen Habel (J.T. Walsh) wants to green-light Nick’s first real film, but is asking for changes to the script. Man-child agent Neil Sussman (an uncredited and hilarious Martin Short) doesn’t want to bullshit Nick. Actress Gretchen (Teri Hatcher) really wants a part in Nick’s film. The compromises and temptations of starting his first feature threaten to derail Nick’s relationship with longtime girlfriend Susan (Emily Longstreth) and Nick’s friendship with cinematographer Emmet (Michael McKean). Will Nick ever get his life and career back on track?

The Big Picture features an inspired use of real L.A. locations much different than the four or five touristy spots usually trotted out for movies and TV. This is the only “Hollywood movie” that I can think of that doesn’t, at some point, show its characters grabbing a red-hot at the famous Pink’s. (I’ve theorized that Pink’s must supply free food to movies choosing to shoot there, much like cigarette companies used to pay to have their harmful products featured on television medical dramas.) There’s also no sign here of Randy’s Donuts, the famous shop near LAX with the gigantic donut on the roof. Instead, we get a selection of real and sometimes seedy locations that speaks more truthfully to the L.A. I have seen and smelled when visiting there. We get the beautiful old Spanish-style buildings of classic noir mixed with the unforgiving bright sun of city side streets. We get the sense that great poverty and great wealth reside here side by side, which underscores the film’s message about making it and not making it in Hollywood. 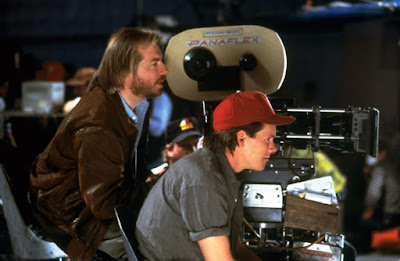 Martin Short’s extended cameo as Nick’s agent is the film’s comedic highlight. Though Short only has four scenes, the character he creates is so quirky, so specific, and so seemingly based on someone real, it’s a tour-de-force. He gives Neil Sussman the odd, unfocused, slightly cross-eyed stare of either a visionary or lunatic. I just finished reading Short’s autobiography, I Must Say, in which he writes about filming for The Big Picture and expresses regret that he followed the 1980s trend to go unbilled—he is so proud of his Neil Sussman character that he wishes that he’d asked for screen credit. 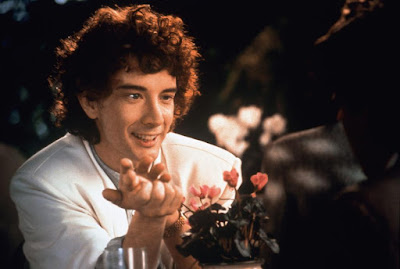 Another highlight: the extended sequence detailing how Nick’s script for a moody, romantic drama quickly becomes the teen sex romp Beach Nuts in the hands of clueless producers. Every one of Nick’s artistic decisions is questioned, threatened, or shot down: his original concept of shooting the film in black and white is scuttled when one of the junior producers tells Nick that modern movie projectors “can’t even show black and white anymore. They just can’t.”

If you like big-star cameos, babies, this film is full of them. The Big Picture features some lesser-known appearances by Gary Kroeger, Fran Drescher, Eddie Albert, Elliott Gould, June Lockhart, Stephen Collins, Roddy McDowall, Richard Belzer, and John Cleese. In one scene that takes place outside a movie theater, Jerry Maren, who was one of the original Munchkins from The Wizard of Oz, appears as an extra. Could Guest be trying to recreate the feeling that, when one is in L.A., one is only ever six or seven feet from celebrity?

The Big Picture also features what might as well be the greatest “lost” Spinal Tap track ever. At one point in the story, down-on-his-luck Nick agrees to shoot a music video for his friend’s band, Pez People. Though the band consists of actors, the song—“The Whites of Their Eyes”—was written and performed by Michael McKean and Christopher Guest, and sounds like a This is Spinal Tap outtake. 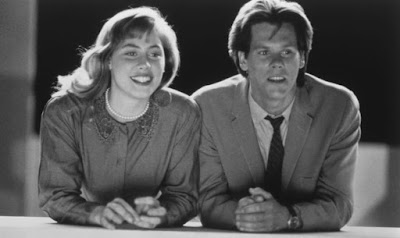 Unfortunately, there are just as many elements in The Big Picture that do not work. The love story at the movie’s center is not unique and seems to be recycled from dozens of other films. This makes me wonder, though: could director Guest by spoofing romantic comedies by serving up this generic stuff? The daydream-like genre parodies occasionally shoehorned into the narrative seem “by-the-book” and just not funny enough (though they add to the film’s sense of film-school pretension.) I also have a slight problem with Kevin Bacon as a leading man in this one. Like Brad Pitt, I think Bacon may do his best work in character parts, not in romantic leads.

FUNNY STORY: I read on IMDb that the film company rented a big mansion in the Hollywood Hills to use for location work and soon learned that Charles Bronson lived across the street. During the course of their three weeks there, the film company managed to somehow kill Bronson’s cat. Actually, that’s not really funny. I’m sorry I suggested that.
#RIPmrwhiskers 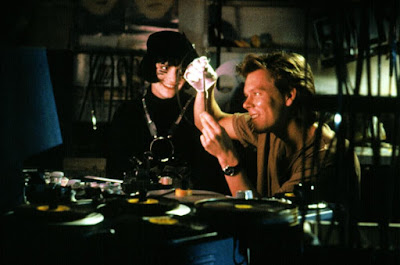 I wondered why the film’s copyright notice read 1988 while the film’s release was listed as 1989. Turns out that David Puttnam green-lighted The Big Picture just before his famous ouster as head of Columbia Pictures. The new regime at Columbia did not want to release the film at all because of the way it mercilessly mocks studio personnel. Columbia wound up giving it the scantiest possible theatrical release and then sent it straight to video. The irony could not be greater.

Perhaps Christopher Guest should have volunteered to re-name his picture Movie Nuts?

The Big Picture is now available on blu-ray disc from Mill Creek Entertainment.
Posted by Patrick Bromley at 5:00 AM