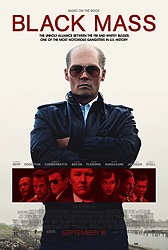 Black Mass, the third feature from director Scott Cooper, feels like an Air-Quote Movie. It is slick and totally competent and looks the part but is informed only by other movies. It's a whole bunch of wigs and makeup and production design, like a group of people playing dress up. The movie is perfectly well made. The cast is impressive and, to a person, does a good job. But Black Mass has nothing to offer that hasn't been served up by a dozen crime movies past. 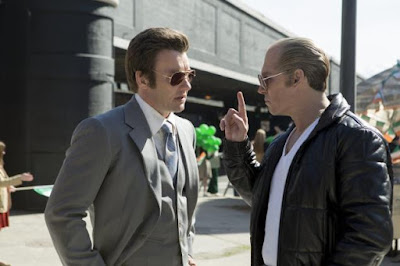 Johnny Depp dons a bald cap, some latex and piercing blue contact lenses to play James "Whitey" Bulger, the Boston crime lord who topped the FBI's Most Wanted list for years before disappearing in the '90s and finally being arrested in 2011. Leading the FBI investigation into Bulger is Special Agent John Connolly (Joel Edgerton), who forms an "alliance" and gets Bulger to inform on his competition in the Italian mafia in exchange for free reign to do whatever he wants in the city. As Connolly sinks further into his corrupt relationship with Bulger, his situation grows more and more desperate as he has to cover for the Winter Hill Gang and protect what's his.

Every single actor in Black Mass is recognizable and talented, from Bulger's crew made up of W. Earl Brown, Rory Cochrane and Jesse Plemons to the FBI agents tracking them (Kevin Bacon, Adam Scott, Corey Stoll) to Bulger's senator brother (Benedict Cumberbatch) to Bulger and Connolly's wives (Dakota Johnson and Julianne Nicholson, respectively). Cooper has stacked the deck in the film's favor. Masanobu Takayangi's photography has the right combination of slickness and grit for a period crime drama. Tom Holkenborg's (aka Junkie XL) score is effective without ever being bombastic. The editing works in that the scenes are put together well even though it's a two hour movie that feels like a four hour one. Everyone on the movie does good work. It just happens to be in the service of a movie that feels perfunctory when it should burn the screen. 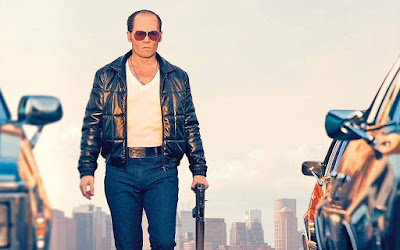 Most of the story surrounding the reception of Black Mass is the return of Johnny Depp to "real" acting, this despite the fact that it's yet another makeup-and-voice performance. It's an ok makeup-and-voice performance, somewhat less indulgent than some of the actor's more recent work, but Depp no longer disappears into roles as much as he disappears into the act of disappearing into roles. He doesn't try to make Bulger at all sympathetic, doubling down on making him a truly poisonous monster. This does give the film a sense of repetition, however, as we get scene after scene of Bulger making a threat and/or killing someone who might present a problem for him. He has hardly any dimension; we see that he cares about a few people early on, but those are lost to him and replaced by only more blackness. It's not as though any of this is layered into the character or that he's changed by any of these events. He's just an ugly person who grows uglier and also some bad stuff happens to him.

Joel Edgerton is much more interesting as John Connolly, primarily because he has an arc -- he gets to react to things, unlike Depp who is merely the thing to which others react. Connolly maintains the illusion throughout all of Black Mass that he's a good guy who's doing the right thing, telling the lie so long he stops being aware of the fact that it's a lie at all. It's there in the way his voice inflects up with every line delivery. Watching Edgerton grow more and more panicked as he tries to keep all his balls in the air and keep the Feds away from Bulger is the closest the movie comes to generating real human drama, and even though Connolly is portrayed as basically a piece of shit we can at least recognize him as being human. He's flawed and terrible, but human. 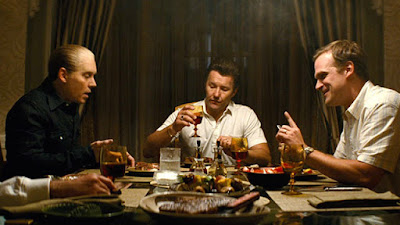 Humanity is a big part of what's lacking from Black Mass, as Scott Cooper shows little interest in connecting to the audience in any real way and a whole lot of interest in cribbing from other crime movies. Hardly any attempt is made to stage a sequence or frame a shot in a way that feels new or honest, only recycled from other similar works. It's not Cooper's fault that the period gangster genre is so well worn by now, but it's entirely his fault that Black Mass makes no attempt to distinguish itself from any of them. I'm happy to see that Warner Bros. is still making crime pictures targeted at adults, as it's the genre that helped make their reputation back in the '30s. But after 80 years and countless other films, I would hope that Black Mass would take greater care to stake out its own territory. Instead it's a well-made forgery. It's the American Hustle of gangster movies.
Posted by Patrick Bromley at 1:00 PM