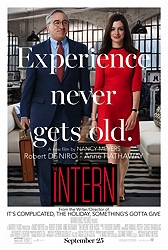 The Intern crashed through my wall of cynicism. It’s a thin wall.

A movie like The Intern is very easy to take shots at. I wanted to see it and I was still making fun of it. It’s as high-concept as it gets – a senior in life becomes an intern at a hip internet start-up – so much that the jokes write themselves. But the great thing about titan of lifestyle porn Nancy Meyers’ (What Women Want, Something’s Gotta Give) new movie is that she totally understands that and still makes a movie that works despite its cutesy, on-the-nose premise. If you’re looking for something with big surprises, this might not be for you. It’s formula filmmaking, professionally done. However, if you are looking for a movie so enjoyable that it wills you to leave the theater with a grin on your face, this might be up your alley. It was for me. I know it’s not a great movie, but I kind of love The Intern. I will watch it a lot on cable. It’s my Draft Day of 2015. 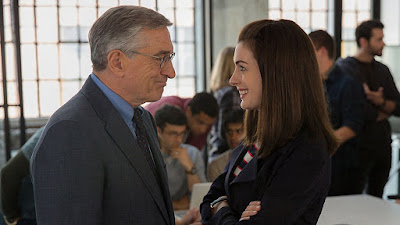 If I had to describe The Intern in one word, that word would be “charming.” This is maybe the most charming movie I’ve seen all year. The experience of watching it is like being mauled by the Snuggles Bear. The charm comes courtesy of great movie star performances by the two leads – Robert De Niro and Anne Hathaway. They really dive into their roles and give their characters rich inner lives. This is definitely the case where you feel like you’re watching two real people who have lives outside of the events of this movie. I grew to like them and really care about them. De Niro and Hathaway elevate what is actually a pretty good script and land a lot of laughs and smiles in the margins of their lines of dialogue. Their chemistry is great, especially in one scene (at a hotel, on a business trip) where the two share a heart to heart about relationships. It’s an amazing scene filled with laughs and touching honesty. This is not the kind of work that wins Oscars, but it’s almost more impressive than some of those kinds of performances because it reminds you of how integral the right actor can be to bringing stock material to life. When two lead performances are this good, the rest of the movie (especially their co-stars, who are all almost uniformly pleasant) glides on their work. This is old-school entertainment in the same vein as something you’d catch on a lark off Turner Classic Movies. 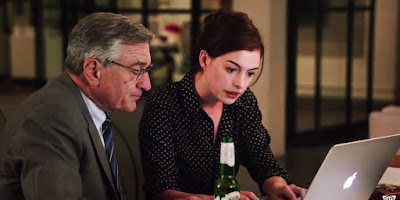 Before I continue on and possibly convince you that The Intern is one of my favorite movies of the year (it’s not), let me point out some of the things that didn’t quite work for me. First, it’s very gentrified and incubated from reality. Hardly anyone of non-white denomination seems to work at Hathaway’s company and that’s jarring and weird. Second, Rene Russo wants to bang Robert De Niro and the execution of that is clumsy. Russo’s supporting part as a masseuse who works at the company feels forced and their relationship is poorly developed. A scene of them talking and getting to know each other first might have made their attraction easier to comprehend. Third, the movie has one of the worst closing scenes I can remember. It’s such an un-cinematic shrug that I was kind of left in shock as the credit started to roll. Lastly, a character in this movie makes a decision near the end that is sort of depressing and one that I didn’t agree with. That doesn’t make it bad, exactly (it’s not the movie’s fault that a character does something I didn’t want it to), but it feels like a compromise and an act of defeat from someone we’ve gotten to know like. It’s also weird that the movie keeps saying what a ballbuster Anne Hathaway’s character is supposed to be because she seems totally nice and pleasant to work for. Then again, this is a movie where virtually everyone is a great person, so I guess she’s tough by comparison. 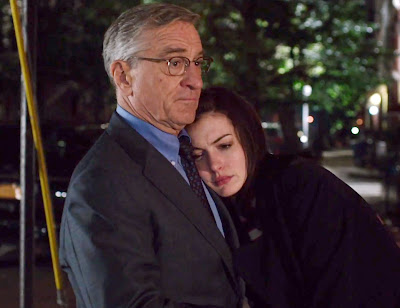 But almost none of those flaws matter to me. The Intern is so fun and frothy that it even made me look forward to going to work the next day. I love that. Think about all of the office comedies over the years and just about all of them portray working in an office as a soul-sucking enterprise. However, in this movie, being at work is refreshing and exciting; full of community, fun and inspiration. A lot of jobs are like that and I appreciated seeing one depicted on screen. Not all office employees are drones who are miserable at work. In the end, The Intern was simply a very enjoyable time at the movies and a reminder of just how good Robert De Niro (he’s fully engaged here and seeming to be having a lot of fun) and Anne Hathaway can be as actors and movie stars. It’s almost like these were two actors meant to be in a Nancy Meyers movie and the stars in the movie galaxy aligned and finally made it happen.
Posted by Patrick Bromley at 5:00 AM