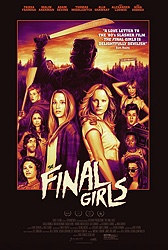 Yes, it sounds like that movie Final Girl that just came out two months ago and even stars the same actor (Alexander Ludwig), but The Final Girls is a better film and one worth seeing this Scary Movie Month.

The Final Girls, the new film from director Todd Strauss-Schulson (A Very Harold and Kumar Christmas), is the most "meta" horror movie since The Cabin in the Woods. That's a word that will no doubt be thrown around a lot in relation to this film, a fact I'm sure will grow tiresome for the filmmakers. All the same, it's a movie that goes out of its way to comment on the tropes a single horror subgenre -- in this case the '80s slasher film (as opposed to tackling all horror films, which is Cabin in the Woods' raison d'être) -- and instills what might otherwise be a thin postmodern exercise with a surprising amount of emotion. In fact, it's the emotional stuff that really works.

Taissa Farmiga (daughter sister of Vera) plays Max, a high school student whose actress mother (Malin Akerman) was tragically killed a few years earlier in a car accident. She is convinced by a friend to attend a revival screening of her mother's most famous film, a Friday the 13th-esque '80s slasher called Camp Bloodbath. At the screening, Max and her friends wind up trapped inside the actual film, where they're knowledge of the plot and the conventions of slashers come in handy and where Max comes face to face with her mother -- only now she's a movie character. Will they survive to the end credits? 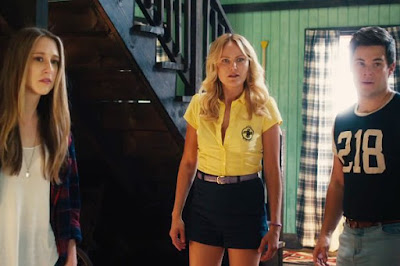 The Final Girls is to slasher films as Last Action Hero is to action, and while I recognize that the "characters interact with the movie" concept pre-dates Last Action Hero in films like The Purple Rose of Cairo and even Buster Keaton's Sherlock Jr., the comparison to Arnold Schwarzenegger's action comedy is still the most apt. The screenplay (by the writing team of M.A. Fortin and Joshua John Miller, child star of River's Edge and Near Dark) isn't really concerned with our relationship to art, but rather with "sending up" the slasher genre in only the broadest strokes. Unfortunately, it gets a lot of things wrong, whether it's the douchey character played by Adam DeVine or Warrant's "Cherry Pie" playing on the soundtrack despite the events of Camp Blood being set a few years before. These may seem like nitpicks, sure, but why go to the trouble of doing this kind of meta deconstruction if it's not for the fans and students of the thing being sent up?

More problematic is the fact that the film has no consistent rules, whether it's the ones set up for every slasher movie (including the order in which characters are supposed to die, or even if they're supposed to die at all) or how the "real world" characters are able to interact with the film. There are some amusing visual gags related to film construction, including giant titles that exist within the physical space of the movie or one character's ability to bring on a flashback as a way of avoiding danger. But the rules are constantly established and abandoned or changed as it suits the moment, and that's a problem in a film that's all about knowing the rules -- whether it's the characters trapped in a movie or the filmmakers who know the rules well enough to build an entire movie around them. Instead it's all over the place. 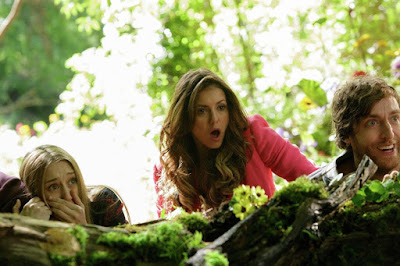 The film is a bit of a tonal rollercoaster, in one scene a broad comedy taking blind swings at a big, easy target, then in the next becoming an incredibly moving story about a young girl coming to terms with loss and a woman finding renewed purpose. That's all the best stuff in the movie; for something that's so candy colored and goofy for much of its running time, The Final Girls has a surprising amount of emotional depth. Malin Akerman has a scene -- ironically (of course) set to Kim Carnes' "Bette Davis Eyes" -- that is a beautiful piece of acting and filmmaking and one of my favorite moments in a movie this year. The last thing I expected from the film was for it to be really moving, but here we are. It's an impressive trick the filmmakers manage to pull off, and The Final Girls deserves to be seen just for that.

There's plenty of other stuff to like, too. The cast is all appealing and do good work in their respective parts, whether it's Nina Dobrev's thankless role as the bitchy ex-girlfriend (who fails to really be bitchy because again the movie keeps moving the goal posts) or Angela Trimbur's turn as the dim-witted Tina, a character in the movie-within-the-movie who has a Ritalin-fueled dance number that might be the comic high point. When the more "meta" visual jokes land, they really land and suggest a movie willing to go much further with textual weirdness. Then it switches back to being a fairly toothless spoof of slasher movies and some of the air gets let out. 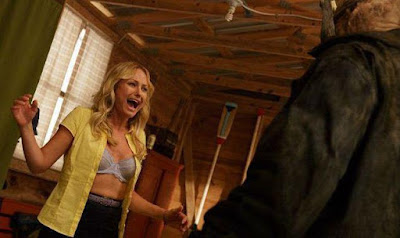 So here's a horror comedy that ends up not being all that funny and seems to only know horror movies in broad strokes, but which is worth seeing for its dramatic moments. Makes sense, right? The Final Girls still manages to be fun and the filmmakers seem to genuinely love the slasher genre, even when they are rarely able to get the details right. If nothing else, it's a movie that's trying to do something different within a well-worn genre and that's to be commended. It's a movie without any nudity, but the high points of which are a pair of stripteases -- one hilarious and one heartbreaking. I like the second one better.

The Final Girls is out today, October 9, in theaters and on VOD.
Posted by Patrick Bromley at 5:00 AM