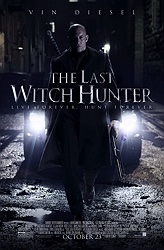 This movie’s bad. And I’m susceptible to movies about witch hunters.

The Last Witch Hunter is very dull and generic. It’s the type of movie that you will forget by November even though it was released on October 23rd. This is disappointing because I’ve grown to become a decent-sized Vin Diesel fan over the years, based mostly on his Dom character from the Fast & Furious franchise. I also like when he explores his geek cred in movies like the underrated Riddick. So, in short, I am the target audience for something like The Last Witch Hunter. The fact that it so under-delivers is notable. Throughout The Last Witch Hunter I felt like I was watching another Underworld or Resident Evil movie or a Lean Cuisine version of Blade. 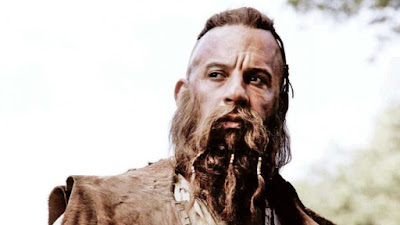 The plot in brief: A warrior named Kaulder (Vin Diesel) is cursed with immortality by a Witch Queen (Julie Engelbrecht in a performance mixed with some decent special effects that reminded me of the Evil Dead remake) after he seemingly disposes of her in the movie’s prologue. Cut to many centuries later and Kaulder is walking the Earth acting as sort of a witch/black magic detective. When one of his friends is harmed, Kaulder realizes the Witch Queen has returned and must face her again with the help of some priests (Michael Caine & Elijah Wood) and a good witch (Rose Leslie).

The most interesting aspect of The Last Witch Hunter is that it is a movie made primarily to appease Vin Diesel’s RPG fandom. I read that he’s been a Dungeons & Dragons player for many years and that his Kaulder character in The Last Witch Hunter is partly based on his old D&D character (Melkor), who was also a witch hunter. Diesel used a D&D strategy book to create his character for this movie. Also worth mentioning: apparently Diesel taught Judi Dench how to play Dungeons & Dragons on the set of The Chronicles of Riddick. I would rather have seen that as a documentary than The Last Witch Hunter in its current incarnation. This feels like a movie where they had an idea for a character but not for the story that sets him in motion.

The characters are a major problem with The Last Witch Hunter, as they are sketchily drawn at best and merely there to drive the functions of the plot. They don’t feel like real people who have been living and existing in a fantasy universe. They seem made-up as the story goes along. Kaulder is not one of the better Vin Diesel creations and his co-stars have very little to play either. Rose Leslie is cute and livens up her scenes for a short while, but seems stranded and Michael Caine is his usual dependable self but basically playing Alfred again. Caine’s scenes with Diesel are the only ones in The Last Witch Hunter that come close to working because they feel like two actors that got along hanging out with one another. Less successful is Elijah Wood, who between this and Cooties is striking me as not a very good adult actor. I remember him being a lot better back in the Lord of the Rings days. I admire the actor’s enthusiasm for genre material, but...I don’t know...he just feels so damn out of his league in movies of late. 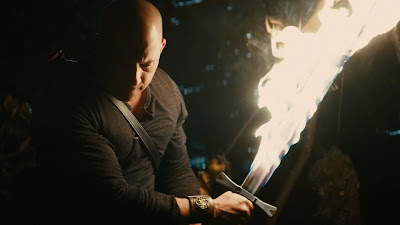 The Last Witch Hunter is an alternately boring and disappointing time at the movies, with a pronounced lack of inspiration in its storytelling. It feels like a director-for-hire job (the movie was made by Breck Eisner, who also made the underwhelming Sahara and The Crazies) as opposed to one person’s unique vision. As a result, it’s dull, lethargically paced, not very entertaining and has zero energy. This is one of those movies where you feel every second of its 106 minute runtime. I wish the movie took its pulpy premise less seriously because it’s drained of all fun. It needed to be more over-the-top. Instead, everything is just sort of mindless. It’s a movie you sit there and stare at while, not being engaged at all with what’s on screen. Once you’ve seen Vin Diesel jump on the back of one stock CGI-witch tree, you’ve seen them all.
Posted by Patrick Bromley at 5:00 AM