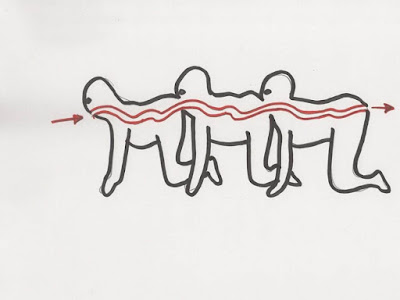 Shall I sing you a song? Or dance for you a jig? How about the promise of gore, blood and more wonderful slip slimery gore? (Fact: Slimery is a word, I just made it up.)

Finally we are enveloped in the best month of the year! Our warm embrace of blood, gore, unseen beings ripping things to shreds, mutated monsters coming to munch on living beings, oh how cozy it is! With so many ways to watch and a billion choices in which to get our choose on (Netflix This Movie being the go-to), aside from recommendations, what draws you in to a movie? A fancy image? A favourite actor? Or are you like me and can be easily swayed with a quick one or two liner of the promises held within.

But first, as is custom, a mandatory trip down my historical lane.

As a kid, we were taught by our librarian how to find out about whether a book was interesting or not. For hardcover, it was to read the inside jacket both front and back. For paperback, it was to read the back of the book. I can remember the process of searching for the right book taking forever as I picked up and sorted through dozens of would be contenders. The same could be said about movie rentals (when movie rental shops were a thing): I always found the hunt to be just about as exciting as the glorious moment of finding THE ONE. I would always catalogue the would-be contenders into my “remember me for later” corner of my brain... And with my memory being what it was (and is), the corner always proved to be a black hole of death where all my planned future entertainment went to die. (Thank God for “Notes” on my iPhone now!) The winners of my books and movie choices always tended to be witty and well-worded, almost a grab-me-by-the-face-and-command-my-freaken-attention style. 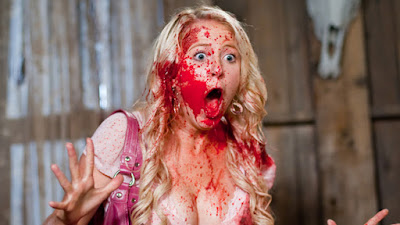 Which brings me to our current day, where we have a million titles at our fingertips through instant streaming and my favourite streaming machine, Netflix. How in the hell do you sort through a million titles to find the winner? I may not be here tomorrow, so I want to watch the best of the best right now. None of this saving it for later shit.

A good mini summary is all I'm looking for. Sell me the damn movie in the five seconds it takes me to click on the title. Cause that is literally how long my attention span is. (How I manage to sit still long enough to type this is beyond me.) Whether they be written by robots or written using an insert noun and/or verb here standard structure: “When (or After) so and so (or thingy thing) decided to go to the placey place, they had no idea that the such and such would be blahy blah. Or bling blong blooey?”

The Human Centipede:
After their car breaks down while in Germany, two American women wind up at a remote villa and soon find themselves trapped in a nightmare.

If I hadn't any clue of movies whatsoever, I could have innocently clicked on this, expecting a nice little romp about some crazy German giving people the ole stabby stab... Instead, poop in mouth, and there goes my innocence. (While mentioning poop would of course be a spoiler, I'm sure that there could be some other approach to prepare us for what we are in store.)

Lake Placid:
When bodies pile up around a Maine lake, a local fish and game officer teams up with a big-city scientist and a mythology expert to solve the mystery.

This says nothing about GIANT MAN EATING CROCODILE STALKS AND KILLS HUMANS. It could have just as easily been a story about a small town dude, a nerdy scientist and a Zeus fanatic stabbing people on a beach.

Mini blurb after blurb becomes more and more boring. Even the promise of blood means nothing if you can't make it sound the least bit enticing! 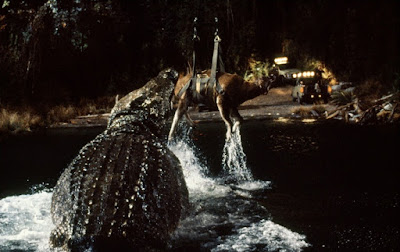 Cabin in the Woods:
Five friends arrive at a secluded cabin with clear rules for their retreat. But when protocol is broken, punishment is swift – and everyone will pay.

BORRRRIIIIING. This tells me nothing of what to expect. I like a little something to draw me in and this would most definitely have made me instantly skip past it. I would have never known the magical wonders that awaited me inside.

But enough with the crap, lets move on to a couple of my favourites! The inspiration for this piece actually came to me a few weeks ago when I was doing my usual browsing through the Netflix and came across this little gem that had me laughing out loud for a good solid minute. By myself. Which makes it all that much better.

Arachnophobia:
The itsy bitsy spider went up the water spout. It's covered in fur, loaded with venom and it's coming to kill you.

Curse of Chucky:
What in the freckled hell? A little monster is back in a cardboard box. He's not a good guy, but he's an absolute doll.

HAHAHAHAHAHA. What in the freckled hell? LOVE IT. 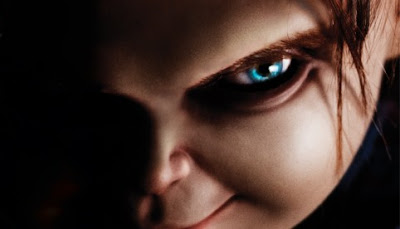 This is the End:
Rude, narcissistic and just plain weird. It's the end of the world as they know it, and they feel Franco.

Evil Dead:
Guests of this cabin can expect to be treated like human oysters - shucked open and swallowed soul first.

Because everything that is good this month could stand to be swallowed soul first.
Posted by Patrick Bromley at 12:00 PM