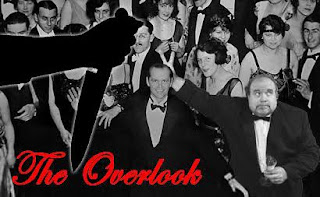 Now THIS is a monster kid!

Daniel Roebuck has enjoyed a successful acting career for more than thirty years. He first came to prominence playing Samson “John” Tollet in Tim Hunter’s amazing River’s Edge in 1986. Roebuck then played Cliff Lewis on the old Matlock television series for the next eight years. He memorably played Jay Leno in the HBO movie The Late Shift, detailing the “talk show wars” between Leno and David Letterman after Leno was chosen to host The Tonight Show and Letterman decamped to CBS. Looking at Roebuck’s filmography, it is easy to conclude that he has appeared in guest roles on every television show ever made: Star Trek: The Next Generation, The King of Queens, The Drew Carey Show, The West Wing, Nash Bridges, NYPD Blue, Six Feet Under, ER, Desperate Housewives, Law and Order, NCIS, Weeds, Glee, and I am leaving out dozens more. His most famous recent role was ill-fated biology teacher Leslie Arzt on Lost. Dan Roebuck is the definition of a working actor.

He is also a monster kid—unapologetically a monster kid. He once owned one of the best private collections of horror memorabilia in the world (dubbed “Dr. Shocker’s House of Horror”) until he suddenly decided to auction it all off for charity three years ago. Like Forry Ackerman before him, he let fans tour his little museum for free.

It is one of my great regrets that I never made it to Dr. Shocker’s House of Horror. (Tears) 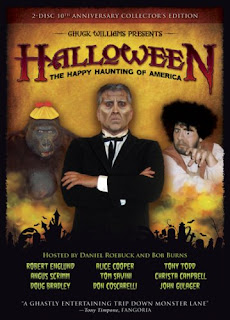 Halloween: The Happy Haunting of America! is a documentary produced and directed by Dan Roebuck and Chuck Williams. It’s a terrific film that all fans of Scary Movie Month would love, featuring taking heads Bob Burns, Robert Englund, Alice Cooper, Tom Savini, and Don Coscarelli. If that was all that the DVD contained, purchasers would be getting their money’s worth, but this is a two-DVD set crammed with the kind of extras we monster kids crave. Besides photo galleries and blooper reels, the main extra is “Dr. Shocker’s Halloween Spooktacular”, a recording of the live show put on by Roebuck and his friends at the Alex Theater, replicating the old spook shows of the forties and fifties. Dr. Shocker is Dan Roebuck’s alter ego, a late-night horror host of the imagination. 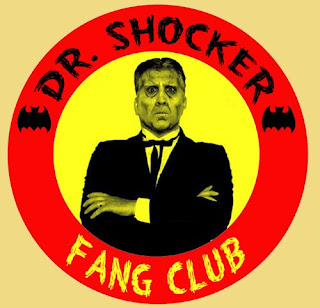 If one segment on a bonus disc doesn’t sound like enough Dr. Shocker for you (and really, how COULD it be enough?), do not despair. Dr. Shocker’s Vault of Horror is a fun re-creation of a fifties horror movie program, complete with lab assistant Igor, film clips, and plenty of home made, low-budget fun. The disc also includes the mini-doc “Monstermaniacs,” narrated by Roebuck’s Lost pal Jorge Garcia; a Roebuck lecture at a convention about all that wonderful Captain Company merchandise that was once advertised in the back pages of Famous Monsters magazine; a fascinating, if ultimately disappointing, “Paranormal Tour of Haunted Hollywood”; the short film “How My Dad Killed Dracula,” starring Roebuck; and best of all, a 3-D photo gallery of what was once Roebuck’s horror collection. 3-D glasses are included. I cannot emphasize enough how much fun this disc us, how much fun Dr. Shocker is, and how much fun Daniel Roebuck is. 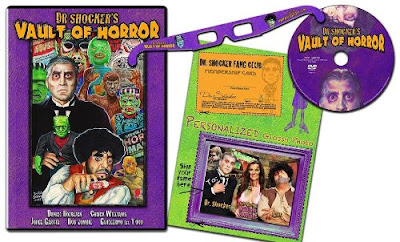 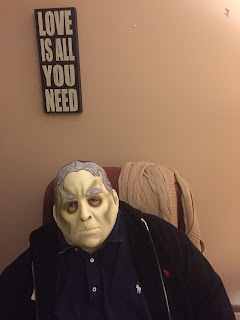 AN ANNOYING AUTOBIOGRAPHICAL PAUSE: I have met Dan Roebuck on several occasions and he is the nicest man on earth. Twenty years ago, I ventured forth to the second Famous Monsters Convention held at Universal Studios, Hollywood. I spotted Dan in a hallway, recognized him from River’s Edge, and introduced myself. He was at the convention as a fan, not a celebrity; he said I was one of the first to recognize him for his film work. We took a picture with him strangling me, a la his character in River’s Edge. 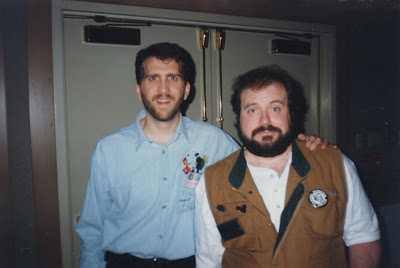 Twenty years later, I saw him at Mask-Fest in Indianapolis, where I brought up our previous meeting and jokingly suggested that I was stalking him, but very slowly in 20-year increments. Last year, I spoke with Dan again at Dark Delicacies bookshop in L.A.; he was there for a signing of the Don Post Studios mask book that he had helped produce. He said he “recognized me from somewhere” and asked if I had a copy of his Dr. Shocker DVD. When he found out that I did not, he promptly produced one from his bag, autographed it, and gave it to me. Again, he is the nicest. Also, free stuff! 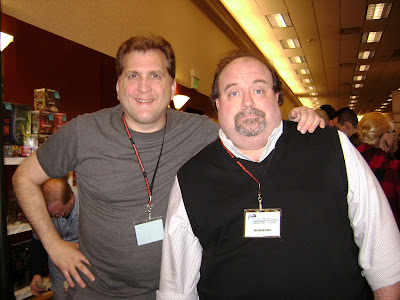 Thanks, Dan. Thanks for producing these two DVDs and thanks for helping us all to keep Halloween alive. Check them out, babies, to keep Scary Movie Month going any time of year.