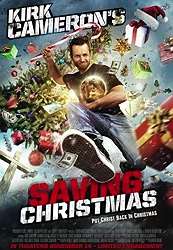 I was really young during the run of the TV show Growing Pains, but I’d seen a few episodes of the show in its later years and I was familiar with Kirk Cameron as a young actor from his role as Cousin Steve in Full House and the movies Like Father Like Son and Listen to Me – both of which I saw at way too young of an age to understand them. At the time, I liked Kirk Cameron. I thought he was funny. This was before he became an Evangelical born again Christian and steered his career to developing more faith-based material. There’s nothing wrong with that, but as a Jewish man I did not follow his work for many, many years until deciding to watch Saving Christmas. 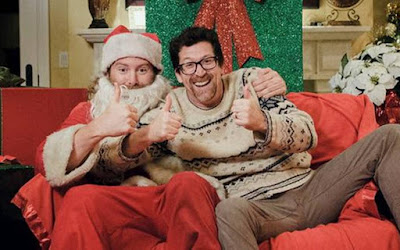 Why did I choose to watch this movie? Because it’s ranked as the 4th worst movie of all-time on IMBD and it’s a Christmas movie. Saving Christmas also won multiple Razzie Awards last year including Worst Picture, Worst Actor (Kirk Cameron), Worst Screenplay and Worst Screen Combo (Kirk Cameron and his ego). I kind of had to see it for myself. When I pressed play on the VOD rental of Saving Christmas -- which, I might add, was only 99 cents -- I was hoping to enjoy Saving Christmas in one of two ways. Either it would be so bad that it would be a bad-Christmas-movie staple to add to my collection for years to come or it would not be all that bad and I could defend Kirk Cameron’s “movie” (not the man, who has taken an antiquated and harmful stance on topics such as same-sex marriage), which is not a position that many people in the critical community take.

Unfortunately, Saving Christmas is neither of those two things. I’m definitely not going to defend it. It’s boring, poorly made and, worst yet, sanctimonious. But it’s not bad in a fun way at all, like, say, Deck the Halls, Jingle All the Way or Christmas with the Kranks. It’s a chore to sit through and feels like twice its 80 minute runtime. I can’t imagine even the most devout Christians enjoying this movie despite its messages (primarily defining the biblical roots of popular Christmas accoutrements like Christmas trees and Saint Nicholas) because the rationalizations the movie makes that are based in religion feel forced and clumsily put together. It feels like the Bible version of grasping at straws. So for its target audience this movie is a failure. For a movie audience, Saving Christmas is a nuclear wasteland of shit. 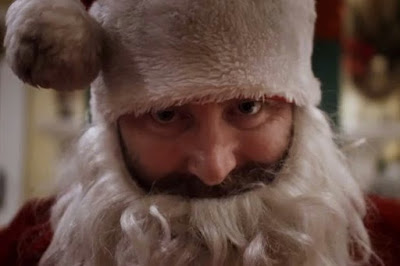 Let me provide some examples:

• The “movie” opens with Kirk Cameron, sitting by a roaring fireplace, telling the audience about why he loves Christmas. This lasts for 4 endless minutes in which Cameron pauses to drink hot chocolate three separate times.

• A conversation between Cameron and his on-screen sister is shot in shaky cam more suited to a Bourne sequel than a Christmas movie. The technique is never used again.

• There’s a comic relief bit by one of the characters (who is not listed on IMBD because it appear most of the cast wants to remain in anonymity) about why the office shouldn’t take away Freaky Shirt Fridays. It’s awful. This actor is basically the Evangelical Sinbad.

• Most of the movie takes place between Kirk Cameron and his on-screen brother-in-law (played by Darren Doane, the “movie’s” director and dead ringer for Andy Dick) sitting in a car basically having a sermon about Christmas because the brother-in-law has lost his faith in the holiday and believes everything going on inside his house (at a Christmas party) is a slap in the face to Jesus Christ.

• The movie cuts to some of the most shoddily produced biblical re-enactments that one can imagine with tons of creepy slow-motion photography.

• The two leave the car once the brother-in-law character regains his Christmas spirit and engages in one of the most drawn-out, bizarre and self-satisfied dance sequences ever put on film complete with Kirk Cameron doing “the worm”.

• The movie concludes with a feast where we just watch the characters eating. Seriously, there’s not dialogue. They just eat while Cameron provides a voiceover. The scene is introduced by Cameron literally running into the middle of the frame and saying that it’s now time to FEAST!!! 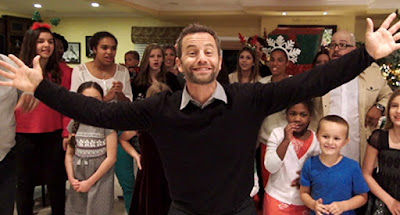 • The end credits of this 80 minute movie last 10 solid minutes. That might be a record.

I can’t believe I watched this thing. Needless to say I don’t think I’ll be diving further in the Kirk Cameron filmography.

Here’s the “movie’s” trailer which pretty accurately captures what it’s like to experience Saving Christmas.

Has anyone else seen this?
Posted by Patrick Bromley at 12:00 PM