After you've trampled someone for a new TV today, you can stream these movies on it! 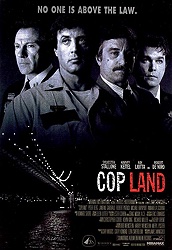 Adam Riske: Copland (1997, dir. James Mangold) Copland is a movie I want to be great when it's just pretty good and that's all. That aside, I find it very re-watchable and it's filled with good performances from actors you like (or should like) including MICHAEL RAPPAPORT! Spend your Black Friday with Rappaport, yo! I offered you a chance to be a cop and you BLEWWWWWWWW ITTTTTTT! 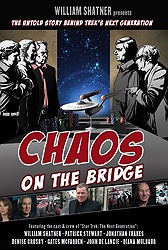 Heath Holland: Chaos on the Bridge (2014, dir. William Shatner) Earlier this year I wrote about this documentary from William Shatner, which explores the turmoil that plagued the creation of the television show Star Trek: The Next Generation. When I saw it, It had just hit iTunes and the streaming rental market, but now it has thankfully come to Netflix. I'm still hoping that one day we'll get a cut of this documentary that's longer than an hour because the film actually suffers from its running time, but until then I'm glad to see it hit Netflix where it can find a larger audience. 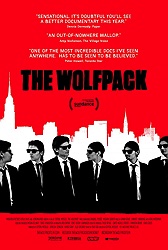 JB: The Wolfpack (2015, Crystal Moselle) This unique documentary had me perplexed when I first watched it. I thought director Moselle left too many questions unanswered—then the second half of the film began, and I realized that this was a very carefully structured film and I just needed to be patient. The story of seven children held under the thrall of their paranoid, delusional, alcoholic, abusive father, the film goes to so many places that the Lifetime Movie Channel synopsis I just provided could ever suggest. The subtext here focuses on big questions about the purposes of art in a person’s life, the responsibilities of a documentarian to her subject, and the nature of family. This terrific film reminds us that a short walk around the block, an evening’s visit to a movie theater, a sojourn at the beach, or a simple trip to an apple orchard can be a life-changing epiphanies. 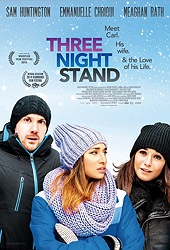 Patrick: Three Night Stand (2013, dir. Pat Kiely) This is one of those tough picks where I can't totally commit to the recommendation, but there's enough to like that I think there's value in it if you like this kind of indie romantic comedy drama relationship stuff. Sam Huntington and Meaghan Rath (both of the American remake of Being Human) play a couple who take a trip to a remote ski lodge that turns out to be owned by his ex (Emmanuelle Chriqui) with whom he is still obsessed. There's a ton of coincidental, formulaic movie bullshit on display here, but also a lot of really sharply observed stuff about relationships and the ways that couples communicate and can hurt one another. I wish there was more of that and less of people keeping dumb secrets.
Posted by Patrick Bromley at 5:00 AM