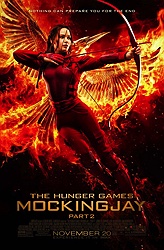 It’s like Harry Potter and the Deathly Hallows: Part 2, except not as good.

What’s with these convoluted titles to movies? Ugh. Anyways, how is The Hunger Games: Mockingjay Part 2? It’s a pleasant surprise of sorts. I had rock bottom expectations for the movie (because Mockingjay Part 1 was an epic bore) and I came away thinking this last entry was decent. I’m not sure if that qualifies as a recommendation for the movie, but fans of the series should come away happy with the conclusion to the Hunger Games franchise. I would rank this latest as my second favorite of the four movies after Catching Fire, but before the original and way ahead of Mockingjay Part 1.

When I make the comparison at the top to the closing chapter of the Harry Potter franchise it’s because both series share a similar issue for me: they are less interesting at their conclusion than they were at their beginning or middle. They seem to be marching to their finish line by design instead of under the sweep of the narrative. I should have been wrapped up in the events of the story but instead I’m watching them more as a passive observer than an enthralled viewer. I think part of the problem is these YA dystopian narratives have become so ubiquitous (The Maze Runner, Divergent, the upcoming The 5th Wave) that they rob every one of them of dramatic heft. It feels like just another franchise and as a result they have nothing original to say. 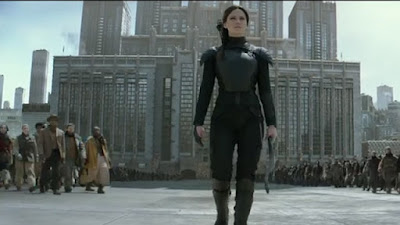 The plot in brief: The war between the districts and the Capitol continues as Katniss Everdeen (Jennifer Lawrence) must lead an army against President Snow (Donald Sutherland) with everything she holds dear hanging in the balance.

The Hunger Games: Mockingjay Part 2 has a phenomenal cast but part of my issue with the franchise as a whole is how underutilized everyone seems, and that is no different in Mockingjay Part 2. The cast is led by Jennifer Lawrence, who I adore as an actress but here seems at times committed and at other times bored, like she’s moved on already from the material. The other two leads (Liam Hemsworth and especially Josh Hutcherson) are lightweights who bring little to the table so Lawrence is left to do a lot of heavy lifting in the charisma department. The main supporting players this time include Julianne Moore (who is good here because she’s always good -- she’s Julianne Moore after all), the late Phillip Seymour Hoffman (who has little to do but most of that was due to his untimely death) and Woody Harrelson (who is a great actor but hasn’t had much of a chance to shine in this franchise since the original). To borrow from the great Gene Siskel, this is not a movie where the events are as interesting as watching a documentary of the cast having lunch together. 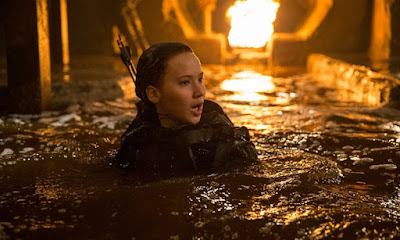 The first half of the movie is methodically paced (similar to Mockingjay Part 1) but picks up in what is the movie’s best sequence – an underground battle between Katniss and her team and a group of subterranean creatures. For a few minutes Mockingjay Part 2 has some suspense and urgency again, which haven’t been there since the thrilling cliffhanger of Catching Fire. It was enough to perk me up and remind me of why I liked this franchise in the past. After that showdown, the movie gets better and slightly more interesting up until its climax, which is handled in a way that undercuts the drama of what is actually happening. I’m surprised (considering what is taking place) that those scenes don’t land with more weight than they do. The movie also has a fairly terrible epilogue that, while staying true to the book (I’m assuming), also takes away a much better closing scene from the movie itself that happens just a minute or two prior to the epilogue. This might be a case where the director and producers seemed to be worried about leaving anything out (as to not draw the ire of the fans of the book series) rather than closing the movie on a more cinematic moment.

There are some things that I liked though about Mockingjay Part 2. For starters, it’s intelligent. I appreciate that the movie doesn’t dumb down its content for teen viewers and that it’s complex and political with a variety of different character motivations. The Hunger Games movies have always been good at asking for more of their audience than other franchises that are more mindless or suited for short attention spans. I also like that the movies are humorless except for gallows humor (mostly from Woody Harrelson, Elizabeth Banks and Stanley Tucci) because that’s how they should be. These are dark stories and they are handled appropriately. It doesn’t make me want to return to them much, but it’s the right decision for what they are. Lastly, they’ve created a compelling character arc for Katniss Everdeen, who believably goes from reluctant leader to active participant to spokesperson for a cause. The arc is more satisfying in this series than in most others where there is a “chosen one” because much of it is due to Katniss’ choices and skills and not to her leadership achieved through a sort of divine right. 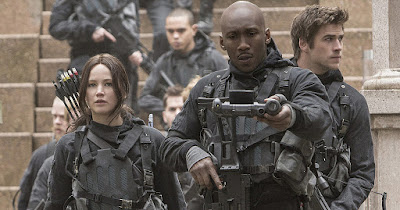 On the whole, The Hunger Games: Mockingjay Part 2 is a mixed bag but one I come away with being more for than against. I wish it had more suspense and authorship (it’s directed flatly by Francis Lawrence, which is a surprise because he gave Catching Fire a lot of vitality) but this closing chapter should please fans of the other entries in the series. I’m kind of glad it’s over but I didn’t hate the ride as it went along.
Posted by Patrick Bromley at 5:00 AM