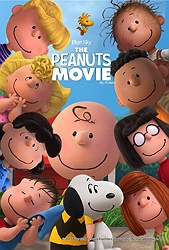 Before my showing of The Peanuts Movie this weekend, the latest attempt to revive Charles M. Schulz's beloved characters and their first feature-length outing since 1980's Bon Voyage, Charlie Brown (and Don't Come Back), I was subjected to a barrage of trailers for upcoming movies aimed at children -- children roughly the same age as my own, who were with me at the screening. To see trailers for the likes of Alvin and the Chipmunks: The Road Chip and The Angry Birds Movie is to gain greater appreciation for just how sweet and gentle The Peanuts Movie is. It's very clear that everyone involved with the film -- including Schulz's son Craig and grandson Bryan (who contributed to the screenplay) and producer Paul Feig -- wanted to do right by these characters and make a film you'd be happy for your kids to see. At this, they have succeeded. 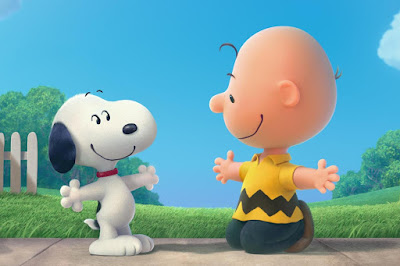 That might be the best news about The Peanuts Movie: they didn't mess it up. Many a fan of Charlie Brown, Snoopy and the rest of these wise-beyond-their-years kids expressed concern when it was first announced that Fox would be rebooting the Peanuts with a CG-animated film. This is because despite some really good films coming out of Pixar and Disney and occasionally Dreamworks, we have grown accustomed to kids' movies being real cynical garbage. We've seen beloved properties from our childhoods brought back to the screen with "hip" voice casts and fart jokes and obnoxious dance pop on the soundtrack, ignoring any possible cultural legacy in favor of appealing to the basest instincts of an audience who, just a few years prior, was still pooping in their pants. When a major studio announces that they're bringing back the Peanuts gang, it's safe to assume that they're going to mess it up.

But they don't. The Peanuts Movie is true to the spirit of the characters and the comic strip and, save for a few of those stupid dance pop songs on the soundtrack, feels timeless. At first, it actually tries too hard to be faithful to its source, cramming in as many fan service-y references as it can in its opening minutes. Eventually it settles down to tell its own story, essentially a feature-length adaptation of one of the original Peanuts strips in which Charlie Brown feels anxiety about the little redhead girl in class. Here she's a new student who inspires Charlie Brown to impress her through a series of would-be accomplishments, whether it's winning a dance contest or performing in a talent show or reading and completing a book report on War and Peace in the span of a weekend. His failures to succeed at anything can be a little tough to take in the early going -- the movie could easily have been retitled The Passion of the Peanut -- but by the time we get to see Charlie Brown perform a totally selfless act for his younger sister Sally the movie finds its big, beating heart. 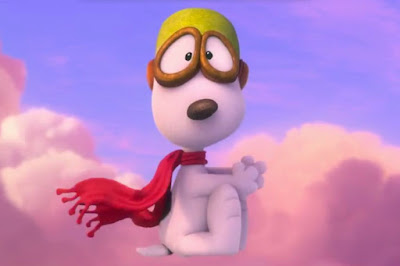 The movie is too long, its running time padded out by extended fantasy sequences of Snoopy imagining himself as the World War I Flying Ace in pursuit of the Red Baron that feel designed to insure that anyone who pays the 3-D upcharge feels they get their money's worth and to pad the running time (though, to be fair, these were my 6-year old son's favorite scenes in the movie). Otherwise, the episodic nature works, breaking the story down into small segments that recall Schulz's original comic strips. I also appreciate that the script (by the two Schulz descendants and Cornelius Uliano) keeps the stakes low; one can imagine a dozen different "modern" Peanuts movies that are nightmares of overthought, overcooked screenplays, but this one recognizes that in this case modesty is the best policy.

I like the animation, too. It's basically impossible to think that Fox and Blue Sky (who remind us that they are responsible for Ice Age by running an insufferably shrill "Skrat" short before Peanuts) would release a traditionally hand-drawn Peanuts feature in 2015 -- the wonderful and criminally underrated Winnie the Pooh taught us that lesson -- so the animators and director Steve Martino (Horton Hears a Who!) cleverly make the computer animation look a lot like an old Rankin/Bass stop motion joint by giving the characters slightly jerky movements and a lot of fuzzy textures. It gives the film enough of a '60s vibe despite the contemporary techniques being used to give the grownups in the audience fond feelings of the Golden Age of Peanuts. 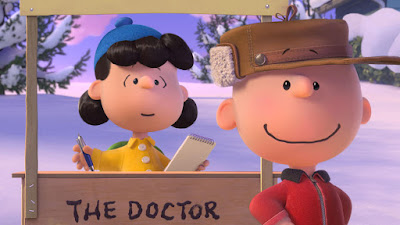 Though slight, The Peanuts Movie is exactly the kind of movie I'd prefer my kids watch over the majority of animated fare vying for their dollars and attention these days. It has a positive message -- people will like you for being a good person -- that it doesn't bang over our heads, it retains some of the subversiveness of Charles M. Schulz's original comic strips (people are lemmings and suckers for marketing, which means the movie is being critical of precisely the system in which it finds itself in the theatrical marketplace) and is gentle and sweet. Its existence is born out of a studio having an IP on which they hope to capitalize and profit, but there's nothing so cynical about the finished product. Everyone has their hearts in the right place on this one.
Posted by Patrick Bromley at 12:00 PM