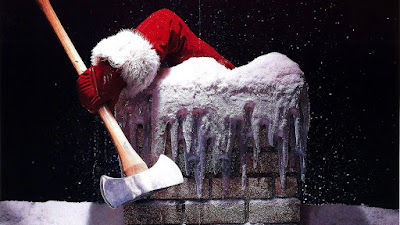 Is… Is that a skull under your tree?

Of course! Where do you put your Christmas skull?

We had friends over the other day and they noticed a skull placed under our tree. Apparently that’s a weird thing according to outsiders, but in our little home, our Day of the Dead skull wears many a hat, and tis the season for keeping the tree skirt in place and the would-be present thieves at bay.

This month has been one of discovering and falling in love with a relatively new genre to me (I have stepped a toe in once or twice, but never jumped in face first): Christmas Horror!

I made a list, checked it twice, ripped it up and started again. 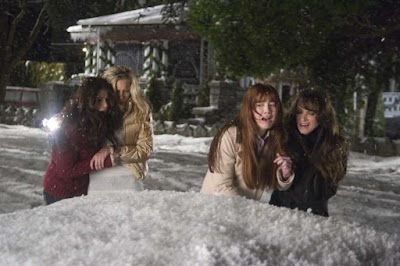 I probably should have done more than rip it up, as this wonderful piece of crap managed to make its way back on somehow, and was, in fact, the kick-off to my festive horror watching. I was somewhat curious about this loose remake of its far superior namesake, but with my curiosity sated, I am left unmoved. I love blood, gore and all of its sister companions, but not when it is achieved with zero creativity and beyond a lack of any beauty. Listen: when I see eyeballs being ripped out, I want it done in style -- funny style, if I might be specific, okay? 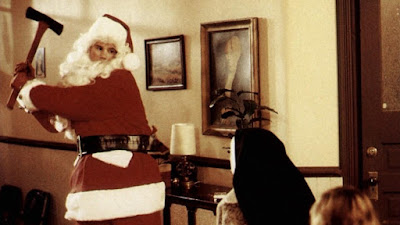 Wow, talk about back to back movies that are completely night and day, and aside from that comparison, no more shall be made! Asshole “Santa” murders your parents in front of your eyes, nuns at the orphanage attempt to heal you by forcing Santa on you, fast-forward a few years and it’s an inevitable conclusion that the ole brainski shall snap. (SPOILER) And snap it does. Blood, brutal slayings, Santa, boobies and beautiful gore in all its festiveness and despite the initial response on its release (oh the hoity-toity-ness of the '80s), it would seem that things just get better with time. 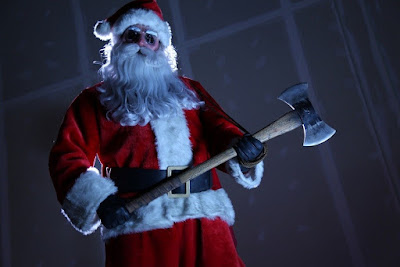 Another “remake,” this one loosely based on Silent Night, Deadly Night. Perhaps I watched it in the wrong order, as my attention was literally stuck on reminiscing about the better version of what I was currently watching. What interested me most was Malcolm McDowell at the helm and the promise of a flame thrower-wielding Santa. It was fine. I will most likely give it a re-watch next year, but will place it in a better order, I think, so my attention is more in tune with what is happening in front of my face and not behind it in my memory. 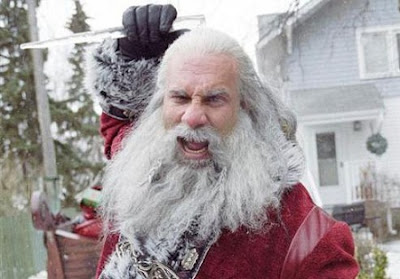 Apparently someone got the memo on how to catch and contain my immediate attention: the slaughter of a star-studded initial five minute scene (SPOILER), which includes the on fire head of Fran Drescher being submerged in egg-nog until she is no more. You have my attention, movie. Santa as we know him (a jolly happy soul) is in fact the spawn of the devil, and his birthday just so happens to fall on Christmas Day. And what better way to celebrate your birthday than to slay children? I prefer to drink tequila and snuggle cats, but to each their own. Oooh oooh, the clincher? Santa is played by former professional wrestler Bill Goldberg, so giant Santa and his over-the-top, wrestley hugeness is in full-force. 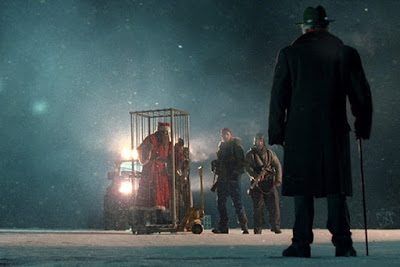 Being naughty or nice is nothing but a choice between life and death. Bam, it’s Christmas Eve in Finland, lo and behold, some dumbasses have unearthed the evil that has been trapped for years and it is no Coca-Cola Santa that emerges. This film was based on a collection of shorts (have yet to see them!), and the black comedy, the relationships between the characters, the simmering evil under the surface, combined with the creepiest elves I have known and the glimpses of the monstrous demon Santa make this one the best Christmas films I have ever seen.

So be good, or else Santa will tear you to shreds. Hmmm… So many potential Santa’s to raise my future children on! Grandpa got run-over by a hell-deer, protecting us from Santa, on Christmas Eve… You know the tune. I wish I could include a sound clip of me singing this to you. Things are better when sung!

Merry Christmas everyone!
Posted by Patrick Bromley at 5:00 AM