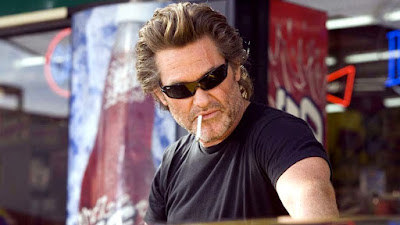 With Bone Tomahawk released several months back and now Quentin Tarantino's The Hateful Eight currently playing in theaters, there was a lot of talk about Kurt Russell (and his mustaches) in 2015. I have long been obsessed with Kurt Russell since I was a kid and basically wanted to be him (once I outgrew wanting to be Michael J. Fox which, to be fair, I never actually outgrew). It wasn't until I was watching Bone Tomahawk in late October that I finally came to a realization, writing something on Twitter to the effect of "I don't know why I always struggle to name my favorite actor when it is so clearly Kurt Russell." So there it is. With this in mind, I present over 24 consecutive hours of Kurt Russell movies. 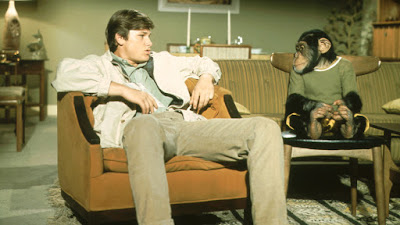 Kurt Russell made so many "family" comedies for Disney in the early '70s that it's hard to pick which one to start with, especially when I've never seen any of them. Reading the plot synopsis for several of them reveals a recurring theme: young Kurt gains super intelligence or young Kurt discovers a formula for invisibility or young Kurt discovers a formula for super strength. Not The Barefoot Executive, though. This one finds young Kurt befriending a monkey and the two of them pick hit TV shows together. Like, the story of a man and his monkey would be enough for almost any other movie, but then this one adds a whole aspect about network development? I can't see this fast enough. It makes sense to start here, not just because it represents the early days of Kurt Russell's career but also because it's early enough that my kids can join me for the first movie. 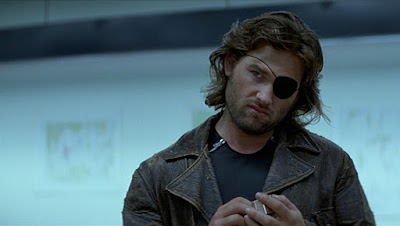 Because I hope to include three of Russell's collaborations with John Carpenter, I need to space them out. Plus I like the idea of starting with a Disney comedy -- which defined the first part of his career -- and immediately following it up with the film and performance that would help redefine him as a movie star. Along with Marge Gunderson of Fargo, Snake Plissken is one of my favorite movie characters of all time, aided no doubt by Russell's brilliant performance -- a swaggering, whispering takedown of the Clint Eastwood antihero that's funny without ever going for laughs. I love almost every single thing about this movie: I love the music, I love the visual effects, I love the cynicism. I love the Kurt Russell. 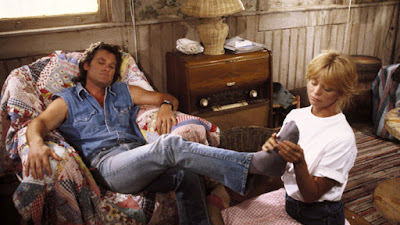 From what I can remember, Kurt Russell has only ever made one romantic comedy (unless Tango & Cash counts). Though he's a versatile actor, there aren't many romcoms for which he would be a good fit; I guess it's a testament to Overboard that it plays to his strengths, plus allows him to act opposite his longtime partner Goldie Hawn. When you actually consider the implications of what happens in Overboard it is completely repellent, but the stars are so charming and Garry Marshall's touch light enough that the movie manages to be super pleasant so long as you ignore the implications of the plot. Marshall would pull off this same feat just a few years later with Pretty Woman, another sweet and innocent-seeming romantic comedy made from dark and ugly material. 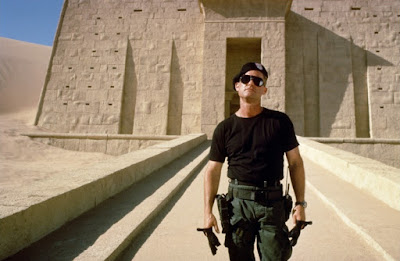 For the record, Stargate is not good Kurt Russell. I'm not even sure it's a good movie, even though I feel like watching it once every year or two and am convinced for the first few minutes that I love it until I don't. I'm including it here because when you're scheduling 24 hours worth of movies, you have to make sure that it's stuff you're going to want to watch, stuff that fits together and stuff that offers different experiences. Jonathan Mostow's Breakdown, for example, is both a better movie and a better Kurt Russell performance and could easily fit into this slot, but I have too soft a spot for big, goofy science fiction like this. Also I'm realizing I should have put Breakdown on this list. 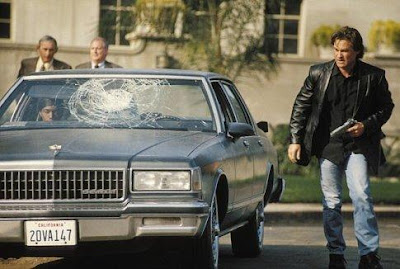 What is maybe the most underrated movie in this lineup (unless Tango & Cash counts) also features what might be Kurt Russell's best performance ever. Directed by Ron Shelton (working outside his "flawed athlete" wheelhouse) and written by James Ellroy and David Ayer -- the patron saints of police corruption stories -- the movie casts Russell as a corrupt L.A. cop in the days leading up to the Rodney King verdict and subsequent riots. If you've never seen this -- and there's a good chance you haven't -- you should rectify that immediately. The movie is terrific and Russell is next-level great, turning everything we love about him against us. 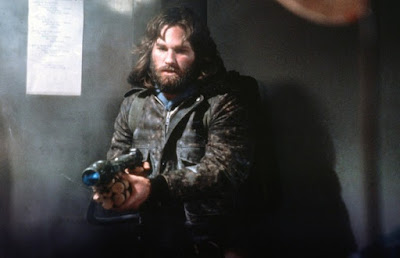 Well, it's getting to be nighttime now, which means we're due for another Russell/Carpenter collaboration. For my money, this is their best work together and one of the five best horror movies of all time. One of the things I love about the movie (and which was lost on me watching it as a kid) is that even though Kurt Russell's RJ MacReady is the de facto hero of the film, it's mostly by default. He does make a few heroic choices, but he's also kind of a prick and behaves like a scared guy trying to do a job. Like Carpenter, Russell is great at minimalism. It's no wonder they work so well together. 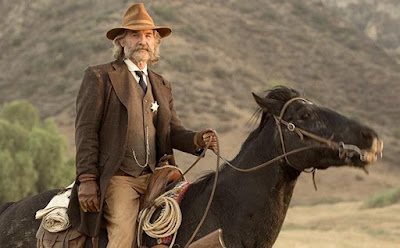 The most recent film in the lineup is a great western in which Kurt Russell plays a lawman leading a rescue party into the mouth of hell. I don't want to say more about what's in store for these men -- including Patrick Wilson, Matthew Fox and a brilliant Richard Jenkins -- but this is a good movie for this spot because it begins as something fairly traditional (few genres are more traditional than the Western) and gives way to nightmarish horror. That so many great actors, including a star of Russell's stature, would sign on to this very low-budget indie is a testament to the strength of the material. This is a brutal, beautiful film, with Russell -- as he so often does -- holding it together at its center. 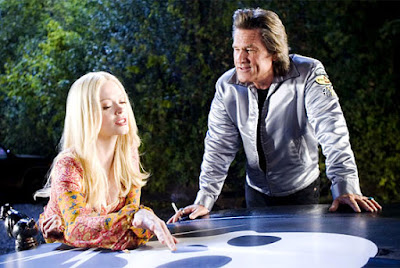 Taking the midnight movie spot is Quentin Tarantino's half of 2007 Grindhouse double feature, starring Kurt Russell as a slasher who uses his car to murder women. This is often referred to as Tarantino's "worst" film, but I don't agree with that a) because I love it and b) because I don't think "worst" and Tarantino's films belong in the same sentence together -- not yet, anyway. The role of Stuntman Mike was originally intended for Mickey Rourke, who probably would have been very good but who would have done something entirely different, and Kurt Russell is so good -- so charming, so menacing and ultimately such a cowardly pussy -- that it's impossible for me to imagine anyone else. His performance exposes the lie not just of all of cinema's killers, but of any American male who has ever tried to intimidate or hurt a member of the opposite sex. No way all of this is going on in anyone's "worst" movie. 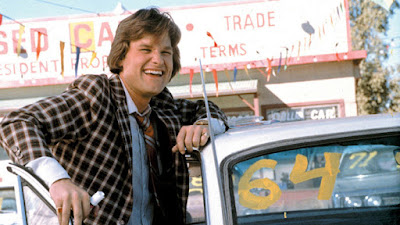 Though he's been very funny in a few films that aren't overly comic, Kurt Russell has only made a handful of out and out comedies (and one of them is Captain Ron for what what's worth). His first post-Disney comedy, Robert Zemeckis' second feature Used Cars, is probably still his best. Playing fast-talking, morally flexible salesman Rudy Russo, Russell turns on the charm and makes a case that there's some darkness and a little bit of insanity behind his big smile and infectious laugh (which you'll hear a lot of if you listen to the commentary track included on the DVD; along with the three he has recorded with Carpenter, it's a must-listen for Kurt Russell fans). This is one of the great anarchic comedies of the '80s. 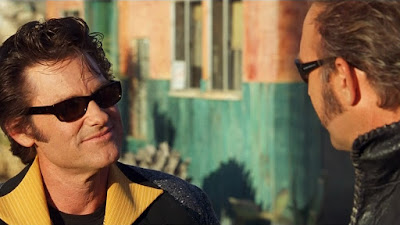 How great is Kurt Russell? He's so great that he manages to survive this mostly-terrible early 2000s action movie totally unscathed. This is a movie that opens with CGI scorpions fighting one another and doesn't necessarily get better from there. I'm not complaining -- I can literally watch it anytime it's on -- but this one seems to have gotten away from everyone. Russell co-stars with Kevin Costner as the leaders of a group of thieves who rob a casino dressed as Elvis, only to betray one another and get chased down by law enforcement and Ice-T carrying two guns and Courtney Cox as a single mom in tight clothes and a sarcastic kid masking his heart of gold. Costner is miscast as both a psycho and as an Elvis impersonator and the good cast (which also includes Christian Slater, Bokeem Woodbine, Kevin Pollak, David Arquette, Jon Lovitz and Thomas Haden Church) is wasted, but Russell is 100% charming and gets to riff on the role that made him famous in adulthood. The story goes that both Russell and Costner got to oversee totally different edits of the final film (which doesn't say much for anyone's faith in the director) and that Costner's more violent, action-heavy cut was picked by preview audiences over Russell's more character-focused version. See what happens when you don't trust Kurt Russell? You get 3000 Miles to Graceland. This movie is stupid trash that I can't wait to watch at 5 a.m. 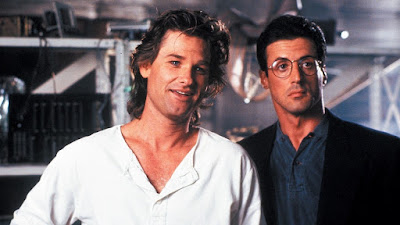 Speaking of stupid trash and chaotic productions. Few action films of the '80s are more wonderfully, gloriously stupid than Tango & Cash, which pairs Sylvester Stallone and a perfectly-coiffed Kurt Russell (stepping in for Patrick Swayze, who quit the movie) as rival cops trying to figure out who framed them and sent them to prison. Original director Andrey Konchalovsky was either fired or quit during production of this movie and Albert Magnoli was brought in to take his place, with scenes seemingly being made up as they went along. It's ridiculous and nonsensical and big and loud and so, so dumb and I don't care because I've seen this movie 20 times and practically recite it. If there was one movie that made me fall in in love with Kurt Russell at a young age, I suspect it was this one. Once again, he comes away from a disaster totally untouched. The guy is Teflon. 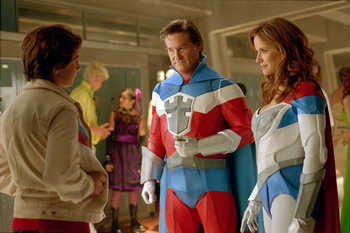 I know this is going to take us over the 24-hour mark, but I couldn't leave either this or the next film out of the lineup. Russell plays The Commander, a superhero whose son (Michael Angarano) is beginning a special high school for heroes despite not demonstrating any powers yet. Russell's role is limited, but he's hilarious as a guy who is sweet and heroic but not terribly bright. I still remember going to see this with my wife on a weekday afternoon and having basement-level expectations based on the marketing (we only saw it because it fit between two other movies we were seeing that day) and being beyond pleasantly surprised with what a smart, funny, colorful film this is. 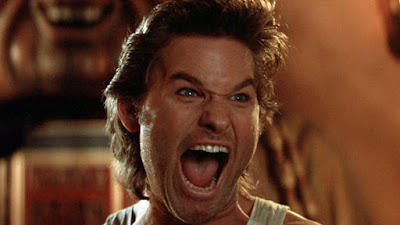 There's really only one way to close out a marathon of Kurt Russell movies: his fourth (but not final) collaboration with John Carpenter and arguably his silliest, though a case could be made for Escape from L.A. If not for Snake Plissken, Jack Burton would be my favorite Russell creation of all time -- the macho, swaggering alpha who seems like an action hero but who is actually the incompetent sidekick. Nearly everything about Big Trouble demolishes audience expectations, which might explain why it underperformed and didn't become a cult classic until its cable rotation. Russell's willingness to lay waste to movie star convention time and again is a huge part of what makes him one of the great actors of our time. He's got the looks, the dramatic chops and the physicality to do anything but time and again works without ego. He's the best.
Posted by Patrick Bromley at 12:00 PM