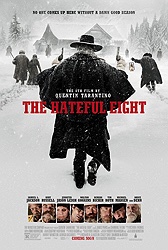 Note: This review refers to the 70mm "Roadshow" version of The Hateful Eight. It opens in a limited engagement beginning Christmas day. See this version if you can.

From the moment the lights went down and Ennio Morricone's haunting theme began as part of The Hateful Eight's overture, Quentin Tarantino had me again. For the eighth time in a row, he has made the exact movie I never realized I always wanted to see. No other filmmaker has quite the same hold on me. Part western, part mystery, part chamber drama, part black comedy, part polemic on racism, The Hateful Eight is another sprawling, ambitious and completely wonderful stopover in Tarantinoland, where the blood flows freely and every character speaks with his or her own kind of poetry. 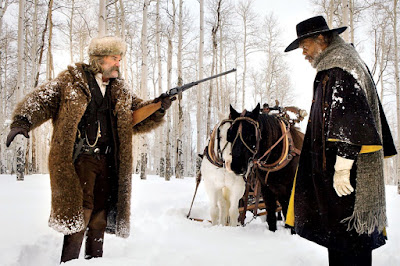 Adorned with one of cinema's greatest mustaches, Kurt Russell is John Ruth, aka "The Hangman," a bounty hunter in post-Civil War Wyoming who is bringing his latest charge, Daisy Domergue (Jennifer Jason Leigh), to the town of Red Rock to see her hanged and collect his $10,000. They get caught in a blizzard en route and proceed to Minnie's Haberdashery to hole up for a few days until the storm passes, but not before picking up two more passengers: Major Marquis Warren (Samuel L. Jackson), former Union soldier and now bounty hunter, and Chris Mannix (Walton Goggins), who fought for the South even after the war ended and is now being named sheriff of Red Rock. The wagon makes its way to Minnie's, where the party encounters a few more guests: British dandy Oswald Mobray (a very funny Tim Roth), cowboy Joe Gage (Michael Madsen), Bob, a Mexican man running the haberdashery (played by Demián Bichir), and former Confederate general Sanford Smithers (Bruce Dern). With the history of the war close behind them and a lot of money at stake thanks to Domergue's bounty, none of the men quite trusts one another. They're right to feel that way.

You'll notice that much of that plot description is given over to describing the characters more than what happens in the film. That's because once again Tarantino has made a movie exploding with great characters and, rather than conspire to rush them to this event or that, has simply chosen to put them all in a room together and watch what happens. The irony, of course, is that he has also shot the movie in Ultra Panavision 70mm and the super-wide 2.76:1 "Cinerama" format not seen since the '50s and early '60s (in films like Ben-Hur and It's a Mad, Mad, Mad, Mad World). It would typically be reserved for oversized epics -- which The Hateful Eight is of sorts, but it's an interior epic, one of conversation and character. Tarantino has said that in writing the script he was influenced by episodes of Bonanza and The Virginian. That would make this the most expensive, best-looking episode of Bonanza we've ever seen.

And it does look great. Collaborating once again with cinematographer Robert Richardson, Tarantino has put meticulous care into every inch of the frame without ever seeming overly fussy (Wes Anderson he is not). The opening act has the sweep of an old-fashioned widescreen epic, set against the snowy Wyoming landscape and capturing not just the cold but also how small these people are against the vastness of nature -- I was reminded of Vilmos Zsigmond's brilliant work in McCabe & Mrs. Miller. Then Tarantino moves inside Minnie's Haberdashery and, with few exceptions, really doesn't leave that location. It's here that the 70mm photography pays off in a different way altogether, not providing sweep or scope but rather every intimate detail of the set design: we get to know the textures of the clothing or a blanket hanging over a chair. The wideness of the frame lets us see the entire room even when two characters are just sitting at a table together, enjoying some stew and coffee. It's so like Tarantino to try to revive 70mm film (or just film in general) but using the confines of an Agatha Christie chamber mystery to do it. But if his goal is to showcase what film can show us that digital still cannot, he is successful. 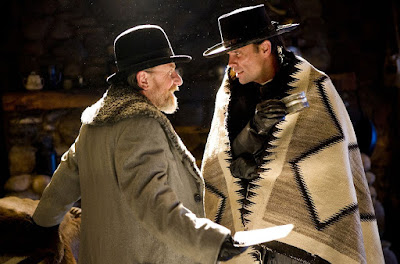 Not surprisingly, the cast is incredible. Kurt Russell continues to invert his hero image; with his John Wayne drawl (an expansion of Jack Burton), he explores the dark side of American western iconography. Samuel L. Jackson reminds us that he should really stick to working with Tarantino, giving yet another of his career-best performances. Jennifer Jason Leigh is fearlessly weird and almost feral, while Tim Roth proves that he can be really, really funny and offers a color totally different from the rest of the cast while not disrupting the overall vibe. Demián Bichir is also very funny, a stock character transported right out of a '60s spaghetti western, while Walton Goggins plays another variation on his slightly dopey redneck character but adds surprising depth and nuance. I've said before that Tarantino's legacy is going to be the enormous stable of great characters he has created over the last 20 years. Here he adds eight more.

Despite his reputation for writing scripts that are "talky" (which is, of course, their greatest strength), there are moments inside of nearly every Tarantino movie that reach a kind of giddy delirium -- like Brian De Palma, he doesn't subscribe to the notion of going over the top when it comes to certain elements of his work. There are beats in The Hateful Eight that would be disturbing and horrifying if they weren't also funny. This is, without a doubt, Tarantino's nastiest film, but that doesn't mean it is without any kind of moral center. There are characters in the film who, in the great western tradition, live by a specific code, and the movie eventually gives way to reveal some considerable and profound statements about race and American progress. Tarantino isn't credited enough with what a thoughtful and often political filmmaker he can be, particularly in his last three efforts. The coda to The Hateful Eight is disarmingly moving, all the more impressive considering what immediately precedes it. 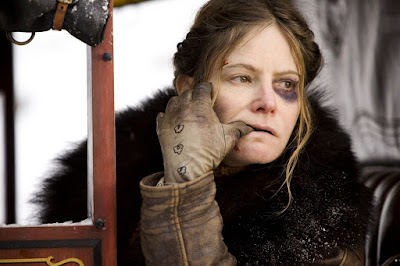 If there is a downside to the "roadshow" approach Tarantino is taking with the initial engagement of the film,  it's that it divides the movie up too neatly into two distinct halves -- the Hateful Eight we see after the intermission has a very different tone and agenda than the one we've seen before. It's a bit like the split in Kill Bill, allowing the audience to compartmentalize the film into pieces rather than take it as a whole. It's not designed to be two movies, but I suspect the split (even if it's only 12 minutes) will have some viewers favoring one half over the other instead of accepting it as an organic whole that doesn't shift gears so much as evolve and build towards its own inevitability.

The Hateful Eight is yet another great film in a body of work consisting of only great films. In its Road Show incarnation, it is a totally unique and vital moviegoing experience -- one that feels like a real event and won't ever be replicated on VOD or Blu-ray. Tarantino isn't just making movies that demand to be seen in theaters, he's making movies that demand to be seen period because they're fucking incredible. The Hateful Eight is incredible.
Posted by Patrick Bromley at 12:00 PM